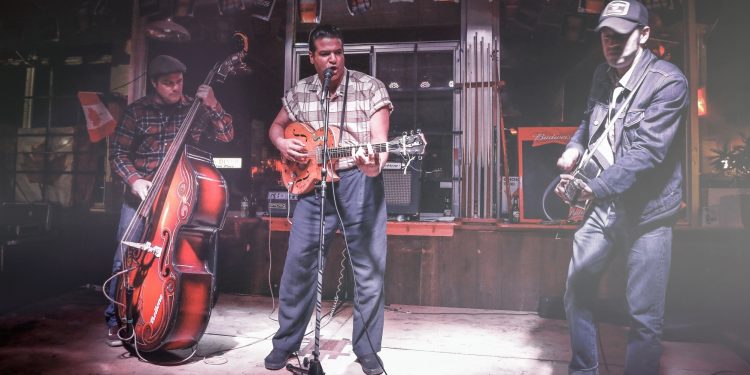 Cornwall Ontario – The one-man rockabilly band, Bloodshot Bill, returned to Cornwall for a concert on July 2nd at Lola’s Pub. This time, however, he didn’t play solo. He was joined by the Hick-ups.

It was a full house for the concert on Saturday night, and some in the audience were dancing along to the tunes.

“It was a great night! How could I describe it other than to say, absolutely stellar! Two high energy sets of Rockabilly madness and Bill’s one of a kind vocals had the crowd dancing all night long,” said promoter Robin McRae.

Bloodshot Bill, the Montreal musician, with his iconic slicked grease hair, has been entertaining audiences since 1998.

“I’m not exactly sure what my image is, I just do what I like,” said Bloodshot Bill. I am sure that I could put out a disco album and people would still call it “wild rockabilly” just because,” observed Bloodshot Bill.

Over the span of 18 years Bloodshot Bill has improved as a musician, but he still stays close to his musical roots.

In April, his most recent release, “Guitar Boy” came out on Norton Records.

Opening the concert was Doctor MoM.

“Doctor MoM was the perfect choice to open the show, with a Nirvana influenced grunge/rock, foundation shaking 45 minutes of fury. Thank you to all who came out to support the ever growing music scene in town. Who says nothing happens in Cornwall,” promoter Robin McRae added.