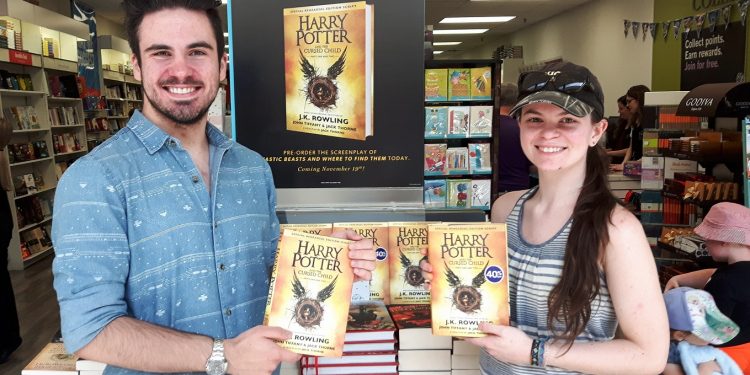 Cornwall Ontario – Harry Potter and the Cursed Child went on sale on July 31st. About 30 muggles (non magic folk) were in line at Coles in the Cornwall Square before the store opened at 11am.

No one had to use the “Alohomora” unlocking charm to make the gates of the local book store open.

Harry Potter and the Cursed Child is a new story by J.K. Rowling, Jack Thorne, and John Tiffany. It’s the eighth story in the Harry Potter book series and it is written as a screenplay. The world premiere of the play took place July 30th at London’s West End.

The story takes place 19 years after the Deathly Hallows. Harry Potter is an adult wizard employeed at the Ministry of Magic, he is married, and a father of three school-age children. The focus of the story is on his youngest son Albus.

Daniel O’Neil (23) and Chantale O’Neil (20) were among the first in line to purchase the book. Both are long time fans of the fantasy book series.

“I love the world created by J.K. Rowlings and I relish the chance to go back there one more time,” said Daniel.

In front of Coles there was a poster with the caption “The Muggle Wall” in which people could write what Harry Potter means to them. One person wrote, “that even muggles can experience magic”.

There were Harry Potter colouring pages set up on a table in front of the store too.

There was also a Prisoner of Azkaban wanted poster photo booth where people could take pictures pretending to be their favourite criminally insane wizard, the notorious and alleged mass murderer Sirius Black.

Small spoiler alert (read-on at your own risk). Harry Potter fans might be stupefied (stunned) to find out the secret behind the character of Delphi.

For those who want to experience the magic of the Harry Potter universe one more time, it’s not too late to hop on a broomstick or the Hogwarts Express to go and purchase the new book. Right now the new Harry Potter book is 40% off at the Cornwall Ontario Coles (and that’s no spell, but it sure feels like magic).