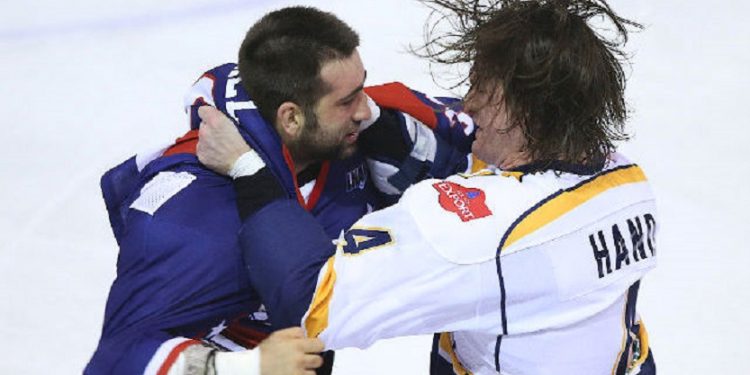 Cornwall Ontario – Ryan Hand will lend the Cornwall River Kings a hand and a fist this upcoming season. The River Kings blueline just got a whole lot tougher.

General manager Rick Lalonde has acquired Ryan Hand from Thetford in exchange for Olivier Croteau, who was picked up earlier this summer from Jonquiere.

In 37 games with the Assurancia last season, Hand chipped in a pair of assists and 163 penalty minutes. He has a 610 penalty minutes in 119 career LNAH contests.

The 31-year-old from Ottawa welcomes the opportunity to play in Cornwall, where he’ll surely be a fan-favourite.

“It feels pretty amazing to be a part of a team so close to home and I’m very excited to develop a relationship with the fans in the Civic Complex and have them cheering for me rather than yelling at me all game,” said Ryan Hand.

“Also this will be the closest to home I’ve ever played, so I have lots of friends and family that will be almost as pumped as I am that I’m now playing for the River Kings.”

Ryan Hand, a QMJHL graduate, has had pro stops in the CHL, ECHL, SPHL as well as overseas in the EIHL. He welcomes the changes made in Cornwall so far this off-season.

“I really like the moves that have been made in the off-season so far and its hard not to be excited for the season to start,” said Ryan Hand. “The fans should be pretty stoked to see what we bring to the ice this year.”

Croteau, 24, was acquired from Jonquiere earlier this summer along with Jeremy Vigneault-Belanger for draft picks.

Vigneault-Belanger, meanwhile, has inked a deal with the River Kings. The 24-year-old had 11 goals and 11 assists for 22 points in 21 games last year with Jonquiere. The 6-foot, 180 lb. forward has 93 points and 99 penalty minutes in 76 career LNAH games.

Kabbaj, a former Cornwall Colt, spent the last four seasons with Concordia University in the CIS. The 6-foot-2, 200 lb. Kabbaj picked up 33 points and 122 penalty minutes in 80 career games for Concordia.

The Cornwall River Kings have also signed draft pick Antoine Cote, who appeared in 21 games with the St-Cyrille Condors of the LHSAM over the past two seasons, picking up 71 penalty minutes.

River Kings forward Keven Veilleux has decided to pursue his career overseas in Slovakia. The towering centre had 13 points in 12 games with Cornwall last season. He remains on the River Kings roster for the time being.