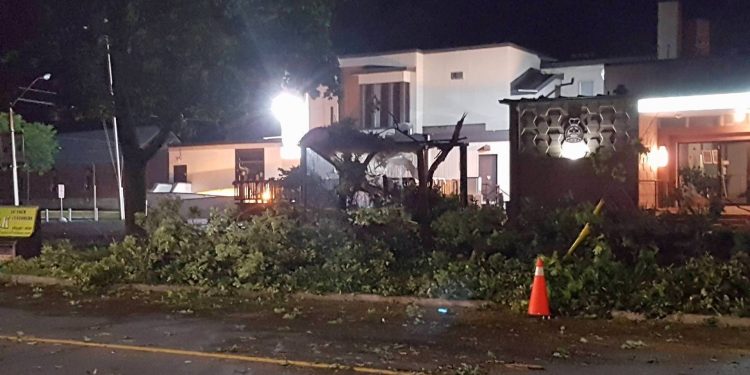 Cornwall Ontario – There were strong winds, heavy rain, and a lightning storm on Friday night. There were power outages in some neighbourhoods, and there was some damage to property including a bus shelter in front of the Legion on the corner of Second Street West and Cumberland Street.

There were more downed trees across from the Legion on Cumberland street along a residential stretch as pictured here. There are numerous reports of more downed trees across Cornwall including on Lynn Street, Fraser Avenue, Leitch Drive – and elsewhere. There was also a downed tree in front of St. Joseph’s Secondary School on Cumberland Street.

It was also reported on social media that a disabled man on Belmont Street found his handicap ramp blocked by fallen tree debris on Saturday morning. Within minutes of posting and asking for help, someone offered to come right over and assist in removing the debris.

Some residents say they were without water too.

A public reminder was posted by Kevin Lajoie on the City of Cornwall Facebook page reminding people to avoid calling 911 unless it is to report an injury, flames, sparks or a public hazard. If you see a downed tree on a City street please report it to Municipal Works at (613) 932-5354.

Ribfest shut down early Friday night because of the massive storm, but the festival continues Saturday and Sunday.

The photos above are courtesy of Kayla MacLeod and used with permission.

Interview with Medictation who play House of TARG on August 1st