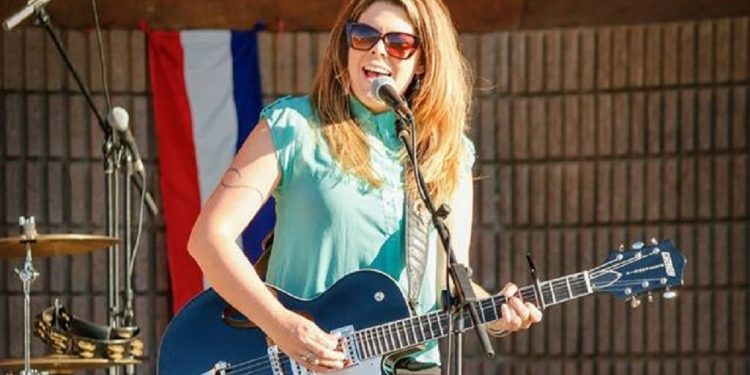 Queens Park – This July 1st was extra special for Cornwall raised musician Melanie Brulee. The former lead singer of The General Electryk has been making a name for herself since moving to Toronto. Just recently she had the opportunity to play the main stage at Queen’s Park in Toronto Ontario on Canada Day.

“It was a great honour to represent Franco-Ontarians during the Canada Day celebration at Queen’s Park. This show continued our fun run of a summer packed with some great festival stages such as the Francofolies in Montreal, Festival Franco-Ontarien in Ottawa, the Montreal Folk Fest on the Canal and the Luminato Festival in Toronto – and that was just June!” says Melanie Brulee.

“I’m quite enjoying having a lot of room onstage – knowing that my band is really tight helps me let loose too, filling up that space with dancing and connecting with my bandmates and he crowd,” confided Melanie Brulee.

This July Melanie Brulee is going on tour with Anique Granger, and she also has a concert scheduled in Cornwall this coming August too.

“I’m heading out on tour with Anique Granger in July for the Northern Lights Festival Boréal in Sudbury and the Mariposa Folk Fest. We’ll also be playing at Kelsey’s in Cornwall on August 25th,” added Melanie Brulee.

What’s next for Melaine Brulee? The Franco musician will be hitting the studio in the fall. This time she will be strapping on her cowboy boots, adding a twist of country on her next album.

“In the fall I’ll be starting to work on a twangy country album. Tassels and cowboy boots baby, that’s where we’re heading,” confided Melanie Brulee.