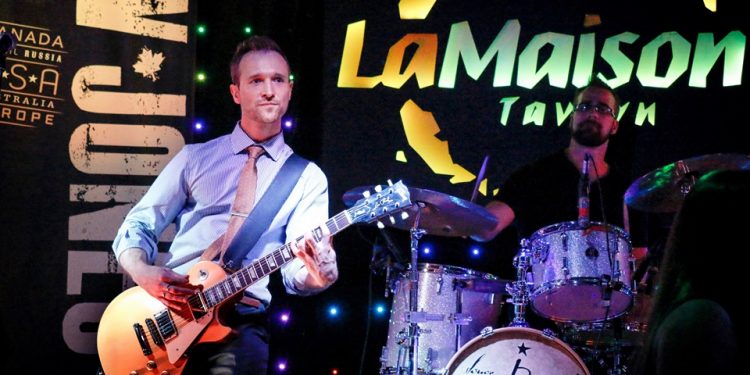 Cornwall music fans might be familiar with some of the bands on this year’s Ottawa Bluesfest line-up. Last year Juno Nominated Blues musician JW Jones played at La Maison Tavern, while Rebelle played a concert at Lola’s Pub last month, and the Paul Deslauriers Band and 2011 Juno Blues Album of the Year winners MonkeyJunk each had recent concerts at the Port Theatre.

JW Jones shared his experience of being nominated for a Juno Award and attending the Junos in an interview with this newspaper last year. His album Belmont Boulevard was nominated for best Blues Album of the Year.

“Belmont Boulevard (Blind Pig / Stony Plain / Warner) is a great record, and a big part of that is Grammy award winning producer, Tom Hambridge, who did an amazing job. We recorded in Nashville, and he brought some heavy hitters, including Reese Wynans from Stevie Ray Vaughan and Double Trouble to play keys. In fact, the Juno nomination actually meant so much more to me after attending the event than it did when I first heard the news. I think it took some time to sink in and realize how special it is. The vibe of the entire weekend was happy and positive, and felt so good to be immersed in it. It’s pretty sweet to be at this stage of my career, rubbing shoulders with so many talented folks, both artists (Alanis, Daniel Lanois, Paul Brandt, Kira Isabella) and industry (Warner Music reps, etc), and I am extremely happy about where I’m at right now. Life is grand,” said JW Jones.

JW Jones has had many memorable highlights as a musician. He shared two of those highlights in an interview with this newspaper last year.

“There are two career highlights I’d like to share. The first was a couple of years ago when I went to see Jimmie Vaughan in Hamilton. I walked into the dressing room, and Jimmie spotted me, came from the other side of the room and extended his hand, saying “hey man, I watch you on YouTube!” and then invited me to sit down and tell him how my career was going. I was beside myself. We spent before and after the show hanging out and chatting about everything from his farm animals to guitar tone. All of that led to me writing a song with producer Tom Hambridge called “What Would Jimmie Do?”. The second was this past spring when Buddy Guy joined us on stage at his club in Chicago, and then invited me to play as his guest on stage with him and his band for two shows in Ottawa. I had some really special moments with Buddy, and it felt like he was putting some wind in my sails to carry the blues torch forward. I’ve been listening to both of these guys since I was 14 years old, and now I am spending time with them and trading riffs. I’ve been extremely fortunate,” JW Jones reminisced.

What can music fans expect from JW Jones in concert? Those attending Bluesfest will be in for a treat. Even if you’re not a blues fan, a concert by JW Jones will probably change your mind.

“We put on a high energy show, full of twists and turns to keep the audience engaged musically and visually. Most of what we do is improvised and happens differently at every show. Oh, and if you don’t know much about blues or don’t like it, come check it out, and I guarantee you’ll be converted before you leave the venue” added JW Jones.

Tickets are available at the front gate. For more info on Ottawa Bluesfest including the full line-up and schedule visit their website.