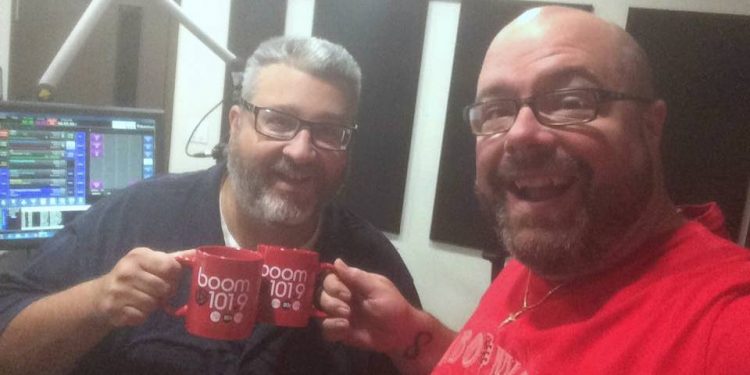 “Working the morning show on Boom 101.9 FM is the most fun job I could ask for. It gives me so much opportunity to work with the community for many of the great events that happen in and around the city,” said Dan Allaire.

They say that time flies when you’re having fun, and the first two years went by very quickly for these two radio jockeys on Boom Breakfast.

“It’s hard to believe that it’s been two years already. It’s seems like yesterday that Dan Allaire and I were paired together to launch the new boom 101.9 morning show that featured the best music of the 70’s, 80’s and 90’s. When we started out as a team two years ago we agreed that all we wanted to do was have a three hour conversation that folks could listen in on and maybe walk away from it every morning with a smile on their face. Hopefully, we’ve succeeded in that. It’s been two fun years and for us the hope is we’re just getting started,” stated Bill Hallman.

Each host has fond memories of being on the air and working with the community.

“What stands out the most is the response we get from listeners when we do something like Stuff the Studio before Christmas for St.Vincent de Paul or even more recently Stuff the Bus for Agape. We are nothing without the support of our audience so they deserve most of the credit for our successes,” said Dan Allaire.

“My fondest memory of the show so far is a segment we did a year ago where we discussed coffee beans that were excreted by a certain type of cat. That was funny enough but as Dan began to describe something similar with elephants I lost it live on the air laughing so hard we had to cut to commercial. It still makes me laugh today,” Bill Hallman added.

The biggest challenge of hosting a radio show earlier in the morning? Waking up of course! That’s what the large coffee mugs are for, right?

“Bill is easy to work with despite having to nudge him awake 4-5 times per morning. We get each other and have a good chemistry that seems to work. We really are like an old married couple or the old hecklers from The Muppet Show,” says Dan Allaire.

Listen to Statler and Waldorf on the Boom Breakfast weekdays from 6am to 9am on Boom 101.9 FM.