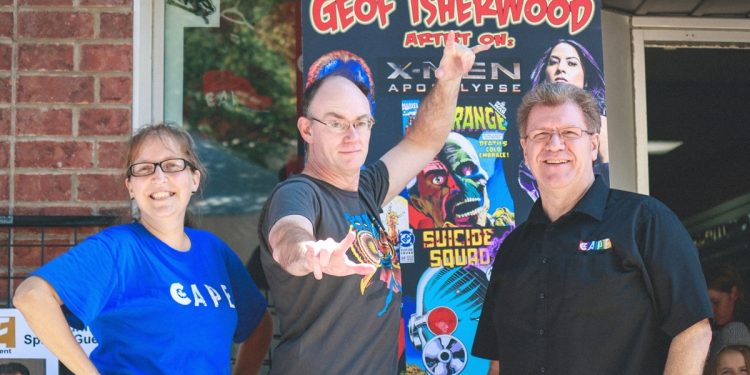 Cornwall Ontario – Comic book artist, film concept illustrator and storyboard artist Geof Isherwood visited Fantasy Realm (today) on Saturday August 20th. He is at the store from 10am to 5pm.

“It is a very exciting time to be a comic book fan. Even with the digital age upon us, the print version of comic books continue to increase in sales. One of the biggest reasons for this is the connection between the creator and the fan. More and more comic book artists and writers are appearing at conventions and special appearances to meet their fans, make new fans, and to sketch and sign comic books, you can’t do that on a digital file. We were very fortunate to have Geof Isherwood appear at Fantasy Realm because he certainly has a busy convention schedule, and it will be an extremely busy day with the Cornwall Food Fest taking place in Downtown Cornwall the same day,” says Fantasy Realm owner Randy Sauve.

Geof Isherwood has done work for Marvel Comics including such titles as the Silver Surfer, Conan the Barbarian, Daredevil, and Doctor Strange. He has also been a penciller and inker for such titles as The Astonishing Spider-Man, the Fantastic Four: Atlantis Rising, and X-Men.

Pikachu spotted near Mocktails this afternoon