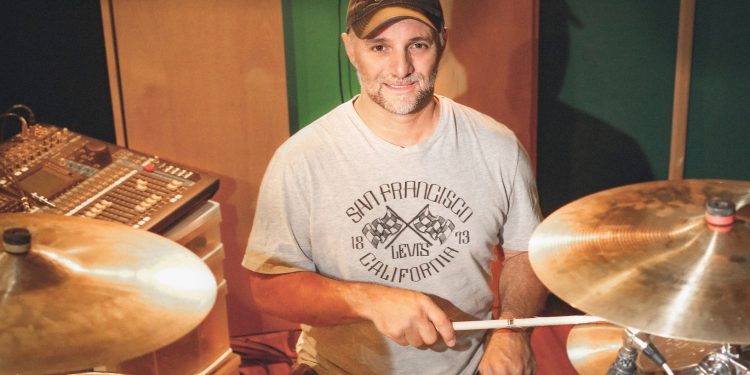 When Cornwall drummer Roy Nichol joined April Wine in 2012, he wasn’t just joining a classic rock band, he was joining an important part of rock history. The journey to joining April Wine began when Roy Nichol was drumming for a band called Sam Hill, however his journey to becoming a professional musician began when he started drumming at the age of 15. Now 58 years old, Roy Nichol has played in a slew of bands including April Wine, Sam Hill, the Stacey Thorn Band, Shotgun, Steeler, and Spare Partz. Roy Nichol recalls vividly the phone call and band practice with Myles Goodwyn that lead him to become their drummer.

“It started when the band Sam Hill was playing here, at Dream Builder Studios, for a Halloween party. Mark Owen, the owner of Dream Builder Studios, has a company called Indie Guitars. Myles Goodwyn uses one of the Indie Guitars. So Mark called him and asked if he wanted to come to the Halloween show we had. Myles says sure, and him and Steve Segal came. They saw me play in 2011.

Time went by and all of a sudden a mutual friend of ours, Art O’Reilly who owns Strung Out Guitars calls me and says Myles Goodwyn is looking for you. Myles Goodwyn? He says yes, here is the number, call him. I called Myles, and Myles says yes I’m looking for a drummer for my opening act to open for April Wine. Myles says he is going to be in the opening act, it’s just him. We had a meeting and he says to learn these 3-4 April Wine songs. That was mid-week on a Wednesday, and he said come to my place and we’ll jam on them. We went to his place, and we talked for about an hour, walked around the place and got a good feel for each other, then he said lets jam on some songs.

So it was just me and him playing some songs, and then at the end he says, I got to level with you, I need a drummer for April Wine. He said, you got the job if you want it. I said I’ll take it. He said we have two days rehearsal, Monday and Tuesday, then we’re in Alberta for six gigs right off the bat. So it was pressure to learn all the songs in that time frame, but it worked out fine. Here we are in 2016, and I’m still in the band,” Roy Nichol recounted.

April Wine, who formed in 1969, have had many accolades. They were inducted in the Canadian Music Hall of Fame, nominated for eleven Juno Awards, had several albums go gold and platinum, were on the Billboard Top 200 charts for 40 consecutive weeks, and they opened for bands like the Rolling Stones, Styx, Journey, and Rush. The band enjoyed commercial success both on the radio and on MTV. What does that history and playing with those musicians mean to Roy Nichol?

“It’s hard to conceptualize what that history is because at the time I was not part of the band. People tell me, oh you must be a rock star. I’m not a rock star. I play with rock stars. They’ve done all the leg work. I’m filling in for Jerry Mercer, a fantastic drummer, and one of my idols when I was younger. I’m just coming in. I’m a part of the band, I do my job, and we play well together, but I’m not part of their history.

At first you’re a little intimidated of course, and not just playing with Myles Goodwyn, but with Brian Greenway too. He joined the band in 1977. I consider him a part of the original band. He’s been in every recording, every concert, and every gig since 1977. But playing with Myles, after while, I’m just doing my job. I’m not star struck or anything. We have a camaraderie between us. We play good as a group. The whole group sounds good with Richard Lanthier playing great bass, the rhythm section together is good and tight. He wants me to play drums and to play well. It’s an easy job for me,” says Roy Nichol.

47 years after it’s original inception the band continues to tour and fill venues to capacity. April Wine still tour Canada and play festivals and gigs in the United States and Europe. Roy Nichol gets to experience the magic of April Wine first hand from behind the drumkit – whether he is playing Monolith or DW drums. His favourite April Wine song to play is “Oowatanite”, because of the memories the song evokes.

“I always liked doing “Oowatanite” because I learned that in 1978. That song brings me back to when I was 19, practicing with my friend Greg Cox, and moved to Calgary, and we would play on the front porch of his farm house. That was a tough song to learn, to get those shots right, but now as you get older, you’re like, wow that’s a really easy song. It tells me I did make an improvement since I was 19. That’s just a memory, just like every other song, like Roller, I remember where I was when I heard that. It brings you back I guess,” said Roy Nichol with a grin.

April Wine last released an album ten years ago in 2006. The band has no plans on releasing a new album.

Roy Nichol and April Wine played all the hits at Lift-Off 2013, and helped create some awesome memories for Cornwall music fans, when they played his hometown together for the first time. One of April Wine’s top songs is “I like to Rock” and it turns out so did Cornwall Ontario. Despite a blazing heat wave over 5000 people attended a Sunday afternoon show to see April Wine rock live in concert.

“All my friends were there to come out and support. And it was extremely hot! I remember my kids there, and I got pictures of my kids, they are soak and wet because it’s so hot. Richard Lanthier, our bass player, almost fainted on stage because it was so hot. The sun was just beating down that time of day. It was the hottest day of the year. It was still great and everyone loved it”, Roy Nichol added.

Although there is no specific date planned for an upcoming gig in Cornwall Ontario, Roy Nichol is confident the band will play Cornwall again sometime in the future. In the meantime, Roy Nichol can still be found playing the occasional show in Cornwall.

“I still play around with a band called Spare Partz, with my brother Peter Nichol, Mike Tessier, and Kelly Heenan. I play the odd gig with them. Sometimes I’ll go and sing with the Lost Boyz when I’m at one of their gigs, because we’re all really good friends. Right now I’m working on a project with my brother Peter Nichol, Mike Tessier, and myself. We have an original band coming out shortly. Because I use to sing in a Journey tribute, and we did all the Journey stuff with Sam Hill, it kind of sounds like Journey but a bit newer too. So that’s the big project I’m working on now,” Roy Nichol concluded.

For more information on April Wine visit their website.