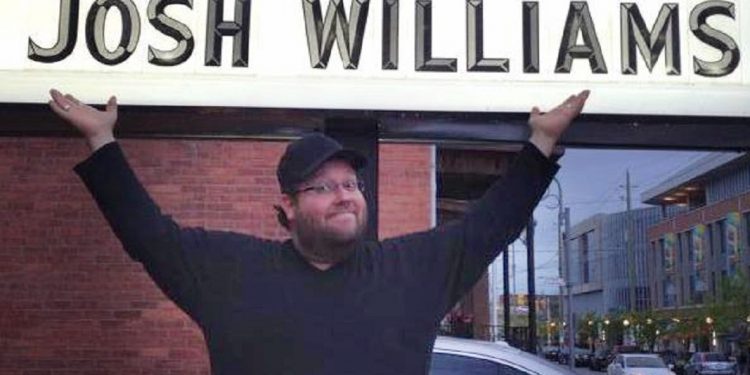 Cornwall Ontario – Comedian Josh Williams, who played an extra in a Trailer Park Boys movie, will be in Cornwall on Thursday August 11th to headline a comedy show at the grand opening of Boomerangs.

Josh Williams is credited as playing the background character of a stoner in the Trailer Park Boys movie “Don’t Legalize It” according to IMDB.

“I was in the movie for a short scene. It was just for one day. We were on Parliament Hill on 420 and it was filmed guerilla style. It was a fun experience, but it was a little different. I’ve been on sets before, but never filmed guerilla style. We had to do it quickly before everyone there noticed Ricky and Bubbles and rushed to get their autographs”, Josh Williams reminisced.

The Trailer Park Boys movie, which was released in 2014, can be streamed on Canadian Netflix.

Should Canada legalize it?

“I’m personally indifferent. If alcohol is legal, pot should probably be legal too, but I could care less. It has no impact on my life”, Josh Williams confided.

In addition to the Trailer Park Boys movie, Josh Williams is also an award winning comedian. He twice won “Ottawa’s Favorite Comedian” in Faces Magazine, and he was also a nominee for Best Stand-Up Newcomer at the Canadian Comedy Awards.

The Ottawa based comedian finds humour and inspiration in his own daily life.

“I find my life funny. I don’t take myself too seriously. Some people do, and nothing is funny to them. I live a goofy life, and silly stuff happens to me. I’m not embarrassed too easily”, said Josh Williams.

Josh Williams, despite finding a measure of success in comedy, knows first hand the challenges that comedians face here in Canada.

“The biggest economic challenge of being a comedian in Canada is that we only have 6 or 7 major cities and they are far a part. The amount of money made, unless you are a headliner, only covers the cost of travel. I have two day jobs. I deliver pizza’s for Domino’s and I work for Uber taxi services. I’m one of the top working comedians in Ottawa and I still have my day jobs. In the United States it’s different. They have bigger cities and they are closer together. My closest cities are Montreal and Toronto, and you’re on rotation so you can only perform there one week a year. The farthest I have traveled was Windsor, and that was just for a weekend of shows.

Despite these challenges, Josh Williams continues to follows his comedic passion.

It’s easy to see why Josh Williams is loved by audiences. The Ottawa comedian is a fan favourite with his quick wit and crowd interaction.

“My live show is non stop hilarity. It’s an interactive experience. I talk to the crowd and engage. It’s not just about me, I get to know them too. We laugh at me and at them”, Josh Williams concluded.

Local favourite Mark Vincent will be hosting the event.

“I’m excited about the new venue, it really sets up well for comedy. Atmosphere is a big part of what makes a great show and this venue has it,” comedian Mark Vincent added.

Boomerangs is located at 1142 Brookdale.