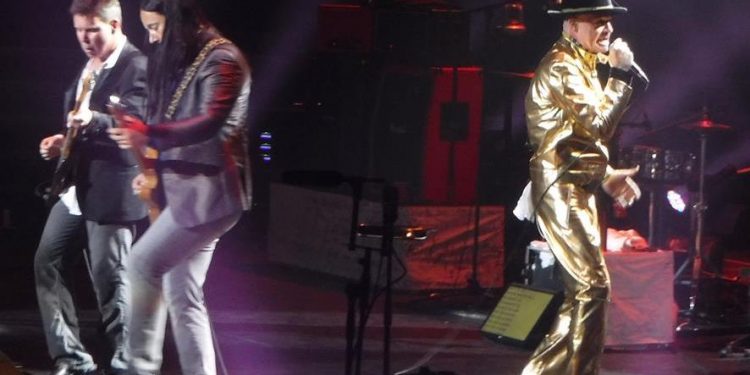 Ottawa Ontario – On Thursday, August 18th, 2016 the Tragically Hip played their second last show, on their Farewell Tour, at a sold-out Canadian Tire Centre in Ottawa.

Some local music fans shared their experience seeing the Tragically Hip on Thursday night for one last time.

It was an emotional and energetic night for fans who were saying farewell to Gord Downie who has terminal cancer.

That emotion was reflective in the atmosphere according to Bob Peters who took the photo above at the Ottawa concert.

“The atmosphere at the show was amazing. There was definitely an emotional undercurrent in the audience throughout the concert, a true appreciation of the art of Gord Downie and the Tragically Hip,” Bob Peters described.

The show meant many different things for the fans in attendance. For Melissa Martin, the show was nostalgic, and brought her back to her childhood.

“As a concert enthusiast and an avid music lover, it saddens me to say that this is my one and only time seeing the Hip. Growing up with older sisters in the late 80s early 90s, I remember stealing their tapes while they were away and singing ‘Hundredth Meridian’ loudly in my room. Hearing their music brings back so many great memories. The atmosphere last night was magnetic, everyone was brought together by this truly amazing Canadian icon band. This was one experience I will never forget,” Melissa Martin recounted.

For Rodney Wilson, like Melissa Martin, this was also his first (and last) Tragically Hip concert. He found Gord Downie’s performance inspiring and courageous.

“This was my first Tragically Hip concert; they’re a band I’ve wanted to see live for so many years. The atmosphere was beyond anything I could have ever expected and it gave me chills throughout the show. Scotiabank Place is typically a quiet arena but the emotion and energy in the building on this night was unlike anything I’ve ever experienced at a concert before. Gord gave it his all for more than two hours, performing 25 songs which included two encores. It was inspiring to see the energy and courage he showed on stage during his performance, given the sad circumstances. It was an honour to be a part of a historical night in Ottawa as proud Canadians gathered to say farewell to a Canadian icon,” Rodney Wilson observed.

Local radio personality Jimmy Kalaitzis was happy that the Tragically Hip played a good cross section of their catalogue in Ottawa. A personal highlight for him was when they played the song “Courage”.

“What can I say that hasn’t already been said about the Tragically Hip? For starters the show in Ottawa was exceptionally special. The band played a great cross section of their catalogue. On the ride to the show, my friend Nick mentioned that his favourite song was ‘Boots or hearts’. Nick was lucky because that’s what they started off with. It was bliss by the second song in. ‘Blow at High Dough’ was the second song they played and the CTC exploded! Picture twenty-thousand people singing along, all in unison! The highlight for me was of course ‘Courage’, but the topper was ‘Wheat Kings’ which the band rarely does. It’s hard to believe that, that may have been my last Tragically Hip show,” Jimmy Kalaitzis disclosed.

Music promoter Sheila Dennison feels fortunate to have been in attendance for one of the Tragically Hip’s last concerts ever. Not everyone could get tickets for this concert and emotional experience.

“I was one of the fortunate few to be able to attend one of the Hip’s last concerts ever. They crushed two full hours at the Canadian Tire Centre in Ottawa, and there wasn’t a dry eye in the sold out arena. Reading articles about the Hip in the last few weeks, leading up to the show has changed my views on the Canadian music biz entirely and what it truly means to be a part of it. They are a perfect example of a genuine, hard working band that started from the ground up. They remain as humble and compassionate as they did when they first started playing in the 80s. You can stay true to your roots and still be a major success. People remember that,” Sheila Dennison stated.

Adam Berretta remembers attending his first Tragically Hip concert 21 years ago. Over the span of two decades he saw the Tragically Hip about thirty times. Adam picked up a guitar for the first time, because he wanted to learn how to play Tragically Hip songs. He expresses his gratitude and love for the band he saw for one final time Thursday night.

“My first Hip show was ‘Roadside Attraction’ in ’95. Since then, I have probably seen somewhere between 30 some odd shows, from open fields, to hockey arenas, to small theatres and smaller clubs. All of these shows were stunning things to behold, inspirational celebrations of music that could light a psychic fire in your brain. I started playing guitar because I wanted to play hip songs; the unbridled joy and catharsis that the band and their music has brought me and countless others is immeasurable,” said Adam Berretta.

Despite attending approximately 30 Hip concerts over the years, he noted that there was something very different about their show in Ottawa on Thursday.

“But there was something clearly different about Ottawa on August the 18th. It could very well be the last time we have a chance to see them. The arena was buzzing with electric energy, the atmosphere a strange mix of elation, gratitude, celebration and sadness, with 21,000 people just pouring their hearts out to a band they love. There were triumphant moments, a clenched fist upraised for the “armed with will and determination, and grace, too” line elicited a roar of support that raised gooseflesh, as did the breakdown of courage and frankly, I’ve never heard an Ottawa concert crowd roar louder than they did during ‘Ahead by a Century’. There were tears; seeing Gord check the lyrics from a prompter from my vantage point was like a punch to the stomach. Pointing to his head whilst singing so hard done by, it was difficult to not shed tears, and when he followed suit during the “Only A Fool Would Complain” line from nautical disaster my tears were flowing. The man may look like a million bucks onstage, but it is clearly difficult and challenging for all of them to be doing this, and what a tremendous gift to all of us. I can’t really properly articulate words to the emotions running through me when Gord was left alone onstage. It was 21,000 strong trying to express as much love as they could, as if to will away the inevitable with collective force of love and admiration. This was magic, as it always has been, but with a little something extra in the mix. No one that was there, O believe, will ever forget that singular experience,” Adam Berretta added.

“Truthfully, none of us know if this is the end, but if it is, Gord, Paul, Rob, Johnny and Mr. Downie have shown all of us how to fly in the face of the worst kind of adversity with will, determination, and grace, too. I’m so grateful to the band, and their families for sharing so much of the people they love with us for so many years. So much love,” Adam Berretta concluded.

Tonight (Saturday August 20th) the Tragically Hip play their final concert in their hometown of Kingston Ontario. The concert is being broadcasted on CBC and being aired at different local bars, restaurants, and venues across Cornwall and across the nation.