Interview with The Small Glories Cara Luft and JD Edwards 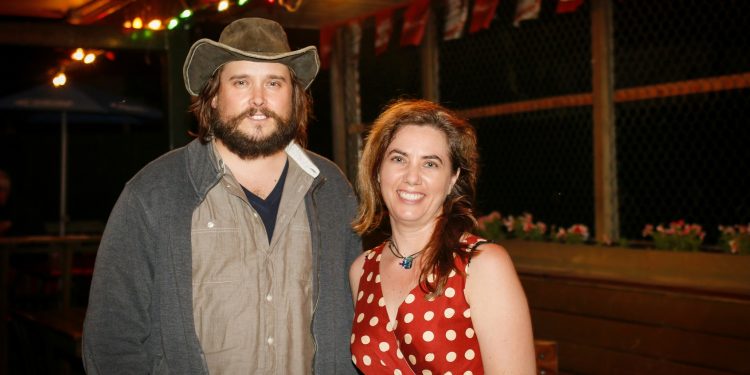 Morrisburg Ontario – The St. Lawrence Acoustic Stage will be resonating with the beautiful folk sounds of The Small Glories on October 8th. The musical duo, which consists of Cara Luft and JD Edwards, originates from Winnipeg, Manitoba.

“I had the privilege of working with Neil on one of my solo albums (The Light Fantastic) and was honoured that he was interested in working with JD and myself on our debut album. Having someone like Neil on board was a treat, he’s one of those artists/producers who cares so much about serving the song, of connecting with it and presenting it in the best way possible. He cares about lyrics and vibe, about performance. He’s not a perfectionist, but rather more concerned about being “sold” on how we sang the line or played the guitar part. Did we sing it with passion? Did we play with gusto? Did we serve the song? We brought songs we had written with others, songs we had written individually, and some that we had co-written. All of them seemed to revolve around the theme of home, of belonging. We’re proud of all the songs on the album, but one that stands out for me is “Holding On”, particularly because Neil had me re-visit the song and pretty much change the arrangement completely, in order to tap into what the song is about. It’s a beautiful arrangement,” said Cara Luft.

The album, which was recorded in a very scenic and picturesque part of British Columbia, includes some very talented guest musicians on the tracks.

“We had an amazing time during pre-production and recording of this album with Neil Osborne. The Bottega Studio is in the hills just outside of Kelowna, BC on an alpaca farm surrounded by huge pine trees and horse farms. We spent a couple of weeks together along with guest musicians Mark Mariash (percussion), Gilles Fournier (bass) crafting and polishing these tracks. We also invited Scott Nygaard (lead acoustic guitar), Andrew McCrorie-Shand (hurdy gurdy & accordion), Jesse Padgett (Scruggs banjo) and Ivonne Hernandez (violin) to lay down tracks on the album. I think all of the songs on this album are great but if I had to pick just one, I think the title track, Wondrous Traveler is one we are most proud of. We took two very old songs, mashed them together into one and then made it new again. It flows and and sounds so good”, JD Edward added.

Cara Luft and JD Edwards work well together, think highly of each other, and that attributes to their success. For example Cara Luft appreciates JD Ewards creativity.

“JD has a huge heart, he’s a guy who feels things incredibly deeply. He’s authentic, genuine, funny and honest. He oozes creativity. I think we make a powerful team, we really play well off each other and encourage each other to be our very best. I feel pretty darn lucky to be singing with him,” Cara Luft explains.

While JD Edwards is fond of the energy Cara Luft brings to the stage for the Small Glories.

“Cara Luft is a unique individual who brings boat loads of energy to the stage and to her music. She is always conscience of her audience and strives to be the best she can be on and off the stage. She carries herself with strength and determination and rarely lets her emotions get the better of her. She is very knowledgeable about folk music and has a love for anything from the 1980’s. She is keen on maintaining & curating old friendships as well as seeking out new ones. The road is her home and her extended family and fans are spread out across the globe which makes touring very interesting. We often have a “safe home” to stay in, but when we don’t she is keen on tenting whenever she can. She also loves to ride her fancy 10-speed bike whenever she has a chance. She has a love/hate relationship with driving. She loves the open road but hates bad drivers. We often joke about starting The Small Glories Course to Better Driving. She also loves to bring her stuffed animals along on all of her adventures, especially her pink monkey friend”, JD Edwards reminisced.

JD Edwards and Cara Luft find inspiration for their music everywhere – from relationships and families and more.

“I find inspiration from my family and friends. My relationships with my wife and son. I’m finding inspiration in everyday things around my city and my home. I’m also finding tons of inspiration from my peers and co-workers. I love hearing what others are writing about and how they fuze their thoughts and ideas with their original music. I’m currently working with a poet from Boston, MA finding music for his poems. It’s fun and challenging for me as a songwriter,” said JD Edwards.

Cara Luft of the Small Glories is also a Juno Award winning musician. She remembers the experience fondly.

“Being awarded a Juno was a pretty beautiful experience. It’s always an honour when your peers celebrate the work you do. I think all three of us weren’t expecting the award, so it made it even more special. The ceremony was in Winnipeg and I think I was the only person who walked to and from the awards show,” said Cara Luft.

For those who are planning to attend the concert in Morrisburg on October 8th, you can expect to see a fabulous performance by two experienced and professional musicians.

“We welcome everyone and anyone who enjoys good music. We love what we do and we make sure you leave with a renewed spirit and joy in your heart. We’ll tell some fun stories and maybe even get you singing,” JD Edwards concluded.

Opening this concert for the Small Glories will be Canadian Folk Music Awards nominee Benjamin Dakota Rogers. He is a multi-instrumentalist, singer songwriter and composer. He combines fiddle and guitar and writes songs borne as much from ancient myths and fables as life experiences.

Tickets for this show with the Small Glories are $20 in advance/$25 at the door, all tickets are general admission. Tickets available at Basket Case in Morrisburg and Rurban Brewing in Cornwall or online.