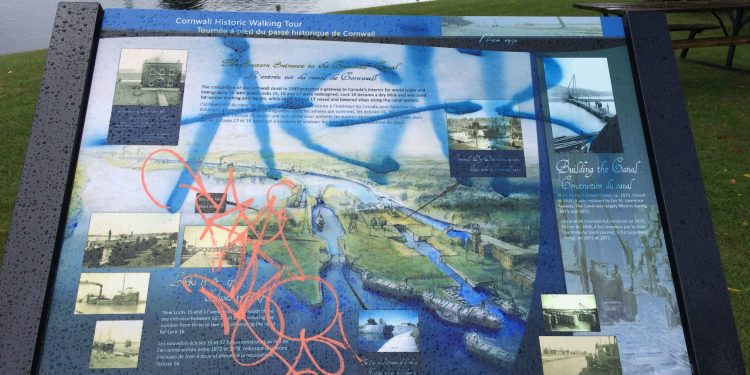 Cornwall Ontario – A popular spot to enjoy the Cornwall Historic Walking Tour was the target of an apparent act of vandalism last Thursday night.

Members of the public, who might have information concerning the incident where a plaque depicting the Eastern Entrance to the Cornwall Canal was spray-painted, are encouraged to contact the Cornwall Community Police Service (613-9335000). The incident took place sometime overnight Thursday, Sept. 22. The good news is the graffiti was quickly removed from the plaque, as well as a nearby garbage receptacle that was also defaced.

“The plaques include a special finish that inhibits the paint’s ability to adhere to the finished product,” said Centretown Coordinator Todd Lihou. “As soon as we found out about the vandalism we quickly washed the paint off.”

Lihou said Cornwall police have been advised of the incident and anyone with information should contact the authorities.

“This is an unfortunate act. So many people, including countless volunteers and stakeholders, worked hard to make this project a reality,” said Lihou. “We hope that by providing this information to the public the police will be able to find out who did this, so that this won’t happen again.”

Nearly 20 Cornwall Historic Walking Tour plaques were unveiled this summer featuring colourful illustrations that depicts an era or event from Cornwall’s rich history. The project was sponsored by Heart of the City, the City of Cornwall, Le Village BIA and the Downtown BIA.