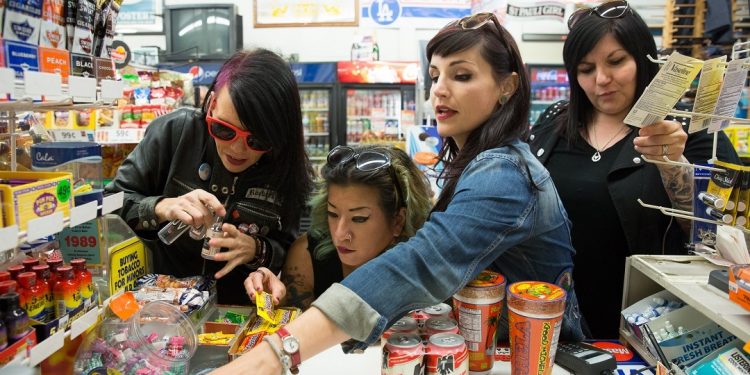 Ottawa Ontario – Bad Cop/Bad Cop and The Interrupters, who are touring North America together, are both making a stop in Ottawa to play Ska-lloween at the House of TARG on October 27th.

Bad Cop/Bad Cop are a SoCal punk band that consists of vocalist and guitarist Stacey Dee, bassist and vocalist Linh Le, vocalist and guitarist Jennie Cotterill, and drummer Myra Gallarza. The band signed to Fat Wreck Chords in 2014, and they released their first full length album titled ‘Not Sorry’ in June of this year.

The songs on the new album are autobiographical to some extent.

“Each song paints a picture about all of our lives and perspectives on things. The whole album is filled with ‘Lifetime Original Movies’,” Stacey Dee reflected.

Bad Cop/Bad Cop, who just released a video and who have a busy tour schedule, are already thinking ahead to their next album and their next tour.

“We just released a video for our song off of ‘Not Sorry’, called, “Sugarcane” and we are on tour with the Interrupters until the end of November. When we get home from tour we are jumping right into the studio to record our next full length record to be released on Fat Wreck Chords by June, 2017. We are in talks about tours for 2017 now and are already booking Europe for the 2017 festival season,” stated Stacey Dee.

Nofx fans might recognize Stacey Dee’s vocals off the 2015 release ‘Home Street Home’ – The album is a soundtrack for a musical written by Fat Mike. Stacey sang the part of Sue, the main protagonist in the story. Her vocals could be heard throughout the album. She was the lead vocalist for the opening song “Monsters”, and her vocals could be heard backing up Fat Mike’s on the final song “The Agony of Victory”.

Stacey learned a lot about lyrical timing by working closely with Fat Mike. What she learned from the veteran punk rocker has translated into better song writing for the band Bad Cop/Bad Cop.

“Working with (Fat) Mike was an experience of a lifetime and one great personal accomplishment. It wasn’t easy. It was tough both emotionally and physically to play the role of Sue. I learned so much from Mike about lyric writing and how to use timing to fit in exactly what you want to say, which is the art of Fat Mike’s lyrical styling. I would be a liar if I said that I didn’t pick up on that a bit when writing my own songs now,” noted Stacey Dee.

Bad Cop/Bad Cop are already a critically acclaimed band. Their first EP titled ‘Boss Lady’ generated positive buzz and reviews. They were listed on the Alternative Press ‘100 bands you need to know about in 2015’ – The band feels honoured to receive such an accolade.

“An honour. It was an honour! We’ve all been doing this a long time. It was overly rad to be considered something worth while to pay attention to,” said Stacey Dee.

Punk rock has had a renaissance and revival in 2016. That is demonstrated by the numerous releases on Fat Wreck Chords this past year including new albums by Bad Cop/Bad Cop, Chixdiggit, Face to Face, toyGuitar, Useless ID, and more. The label also released a new Nofx album that features powerful female vocals in the final track titled “Generation Z”.

This song features the voices of the next generation, including both of Fat Mike’s daughters as well as Tony Sly’s daughter. Stacey Dee was impressed by the haunting, intense, and harmonious vocals by the three young singers.

“I think it’s a brilliant song! I got to hear it before the record came out and was beside myself. I mean the lyrics are incredible but the melody is what gets me. Both of Mike’s daughters as well as Tony Sly’s daughter were featured on the song. Hearing the girls sing at the end is haunting. Mike got the girls to sing with an intensity that matches the outcome of the scenario. I was super impressed with Darla’s ability to harmonize with herself so well being so young. I heard she picked her own harmonies as well! Killer! She is supremely talented. It’s a real gift to watch what she’s gonna do in her life! The young lady reciting the poem at the end of the song is Mike’s 17 year old daughter. I think she delivered it in a very direct, mature and mater-of-fact way. I’m proud of all of them for such an outstanding job!” Stacey Dee confided.

Bad Cop/Bad Cop, who put on an energetic and entertaining show, could very well be inspiring the next generation of female musicians to follow in their footsteps. The genre of punk music would certainly benefit from more talented women artists.

Stacey Dee notes which women musicians and artists inspired her growing up, including Kathleen Hanna who was the lead singer of quintessential bands like Bikini Kill and Le Tigre. She is a fan of women who are not afraid to brazenly express themselves.

“I was a huge fan of Cindy Lauper, Madonna, The GoGo’s, Joan Jett, Pat Benetar, Dolly Parton and shit like that. I love Kathleen (Hanna) and everything she is about. We just met her at Riot Fest in Chicago this year. That was a highlight for sure. I got to thank her for all she’s done and helping over the road for women like us. I’m a fan of all women who are not afraid to brazenly express themselves the way they need to in their lives!” said Stacey Dee who fits the mould as one of those women musicians who brazenly expresses herself.

Canadian audiences will be able to see Bad Cop/Bad Cop for the first time live. This is the bands first tour in the Great White North.

“This is our first time in Canada! I’ve been wanting to tour through Canada most of my adult life. I handle all of the mail orders for our band’s merch, and I ship stuff to Canada, so I know we have fans there. I think Canada has some of the coolest people, they are super funny and easy going! It’s bizarre to go to another country where everyone looks and talks like American’s but aren’t at all.

Touring with Bad Cop/Bad Cop are Los Angeles ska band the Interrupters who are on Hellcat Records (an off shoot of Epitaph Records). The band is promoting their sophomore album ‘Say It Out Loud’ which also came out in June. The album was produced by Rancid’s Tim Armstrong.

The concert on Thursday, October 27th, 2016 is all ages and licensed. Tickets are $15 in advance and are available at Vertigo Records and online at Spectrasonic. The doors for the show are at 8:30pm. House of TARG is located at 1077 Bank Street in Ottawa Ontario. The show is being presented by Voice of the People, Spectrasonic and punkottawa.com.