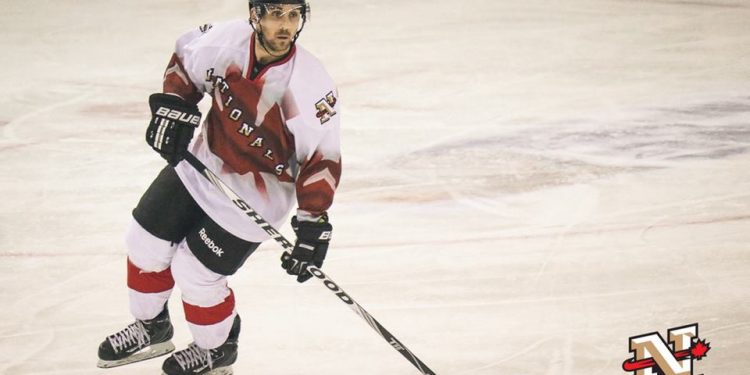 Cornwall Ontario – Jeff Legue’s skates have taken him across the Atlantic ocean and back home again. After nine years of playing professional hockey in the UK, the former Cornwall Colt is back in his hometown of Cornwall Ontario. Jeff Legue is coaching for the Ontario Hockey Academy and he is also lacing up to play with the Cornwall Nationals of the FHL.

His hockey career took off in 2000-2001 when he lead the Cornwall Colts in scoring with 127 points in 55 games. He was awarded the CJHL Most Valuable Player as league MVP. His fondest memory of playing Junior A wasn’t any individual accomplishment, but instead a team accomplishment of winning back to back championships.

After a successful run in Junior A, Jeff Legue played NCAA Division I Men’s Hockey at Ferris State for four seasons. He averaged about a point a game and had a highlight season in 2002-2003 scoring 59 points in 42 games and being named to the NCAA (CCHA) Second All-Star Team.

Balancing academics and athletics is challenging, but that is exactly what Jeff Legue did. He balanced a demanding hockey schedule while pursuing a degree in Criminal Justice.

“When I arrived at Ferris State I studied Small Business, but the following year I decided to switch to Criminal Justice. I’ve always wanted to help in the community whether it be as a police officer or with probation. When it came to balancing my academics it was fairly simple, we had to take classes from 8am to 12pm. Then from 1pm to 5pm we had our ice sessions and workouts, and one or sometimes two night classes a week from 6pm to 9pm. This left very little time for extracurricular activity  but if you wanted to play hockey – school had to come first. We had most Sundays off so that was the day you buckled down and got most of your stuff done for the upcoming week so that you weren’t up to late during the week,” Jeff Legue recounted.

After University Jeff Legue played one season in the ECHL (a mid-level professional ice hockey league that is one tier below the AHL), and followed by one season playing professional hockey in Germany.

Jeff Legue would call the Sheffield Steelers of the EIHL (a professional men’s hockey league based out of the UK) home for the next nine seasons. He played over 500 games with the Steelers, he is the team’s all-time goal and point leader, and in 2011-2012 he was named to the EIHL All-Star Second Team.

However, just like with the Colts, he considers team accomplishments like winning league titles and playoff championships far more important than his individual accomplishments.

“The records that I hold in Sheffield mean a lot to me personally, but the things that mean the most to me are the league titles and playoff championships that were won in the time I was there,” said Jeff Legue.

The Sheffield Steelers were EIHL Champions four times, and also EIHL Playoff Champions on three different occasions during his tenure with the team. Despite winning back to back EIHL Champions in the 2014-2015 and 2015-2016 seasons, Jeff Legue knew it was time to come home.

“When we decided to move back to Cornwall it was because I had been gone long enough. Christmases and Thanksgivings are some of the things that I’ve been looking forward to for a long time with the family. I have always missed Cornwall. I have a lot of great memories here and we’re back to make many more,” said Jeff Legue.

After 15 hockey seasons away from Cornwall, Jeff Legue was looking forward to playing for a home team again. He signed with the River Kings this summer, however much to his surprise the team folded before the start of the season.

“When I first heard of the River Kings folding I laughed it off because we had signed a bunch of players and it we were going to have a great team on paper. Then the final statement came out that they were folding – and it made me realize that the skates are back on the shelf again,” said Jeff Legue.

Thankfully Jeff Legue’s journey back to Cornwall did not end there. After a campaign to save the River Kings fell short, Mitch Gagne and Rodney Rivette brought the FHL to Cornwall Ontario and started the Cornwall Nationals franchise. It didn’t take them long to sign Jeff Legue.

“Well there is a saying as one door closes another opens. When I was approached about playing for the Nationals it gave me an opportunity to finish my hockey career where it all began. It also gives most of my family a chance to see me play because most of my career was overseas. I hope Cornwall fans that use to come to Colts games can remember the little guy that worked hard every night. I’m still the same guy, I can just can grow a little bit of a beard now. The fans in Cornwall have always been great supporters and continue to be there for our local hockey teams,” Jeff Legue added with a smile.

Jeff Legue suited up last Saturday and played an exhibition game for the Cornwall Nationals at the Civic Complex. Despite the OT loss, Jeff Legue did manage to light the lamp with an impressive top corner wrist shot in the third period, and he gave the crowd something to be very excited about. He was named the game’s second star.

In addition to playing with the Cornwall Nationals, Jeff Legue is also an employee at the Ontario Hockey Academy. In 2014-2015 Jeff Legue had the experience of being a player assistant coach for the Sheffield Steelers. He is now bringing that experience to the local hockey school.

Jeff Legue is an assistant coach for the U17 Boys at the Ontario Hockey Academy. His experience playing Jr. A, NCAA, ECHL, and playing professional men’s hockey internationally, makes him a perfect role model for the program. His experience and knowledge of the game will benefit the students.

Working with young players gives Jeff Legue a feeling of nostalgia. It brings him back to a time when he was still learning the game of hockey.

“When I started out coaching I didn’t know what to expect, all I know is that I have a different perspective on the game and the age that I’m coaching. It brings back good memories and I hope that the knowledge and experiences that I have learnt throughout my career I can pass on to these young men to help get them to the next level,” said Jeff Legue.

The Cornwall Nationals inaugural home opener is Sunday, October 30th at 1 p.m. vs. the Danville Dashers. Jeff Legue will be missing the home opener because of coaching commitments with OHA, but fans can expect to see him in action again very soon.