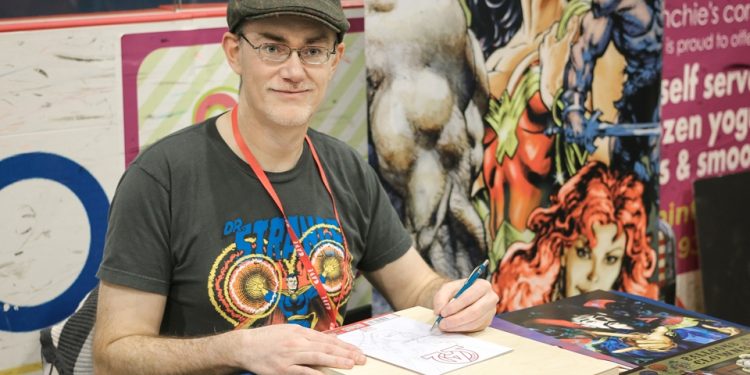 Cornwall Ontario – Geof Isherwood, whose name will appear in the credits of the upcoming Marvel movie release Doctor Strange, will be visiting Cornwall next week.

Comic book artist, film concept illustrator, and storyboard artist Geof Isherwood will be at Fantasy Realm on Saturday November 5th from 10am to 5pm to meet comic fans.

Geof Isherwood has done work for both Marvel and DC Comics including such titles as Doctor Strange, the Silver Surfer, Conan the Barbarian, Daredevil, Suicide Squad, and more. He has also been a penciller and inker for such titles as The Astonishing Spider-Man, the Fantasic Four: Atlantis Rising, Thor, and X-Men.

His movie credits include the 2016 X-Men: Apocalypse and the 2009 horror-thriller Orphan. Now he can add Doctor Strange, a comic he first started work on twenty-five years ago, to his credits. He was given special thanks in the movie credits, and he got to see it first hand at the official World Premiere.

Geof Isherwood was a special guest at the Red Carpet World Premiere of Marvel’s Doctor Strange in Hollywood California on October 20th. He recounts his experience and meeting Benedict Cumberbatch afterwards.

“I received a surprise email invitation from Marvel to the world premiere of the movie on October 20th. So, my wife Amanda and I decided we could not miss this opportunity, and flew out to L.A. and Hollywood. It was fascinating to observe the entire red carpet event live, and from the inside,” said Geof Isherwood.

Geof Isherwood was impressed with the movie and Benedict Cumberbatch’s performance as Doctor Strange – he thought the film, the visual effects, and acting were excellent, inventive, and awe-inspiring.

“The movie itself was excellent. No spoilers, but I can say that while the visuals were so inventive and awe-inspiring, Benedict Cumberbatch’s performance of Doc was so human that he grounded the story in reality, and that made it work. Also, there is enough humour sprinkled in that adds nervous relief, and in places you would never expect. This was one movie that grows on you in retrospect, and, to me, provides a crossover for moviegoers do are not normally Marvel fans, yet has enough specific references to Dr. Strange lore that us longtime fans (and artists) are left slavering for more. What these movies can show the public is how much imagination went into these characters in the comics that so many have dismissed over the years as juvenile nonsense. Folks can see what attracted us as readers when we were kids,” Geof Isherwood disclosed.

“To top things off, Amanda and I were invited to an after-party at the Magic Castle, a private club for magicians. There, we had the rare chance to meet and speak for a few minutes with Mr. Cumberbatch himself, a thoroughly charming and gracious man,” Geof Isherwood recounted.

Twenty-five years ago, when Geof Isherwood first drew Doctor Strange, he never imagined his journey would have led to a world premiere invitation to a blockbuster movie.

“It is still remarkable to me that drawing the comic 25 years ago would have led to this invitation. It just provides more impetus for me to do better work and to show my students at Algonquin what special times lay ahead for them,” stated Geof Isherwood who teaches in the Illustration and Concept Art Program at Algonquin College in Ottawa.

Doctor Strange can be viewed in theatres, including Galaxy Cinemas in Cornwall Ontario, starting on Thursday, November 3rd, 2016.

This is not the first movie where Geof Isherwood’s name appears in the credits.

Earlier this year Geof Isherwood’s name could be spotted in the credits of the the X-Men: Apocalypse movie as a conceptual artist. He had previously worked on X-Men: Days of Future Past.

“After moving to Ottawa, it took the Property Master Claire Alary some time to find me. I knew her from way back on Battlefield Earth, my first minus job. So, 15 years later, I get an email from her. When we met it was as if no time had passed between. That’s how it is in movies. It’s like when you see family after many years: the time apart doesn’t matter and you pick up where you left off. At first, I was asked to design staffs, decoration and such that are in the ancient Egyptian scene at the beginning. After that I spent quite a bit of time. A couple of weeks, working on weapons for Pestilence and then the katana for Psylocke. I cooked up an elaborate pattern on it. We were hoping she could use her psionic power to charge it up and display the pattern, but she wound up getting little screen time and that visual wasn’t able to be used,” said Geof Isherwood.

“I met with the director Jaume Collet-Serra. We met at a hotel lobby in Montreal to go over the scenes he wanted drawn. The usual situation. We then went to the set of the house. It was designed with lots of openings in the wall, odd windows and such, so they could put the camera in places you normally could not. So, it looked like a normal house at first glance, but really wasn’t. Very clever design. As for the action, as I recall, Jaume had a good idea of what he wanted but asked for my input if I saw something useful,” said Geof Isherwood.

For Geof Isherwood his career all began as a teenager who loved comics. He practiced and learned how to draw comics, he submitted his work, and then he got his first break at DC Comics – the home of Superman and Batman.

“I decided young I could make a living at drawing in comic books. It helped I enjoyed reading them so much. So, I copied my favorite artists, learned how they drew specifics of faces, poses and so on. I had the chance to go to the Marvel offices and got encouragement from a couple of artists there. I was 16. I continued to submit work, following their suggestions, and five years later I was assigned a short horror story. Then, a submissions to DC got me a short horror western story. These did not get me anything more, so in the spring of 1983 I went to New York to stay until I could get something more substantial. I didn’t take long before I was given a Daredevil fill-in and from there on I would be assigned one story after the next and within the year I had my first series, Swords of The Swashbucklers. Working with a few editors I drew a variety of titles: Conan The King, Conan The Barbarian, The ‘Nam, Suicide Squad for DC, Dr. Strange, Namor and many individual stories on Spider-Man, Thor and Avengers to name a few,” noted Geof Isherwood.

It’s hard for any artist to pick his favourite work, but for Geof Isherwood, Conan and Doctor Strange both stand-out.

“It’s difficult to name a favorite, because every character I drew had to be real and interesting to me or readers would not enjoy the stories. However, Conan always stood out, and Dr. Strange as a modern hero. I could always see Conan as a real person and Dr. Strange’s universe promised great visuals because of his dealings with cosmic sorcery,” Geof Isherwood reflected.

Geof Isherwood has pretty much done it all, except for meeting Stan Lee.

“No, I have not worked with, or even met, Stan Lee. Not yet. Perhaps soon it will happen,” said Geof Isherwood optimistically.

Earlier this year Cornwall comic fans got the chance to meet Geof Isherwood. He was a guest at the Second Annual Cornwall and Area Pop Event.

“I have enjoyed the terrific costumes many fans put together and am always humbled by fans enjoyment of my work, especially when I hear a story or cover I drew that is their favorite. Seeing the fans’ enjoyment is special,” said Geof Isherwood.

He also visited Fantasy Realm earlier in the summer, the same day as Foodfest and CoTiCon, to meet fans.

For those who would like to meet Geof Isherwood in person, they can do so on November 5th.