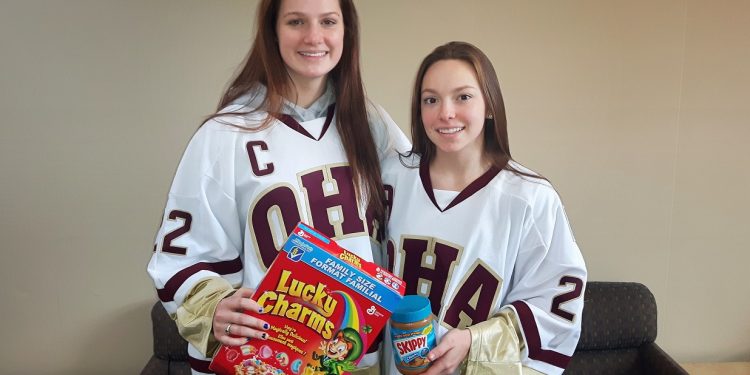 Students from the Ontario Hockey Academy, including Emilie Harley and Emma Martel pictured here, will be collecting food for the Agape Food Bank this Halloween.

This is the sixth consecutive year OHA has been going door to door for the local food bank.

Teams will be visiting several different neighbourhoods including Riverdale, Center-town, around Home Depot, Sunrise Acres (and nearby areas), and around Vincent Massey.

Student Athletes engaged in this food collecting activity will have the opportunity to volunteer and learn more about civic responsibility.

“It’s for a good cause, and it is the least we can do,” says Emma Martel who is a member of the Social Committee at the Ontario Hockey Academy.

“The Agapè Centre is thankful to the OHA and students for getting involved in making a difference in the community. It’s extremely inspiring to see the students taking such an active role in the fight against hunger!” stated Executive Director Diane Plourde.

Students and staff at the Ontario Hockey Academy are happy to be contributing to such an important cause – collecting food for the Agape.

“The Agape Centre plays such an important role in providing support in the Cornwall community. We are truly happy that we can play a role in ensuring the center is able to continue to meet our city’s needs”, says Principal Jesse Ferguson.

“The Ontario Hockey Academy is pleased to go door to door this Halloween to collect food for such an important charity in our community,” Ferguson added.