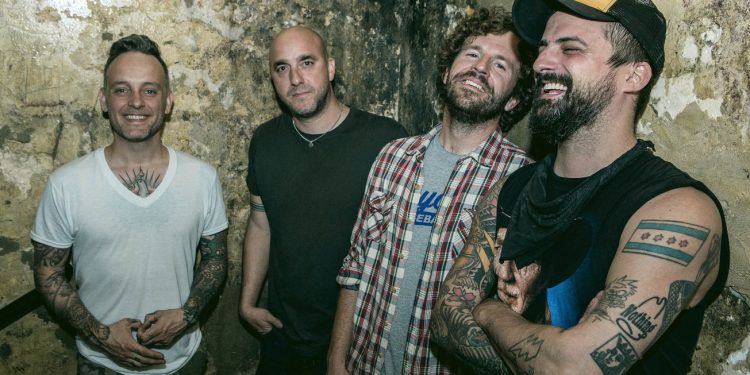 Ottawa Ontario – Punk rock super group The Falcon play November 17th at Zaphods in Ottawa as a part of their Canadian tour.

Guitarist Todd Mohney (Rise Against) was also in the band for a brief period of time and recorded on the bands 2004 album. It’s worth noting Todd Mohney’s early contributions to The Falcon since he is what inspired the bands formation.

“The Falcon was inspired by Todd Mohney, formerly of Rise Against, who’s just an amazing guitarist and performer. My band the Lawrence Arms was on tour with Rise Against and he had such a reckless awesome style that I wanted to start a band that had a bombastic name and sound. The Falcon was born. Dan and I grew up together and Neil is in the Lawrence Arms, so they came aboard immediately. Dave came about after Todd was long gone and we reformed to play the Red Scare 10 year show.

Todd was in the band for a very brief period, then he moved away and I haven’t seen him since. Last I heard he does mega-distance bike racing now. Great guy, great player, and I’d love, love, love to see him again”, guitarist and vocalist Brendan Kelly reminisced.

Mohney is not the only connection The Falcon has with Rise Against.

Neil Hennessy, who currently plays in The Falcon and The Lawrence Arms, also played rhythm guitar in the summer of 2015 for Rise Against as a part of their European tour. In addition he co-wrote the Rise Against song “Swing Life Away”, and he is also credited for doing percussion on a Less Than Jake album.

About a year ago Dave Hause (who is in The Loved Ones and Painted Black) joined the Falcons. Hause has been an excellent addition for the band, and his professionalism juxtaposes well with Kelly’s lawless approach to music writing.

“Well, Dave is a spectacular performer and a great singer and a ripper on the guitar. He’s so so good. He and I had never worked together before but I think that our different ideas really lent each other to a unique cool spot. I’m really into fuzz and biffed strings and happy accidents and reckless mood type stuff, and Dave is a consummate pro. The meeting of minds brought us to a place on “Gather Up The Chaps” that I don’t think either of us could have gotten to on our own.

Earlier this year, The Falcon released its second album, “Gather Up The Chaps, on Red Scare Industries”. It was recorded at Atlas Studios in Chicago, a very familiar spot for Brendan Kelly.

“The record is conceptually about kind of dark, dick swinging id. There’s a lot of self loathing and self destruction baked into those songs. Lots of drinking, lots of drugs, stuff of that nature. We recorded it in Atlas Studios in Chicago, where the Lawrence Arms records all our records, and it was overall pretty standard in terms of laying stuff down”, said Brendan Kelly.

What is Kelly’s favourite song off the new album? A song entitled “Dead Rose” which demonstrates his growth as a songwriter.

“I really like the song “Dead Rose” because it’s really a departure for me as a songwriter and I feel like it turned out way better than I imagined it would”, Brendan Kelly added.

The Falcon mixes humour with many of it’s songs – and according to Kelly humour adds self awarness.

“Humour is the key to great art. Things don’t have to be “funny” to have a sense of humor. Humour adds self awareness. That’s why Minor Threat’s lyrics hold up better than Gorilla Biscuits’ lyrics. Nobody would ever say Minor Threat was a funny band, but they had a sense of humor that makes Gorilla Biscuits look a little self important and dour by comparison. Just to be clear, I love Gorilla Biscuits. No disrespect intended there. The Falcon is definitely influenced by lots of bands, not just funny ones. We love the rock,” Brendan Kelly concluded.

Opening the show for The Falcon is comedian Kyle Kinane.

Kinane’s first television appearance was on The Nanny playing “Young Roger Clinton”. Kinane has performed his stand-up on television programs Last Call with Carson Daly, Live at Gotham, Conan, and The Tonight Show Starring Jimmy Fallon. He has opened for comedians Patton Oswalt and Daniel Tosh on tour.

The show is being promoted by spectrasonic.com.