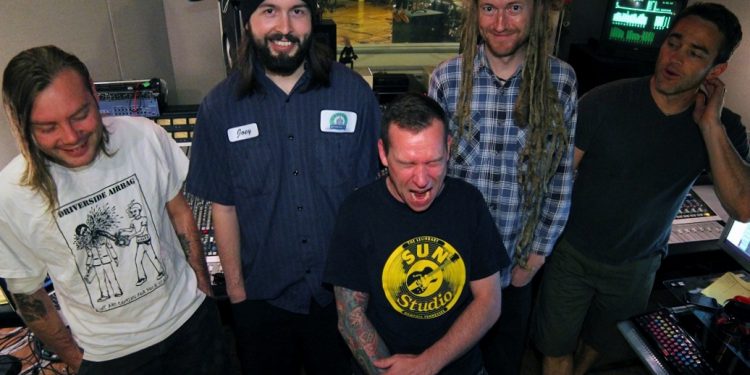 “Our best-of album “We Lived Like Kings… We Did Anything We Wanted” of course, probably because most of our albums have a bunch of seafood extender-like filler tracks, and the best-of cuts out all that fat and just gets straight to the hits. All the hits. Nothing but the hits,” Lindsay McDougall confided.

The title and artwork of their new album “We Lived Like Kings” is inspired from an Australian true-crime TV mini series from the 1990s.

“The title and artwork are from “Blue Murder”, an Australian true-crime TV mini series in the 90s, about a corrupt NSW policeman Detective Sergeant Roger Rogerson, and the criminal he loved, Arthur “Neddy” Smith,” Lindsay McDougall divulged.

The title of the new Frenzal Rhomb album is based on a line said by the character of Roger Rogerson in the series “Blue Murder”. It is based on the true story of a New South Wales Police Force detective-sergeant who was implicated, but not convicted, of crimes including murder. However in June 2016 he was convicted of a murder and sentenced to life in prison.

“There’s a scene in the series, towards the end, when they’re holed up in a dank and filthy safehouse, hiding from the police who will eventually take them down. They’ve made millions of dollars, broken hundreds of laws, tried to kill each other numerous times, and they’re reduced to hiding in a piss-stained house in the outer suburbs, waiting to be arrested. That’s when Roger Rogerson says the line “We lived like kings… we did anything we wanted”. I think it’s clear to see in the synchronicity between their lives and ours which will explain why we chose that title,” Lindsay McDougall added.

The name Frenzal Rhomb is Australian for not being smart enough to know when to quit. After 25 years, and numerous injuries and health scares later, the band name is more profound and meaningful.

For example Jason Whalley had brain surgery to remove a pig worm. Also, there was nothing humorous about drummer Gordy Forman snapping his humerus in half like a drumstick. Furthermore, guitarist Lindsay McDougall had a detached retina after bumping his head. The years have left their marks on the band. Frenzal Rhomb continue to tour despite the many injuries and the adversity they have faced.

“To everyone, even our own physical bodies’ disdain, I’m afraid so. Even as our organs are shutting down. Our singer Jason has traveled quite a lot around the world, which is why he has time to pick up things like botfly larvae under the skin on his head, and an actual pig-borne tapeworm living in his brain. Or our limbs spontaneously breaking in desperate attempt to escape the embarrassment, our stubborn brains, like birds smashing their heads against a closed window, still (we) refuse to get a haircut and get a real job,” Lindsay McDougall mentioned.

“As for our injuries, we’re just old, dumb, and unlucky. I’m just a clumsy fool so I bumped my head and detached my retina last year. Gordy is a clutz who after crowd surfing in Perth fell down between the stage barrier and the stage and broke his arm in half. So that was fun,” Lindsay McDougall added.

One especially brutal injury happened here in Canada at a gig in Calgary Alberta when singer Jason Whalley put his arm through the plywood floor of the stage.

“Last time we were in Calgary (on the Chixdiggit tour) Jason stage dived and on the way back his arm fell into a hole on the stage, bending it 90 degrees back the wrong way. It wasn’t pretty, but the bar manager did give me and Gordy free booze for the rest of the night so we wouldn’t sue the place. So I guess it turned out okay. Jason still doesn’t have 100% feeling in his fingers, but we got free booze,” Lindsay McDougall recalled.

Frenzal Rhomb’s favourite place to play is Australia, but they have enjoyed touring Canada, including a 1999 tour of the country with Chixdiggit.

“Australia is our favourite country to play, which is why we very rarely play anywhere else. Or maybe it’s because we’re broke and lazy. Canada is bloody amazing (of course we were going to say that). Back in 1999 we toured with Chixdiggit all the way out to Glace Bay and Halifax in Nova Scotia. Most North American bands don’t even get to do that. It was pretty damn beautiful. Although the roads were long, and Chixdiggit recycled their piss-bottles. Even gave them names. This is actually is bringing up a lot of bad memories for me so I’m going to stop. Anyway, I’m sure we’ll be back soon,” teased Lindsay McDougall.

“Tell KJ and his maple leaf-wearing mates to quit harshing our buzz. We got our own beer years ago, the wonderful folk from Young Henrys made it for us,” said Lindsay McDougall.

“We launched it at Good Beer Week 2014. Only problem was it was 10% alcohol, so too strong to drink and still be able to play, and by the time we got off stage our alcoholic audience had finished it all. Apparently it was quite nice,” Lindsay McDougall added.

“We accepted that gig of sound mind and body, so we’ve got no one to blame for ourselves. It was pretty fun too, it was a festival, and NoFX were playing before Chad and his mates. On the side of the stage was a giant stack of fake Mesa Boogie amp cabinets, to make Nickelback’s set look decidedly Nickelrock. Well, I decided that NoFX needed those fake amps more, so I pushed them out onstage behind their keyboard player. Nickelback’s techs (Nickeltechs?) didn’t like it that much and angrily pushed them back. They also didn’t like it when I did it again about 20 minutes later, although the crowd disagreed. I was glad that NoFX have quite a scary looking stage crew to stop me being Nickelbeaten up,” Lindsay McDougall responded.

In addition to touring around the world, Frenzal Rhomb has also supported Australian tours by The Offspring, Bad Religion, NoFX, and Blink-182.

Who was their favourite band to tour with?

“Out of that illustrious list, probably NoFX, because Fat Mike puts out our records, and the tours with the other three were so long ago that I can’t remember if they were nice guys or sad pathetic punk pop idiots with bad songs and worse attitudes. Or that could have been us. We also love touring with Australian bands, although they’re more likely to steal our beer. There’s some rad ones like Clowns and The Bennies and Canine and Hostile Objects and I Exist and The Cutaways and heaps more bands that you probably already like more than us,” Lindsay McDougall revealed.

“Canadian bands are okay too I guess, they don’t steal our beer, just our the whole “having our own beer” idea,” Lindsay McDougall added with a smirk.

Fat Mike runs the record label Fat Wreck Chords, and being on that label is a dream come true for McDougall. He is a huge fan of the SoCal punk scene.

“Apart from the obvious of being on the label that I used to dream of being on when I was a kid? (In fact not ever dare dream about, just listen to whatever SoCal nonsense got put in the record shop in Engadine NSW, just because it had a Fat Wreck sticker on it, and loving it.) Apart from that, being on Fat Wreck means that we get to be on the same label as a bunch of our good mates (who play that aforementioned SoCal nonsense), know that all over the world people will buy our records just because of that Fat Wreck sticker, just like I did when I was a kid, and have a label boss who is happy to put out our records, at least in the cast of our upcoming one, without even hearing it. Thanks for that, Mr. Fat Mike Sir,” said Lindsay McDougall.

Both bands, NoFX and Frenzal Rhomb, can sometimes get political.

With the recent election of Donald Trump and with Brexit will punk get more political again?

“Punk is still political, always kind of is, it’s just the bits that float to the top are the lightest, that’s just science. If you dig down you can find heaps of angry people writing great songs about shit things. And not just in the punk rock world either. Hip Hop has never been more political, there are metal bands singing about a lot more than warlocks and swords, and so many younger bands and electronic artists are kind of political because the DIY way they record and release means they don’t need big companies and ruin it with their grubby fingers. Except for Fat Mike’s fingers. We love those fingers,” Lindsay McDougall remarked.

One of Linday McDougall’s favourite Frenzal Rhomb songs is “Knuckleheads” off their last studio album “Smoko At the Pet Food Factory”.

“My favourite Frenzal song is probably Knuckleheads, off our last studio album Smoko At The Pet Food Factory. I love when Jason gets both angry and emotional in his lyric writing, and this song has both, while pointing at a finger at the messed-up sporting culture in Australia where we love our football playing boys so much they seemingly never get prosecuted for (the alleged crimes) they commit. Also it has good riffs,” said Lindsay McDougall.

In addition to a greatest hits album, Frenzel Rhomb also recorded a brand new album at The Blasting room – It is the same studio that recorded the new Face to Face album. Descendents drummer Bill Stevenson and Jason Livermore have had a busy 2016 recording top notch music.

“We just finished it (the new album). We recorded it the same place we recorded our last one, and where so many great records were done, The Blasting Room, with Bill Stevenson from the Descendents, and his partner Jason Livermore (and a cast of several more key players). It was a lot of fun and we think we recorded something really nice. We recorded 23 songs, and we’ll put 19 or 20 on the album, but don’t worry it’ll still only go for about 35 minutes, and that’s only coz there’s a couple of epic 3 minute songs to blow out the average. It should be out in April, on Fat Wreck, even though Mike hasn’t heard it yet. I promise it’s pretty, pretty, pretty good,” Lindsay McDougall concluded.