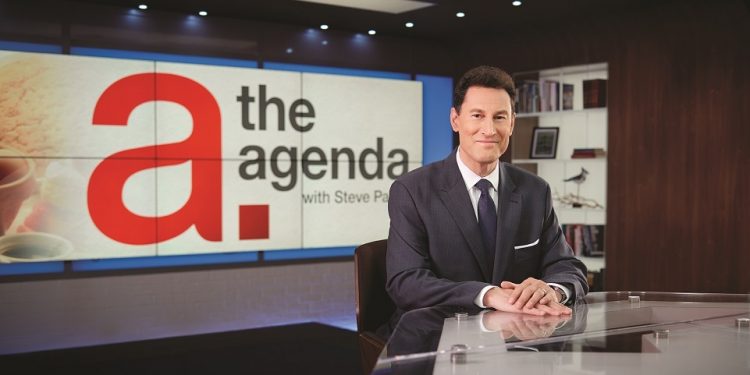 Cornwall Ontario – Journalist, television host, and author Steve Paikin will be visiting Cornwall this weekend. Steve Paikin is the host of TVO’s The Agenda, and he is also a National Post bestseller with his new book “Bill Davis: Nation Builder, and Not So Bland After All”.

He will be at the Nav Centre this Saturday for a political “Fireside Chat” along with author Arthur Milnes. It takes place at the De Havilland banquet room on Saturday, November 12th, 2016. It’s a fundraiser for The Children’s Treatment Centre of Cornwall.

“I’m not so sure how much of a fire-side chat it is going to be. I think that they are going to come and learn something new about both Bill Davis and Wilfrid Laurier. I think Arthur (Milnes) and I are going to make our presentation in an engaging fashion. We are not going to get up there and give two back to back speeches. We are actually going to make it a lot more interactive, both with each other, and with the audience, and I think they’ll have a lot of fun. I think it’s going to be a good fun time filled with a lot of good stories. I’ve never been to Cornwall before, so this visit is long over due, and I’m really looking forward to it,” Paikin stated.

His seventh book, “Bill Davis: Nation Builder, and Not So Bland After All”, came out on October 8th, 2016. The book is rated five stars out of five on the website Amazon.ca. It is available at bookstores like Chapters, Coles, and online.

It’s a biography of former Ontario Conservative Premier Bill Davis. Davis is known and remembered as the Premier who supported Prime Minister Pierre Trudeau’s repatriating the Canadian Constitution and establishing the Charter of Rights and Freedoms. Davis helped Ontario through recessionary economic times, and he is remembered as the father of Ontario’s community college system, TVO, and the OISE.

Steve Paikin choose Bill Davis as his subject because he was a key and important political figure when he was growing up in Ontario.

“I’ve been interested in Mr. Davis’ life story since covering his government in the early 1980s. When I grew up in the province of Ontario from the age of 10 until 24, Bill Davis was the Premier, so he was certainly a significant political figure in my growing up. I also thought nobody wrote a good book about Bill Davis. Certainly he didn’t cooperate with any author in the past to write his life story, so I wanted to do it. I pursued him for about ten years dropping a few gentle hints, and than a few strong hints about why I thought he should do it, and I’m glad he finally said yes,” Paikin explained.

Throughout his research and interviews Steve Paikin learned new things about Bill Davis, but he won’t disclose what he learned. If you want to find out, you will have to read the book yourself.

“That’s all in the book and the answer is (that I learned) a lot. I’ve known him for 30-35 years. I knew a lot about him, but obviously as well there were a lot of things I didn’t know. Through the course of being able to spend time with him, as I did for numerous interviews for the book, I learned a lot more. I’m not going to let that cat out of the bag. If people want to know what they are, they are going to have to read the book”, Paikin commented.

What lessons do you think current Premier Kathleen Wynne could learn from Bill Davis?

“That’s a wonderful question, and I think because the two of them speak relatively frequently, I think she does believe she has something to learn from Mr. Davis’ experiences. To be sure Mr. Davis had kind of a cordial way of dealing with people. He was as tough a competitor as existed, but he also knew when he had a minority government that it was important to involve the opposition, and in some cases, in the minority government, get the opposition on side, or else nothing would have passed. So Mr. Davis had a civility in the way he did his public life, and I think in the main treated people respectfully. So much so, that one of his best friends after leaving politics was the leader of the NDP at the time – Steven Lewis, which is a pretty unusual thing. Those are good principles to live by regardless of what political era you live in, and I suspect the Premier of the day signs on to that as well,” Paikin reflected.

Steve Paikin, whose television program The Agenda airs Monday to Friday at 8pm and 11pm on TVO, has benefited from the experience of writing and researching books. It makes him better at what he does.

“I think doing the book, and doing the research for the book and doing all the interviews I did for the book helped me be a better host for the Agenda. I think the opposite as well. I think it all contributes. Whether it’s doing The Agenda, whether it’s writing books, whether it’s my chancellor duties at the Laurentian University in Sudbury, whether it’s my occasional guest lecturing at Ryerson in Toronto, I think it all contributes. You just learn things in whatever arena you are in. Everything contributes at hopefully making me better at what I do,” Paikin added.

Steve Paikin has earned a reputation for being fair, unbiased, and evenhanded in his editorial coverage and he is well trusted by Canadians. Perhaps it was no surprise that he was selected as the moderator of the 2006, 2008, and 2011 Federal Leaders Debates. He has also moderated three Ontario Provincial Leaders Debates in 2007, 2011, and 2014.

That being said, The Federal Leaders Debates in Canada seem to be more civil and subdued compared to their American Presidential Debate counterparts.

“I will just refer to this year’s debates between Donald Trump and Hillary Clinton. We have not descended in the gratuitous name calling, we have not yet descended into the vicious insults, or the prevaricating that we saw south of the border. I believe there still is, and I hope there will always remain, a basic respect and civility among the leaders who seek either the Premiership or Prime Ministership in Canada. Our debates thankfully didn’t get into the ugly muck with the kind of name calling that we saw (in the US). I hope we never do. I think the moderators down in the South had an extremely difficult job trying to keep control of those situations. I don’t envy them at all. I wouldn’t want to do them myself and I don’t know what I would have done had I found myself in similar circumstances. Particularly when one candidate clearly didn’t seem all that interested in following the basic Robert’s Rules of Civility (Order) for the debates. I wouldn’t know what to do about that,” Paikin mused.

In addition to being an author and television personality, Steve Paikin was also made an Officer of the Order of Canada, and he was also appointed chancellor of Laurentian University in 2013. He is well spoken, intelligent, and thoughtful. His experience and knowledge of Canadian and Ontario politics will making him an engaging speaker.