Interview with Public Animal who play Montreal on November 19th 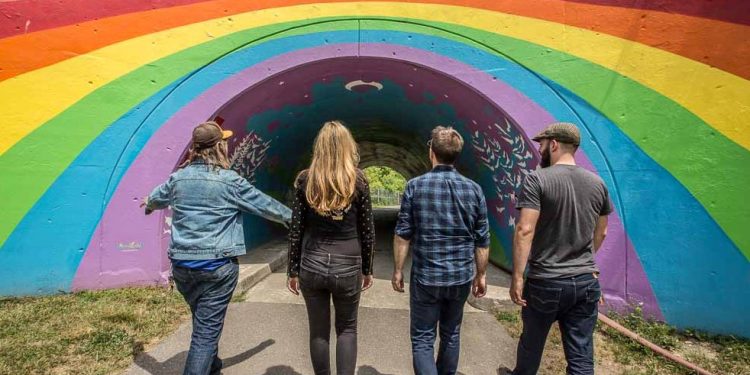 The band name Public Animal is based off the title of an Alice Cooper song.

“We choose that song because ‘Muscle of Love’ was already taken’, said Eric Larock

The hard rock band is hitting the road to promote their new album ‘Palace Arms’. The response for the new album has been very positive.

“So far, so good – it’s handy to have so many friends that are music critics,” Larock replied.

The song off the album that Eric Larock is most proud of is a track titled ’10 Seasons’.

“I’m most proud of 10 Seasons, because it sounds like early 90s-era Metallica,” Larock stated.

The album ‘Palace Arms’ was recorded at the Tragically Hip’s Bathouse Studios outside Kingston in the winter of 2015. It was recorded over four days under the helm of esteemed engineer Nyles Spencer. It was mixed and mastered later.

“It’s a beautiful space (Bathouse Studios), they have great equipment, and an awesome engineer with Nyles Spencer,” said Larock.

While recording at the Tragically Hip’s studio it is hard not to think of the tragedy of Gord Downie’s illness. The lead singer made headlines after his diagnosis of brain cancer and one final farewell tour.

“I think that it’s a sad thing for someone who has brought happiness to so many people to have their life disrupted prematurely by illness. Especially since he is leaving a family behind,” Larock reflected.

The band is on the Yeah Right! record label. It’s a label that has been very supportive of Public Animal since day one.

“Tony Lima, who runs the label, has had our backs since day one & does a great job. He is a huge music fan and Yeah Right! is a total labour of love. He also gives us free tote bags,” Larock replied.

Going on tour has provided the band with both weird and interesting experiences and stories to tell.

“The weirdest was after we finished playing a show in Victoria a couple of years ago, we were told by a friend in the audience that Paul Rudolph (guitar player for The Deviants / Pink Fairies / Hawkwind / Brian Eno / etc) did our live sound. Needless to say, we didn’t recognize him, despite the fact that he has played on some of my all-time favourite albums,” Larock reflected.

“The most interesting was playing in the middle of a crop circle for a Raelian convention on the outskirts of Saskatoon,” Larock added.

The band benefits from exposure through the internet, however it is a double edged sword, because it’s much more difficult for an up and coming band to make a living working in this industry.

“It’s obviously much easier now to record / share your music than it was 20 years ago, but the downside of that is the glut of content that is currently available. Most musicians can’t make any money unless they tour, and touring VISAs are prohibitively expensive. Gas is expensive. Most granting agencies will only fund artists that are already established and successful (in other words low risk). However, I’m told that the cover band circuit is quite lucrative,” Larock said whose band recently recorded an April Wine cover.

Doors for the concert on Saturday are at 10pm and admission is $10. Bistro De Paris Night Club is located at 4536 Rue Saint-Denis, in Montreal.