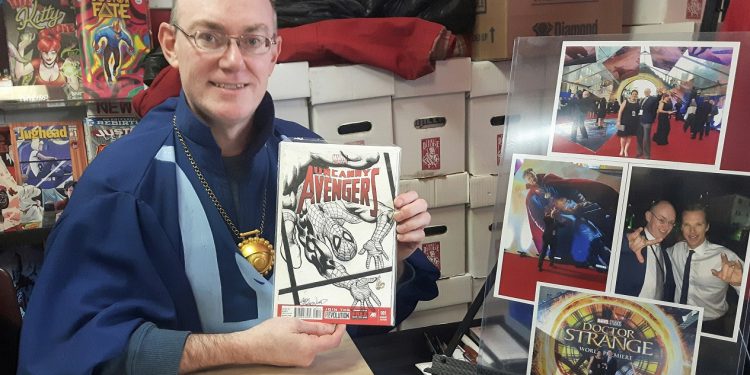 He has done work for both Marvel and DC Comics including such titles as Doctor Strange, the Silver Surfer, Conan the Barbarian, Daredevil, Suicide Squad, and more. He has also been a penciller and inker for such titles as The Astonishing Spider-Man, the Fantastic Four: Atlantis Rising, Thor, and X-Men.

Geof Isherwood was a special guest at the Red Carpet World Premiere of Marvel’s Doctor Strange in Hollywood California on October 20th. He recounts his experience and meeting Benedict Cumberbatch afterwards.

“(We) were invited to an after-party at the Magic Castle, a private club for magicians. There, we had the rare chance to meet and speak for a few minutes with Mr. Cumberbatch himself, a thoroughly charming and gracious man,” Geof Isherwood recounted.

Cornwall fans got to talk comics with Geof, and he drew illustrations of various super heroes.

The Stampeders give encore at Aultsville Theatre concert Friday night