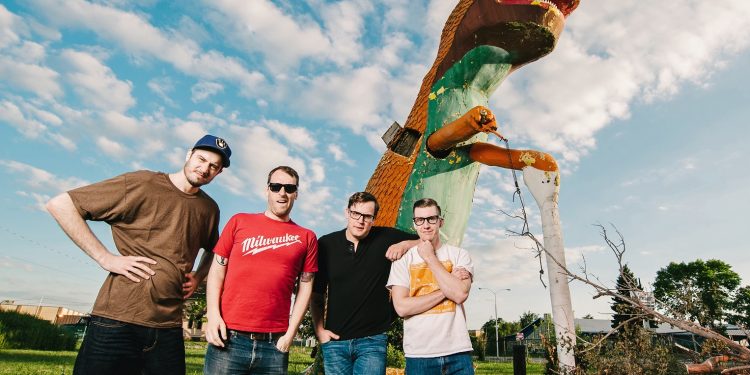 Montreal Quebec – Direct Hit will be opening for Reel Big Fish and Anti-Flag on January 13th at the Phoenix Concert Theatre in Toronto, and again on January 14th at the Metropolis in Montreal.

Nick Woods was formerly in the band The Box Social, whose name was inspired by an episode of the Simpsons. The inspiration for the band name Direct hit was more ‘direct’.

Earlier this year Direct Hit signed to Fat Wreck Chords after Fat Mike of Nofx got a copy of their previous album.

“The story I’ve been told is that Fat Mike got a copy of our previous album, Brainless God, after seeing it on a bunch of Top 10-type lists at the end of the year it was released. And when we sent them a copy of Wasted Mind after we got rough mixes back, he said he wanted to do it right away. And that was pretty much that. There isn’t a whole lot of bullshit dealing with Fat, or politics, or ass-kissing. Which rules. They liked the music and wanted to release it and did. End of story,” says Woods.

For Nick Woods being on Fat Wreck Chords is a dream come true, because punk music and that record label in particular were important to him during his formative years as a teenager.

“In a lot of ways for us, “Fat” meant “punk.” Obviously we’ve all grown a lot since then and that word has come to mean different things to all of us, as it does to a lot of people. But if teenage me knew I’d be able to put an album out on Fat Wreck Chords, he’d have lost his mind. It’s an incredibly validating to be able to contribute to something that’s been so formative for all of us,” stated Woods.

“We wrote more than 20 songs for Wasted Mind, demoed all of them at our friend Will’s house, sent them along to our producer – Mike Kennerty – and picked the best ones with him, then borrowed the coolest stuff from the leftover tunes to make the ones we picked sound as good as they could be. I always write lyrics once we’ve had a chance to work on the songs as a band (I usually just sing doo-doos and nah-nahs at practice), and then fine tune them as we record and as I get a chance to listen to the earliest versions a lot. We spent a couple weeks recording drums and bass and rhythm guitars at Bobby Peru Recording in Milwaukee, and then spent another week or so in my basement recording vocals and guitar overdubs. After that, we did a night at a little place in Madison called ACME Sound Studios, using this big collection of old combo organs to add keys. A dude named Andy Carpenter mixed the whole thing. Emily Lazar mastered it. That was pretty much it,” explained Woods.

The occasional organ along with the occasional screaming melody adds a big sound to the band. “Wasted Mind” is a fantastic album and definitely worth a spin.

“I always like our songs where I get to scream the best. “Paid In Brains” is probably my favorite. “Do The Sick” is a close second,” stated Woods.

The song “Paid in Brains” is the type of song that would be perfect for slam dancing to in a mosh pit at a big festival. It’s a catchy, fun and enjoyable song.

Earlier this year Direct Hit toured with Nofx, and the experience was surreal according to Woods.

“Surreal. On the last night of that trip someone slipped me some, let’s just say ‘candy,’ and I got to stand onstage to watch them close to a sold out Fillmore with “Linoleum.” Somehow I’d managed to miss them playing that song for the whole tour, but it’s obviously one of their better-known jams, and one that I knew when I was just a kid. I’ll never forget what it felt like, being there, and getting to experience it that way. It’s a very special memory for me,” said Woods.

Direct Hit is looking forward to their upcoming visit to Canada and opening for Reel Big Fish and Anti-Flag. Members of Direct Hit are huge fans of both those bands.

“We always have fun playing in Canada – Lots of friends, and the bands we get to play with are always awesome. But it’s sort of a new level this time around. I covered Reel Big Fish in the first band I played with in high school. They were Devon’s favorite band, period, when he was a teenager. Anti-Flag was Danny’s favorite. It’s going to be really difficult for us to not act like screaming little girls for that entire trip, especially in Toronto and Montreal where we’ll have people to brag at,” said Woods with a smile.

This is not Direct Hit’s first visit to Canada. The band has played here many times before.

“We’ve played Canada a lot. The Flatliners let us open a show for them at the Opera House in Toronto a few years ago, we’ve played Lee’s Palace a few times, almost blew the roof off the Bovine Sex Club when we played there with Pkew Pkew Pkew last summer. We also got to play Ottawa Explosion, CMW, Pouzza Fest a couple times. The Isotopes helped us out with a cool show in Vancouver when we were on tour with Pears. I could drop more names, but I’ll spare you,” said Woods.

The band has received some notable press too. For example the Milwaukee Record newspaper ranked the album “Wasted Mind” #3 on their Top 25 Milwaukee albums of 2016. Also Nick Woods was on NBC’s Last Call with Carson Daly promoting the band the year before.

“It was strange! I’d never had my hair or makeup done before, but I guess there’s a first time for everything. Also Carson wasn’t there, which bummed me out, because I wanted to beg him in person to bring TRL back,” explained Woods.

What are Direct Hit’s plans for 2017? For starters another album, and hopefully touring Japan.

“Write a new album and produce it. Try and figure out a way to play in Japan. We have a couple more tours planned for next year too, so hopefully we’ll get to see you all again soon,” Woods concluded.

Tickets for the Toronto and Montreal shows are on sale now and can be purchased online.