Interview with We Are Wolves who released new album WRONG 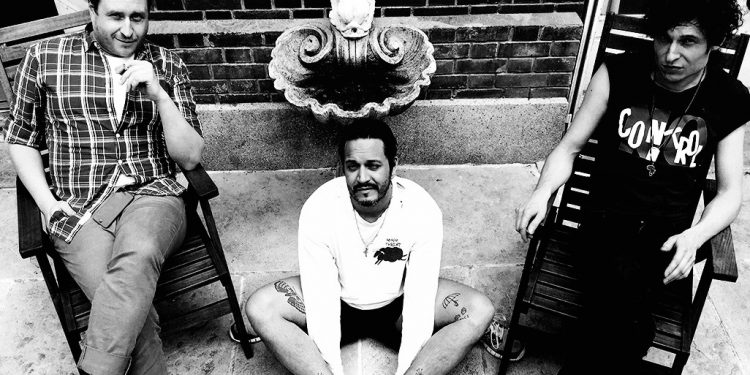 Toronto Ontario – Rock, pop, and electronica band We Are Wolves have a record release party on Saturday, December 10th, 2016 at The Baby G in Toronto.

The Montreal trio, which consists of Alexander Ortiz (vocalist and bassist), Vincent Levesque (keyboardist and backing vocals), and Pierre-Luc Bégin (drums and vocals), are celebrating the release of a new album.

Their new record “WRONG”, released on Fantôme Records, will be available on vinyl.

“We’re very happy to say we will have vinyl, we just got them so it will be our first show with the real deal. They will have fluorescent pink and black foil stamping. We are also working on some DIY print shirts that are very unique” stated Alexander Ortiz.

This is the first time We Are Wolves have an English title for one of their albums. Instead of naming their album “faux” they went with “wrong” because wrong seemed right.

“We wanted something fresh, something new and different from what we always conceptualized with our album titles. Wrong felt so perfect and so right. It’s a beautiful word to look at. it is very positive to admit that there might be something wrong. It brings a critical reflection,” Ortiz pointed out.

You can listen to a music video of the third song off their new album on YouTube.

We Are Wolves are sometimes labeled as primitive or dance punk or post-indie. What is the most annoying label given to the band according to Alexander Ortiz?

“I hate it when they say we are electro-punk,” admitted Ortiz.

The new We Are Wolves album has more of a pop sound compared to their previous releases. This is a departure from what the band has done over the span of fifteen years, however this was not done with any specific intent.

“In the past years when we learned to play our instruments, there was still that naive and raw way of constructing songs. But we also learned how to put less stuff in our songs and slow down the BPM and strangely it sounds more accessible. We never intended in doing it more pop, we just wanted to explore. Or maybe we are just a little happier than before,” Ortiz reflected.

We Are Wolves has enjoyed critical acclaim and popularity for some years now. They have received press in Pitchfork, Spin Magazine, and now in The Seeker.

The song “I Don’t Mind” off of Wrong ranked #4 on CBC Radio 3 for their Top 30 songs of the week earlier this year.

Furthermore, a few of their songs appeared in popular video games.

We Are Wolves have songs in video games like Gran Turismo 5, Need for Speed: ProStreet, and Rockstar Games’s Midnight Club: Los Angeles. These were popular racing games that could be played on consoles like the PlayStation 3. However Alexander Ortiz’s favourite racing game came out years earlier in 1996.

“The best racing game is Mario Kart on the Nintendo 64,” responded Ortiz.

If Alexander Ortiz had a soundtrack of songs for a road trip it would range from Bryan Adams to Fu Manchu.

“The first song would be the rainbow road song from the the Mario Kart Game game. After it would follow with Ghost Rider by Suicide, Sailin On by the Bad Brains, State Trooper (Trentemøller Mix) by Bruce Springsteen, Summer of 69 by Bryan Adams, some old school Celso Piña Cumbia from Colombia, and maybe end with some Fu Manchu and their song King of the Road,” Alexander Ortiz added.

This fall We Are Wolves toured Germany, they performed at the legendary Reeperbahn festival, and they have been playing sold out shows in the belle province of Quebec. Now they are playing in Toronto for one night only.

Bueller and Wine Lips are opening for We Are Wolves this Saturday at The Baby G which is located at 1608 Dundas Street West in Toronto.

The event, which is 19+, is presented by Transmit. The doors open at 9pm and the show starts at 10pm.

Tickets are $10 in advance or $12 at the door. Tickets can be purchased online at Ticketfly.

On December 11th We Are Wolves will finish their latest tour with a show in Hamilton Ontario at the Casbah.