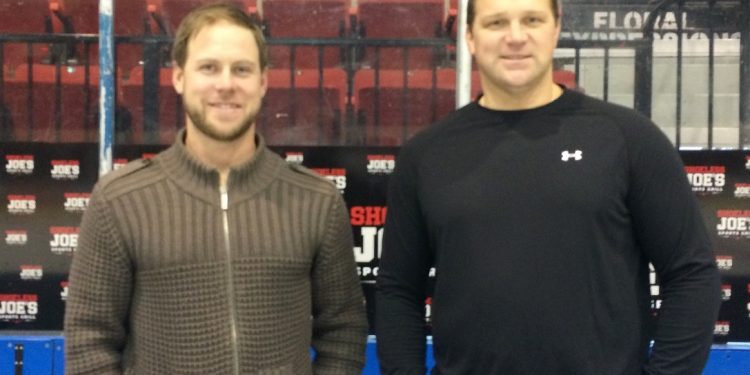 Cornwall Ontario – The Canadian Junior Hockey League announced Tuesday that Martin Dagenais of the Ottawa Jr. Senators (CCHL) and Rick Swan of the Bonnyville Pontiacs (AJHL) have named the head coaches of Team East and Team West respectively for the upcoming CJHL Prospects Game, which goes Wednesday, January 25, 2017 at 7:30pm in Cornwall at Ed Lumley Arena within the confines of the Civic Complex.

The contest will feature 40 of the top NHL Draft eligible players from across the entire 10-league CJHL taking part.

The names of the assistant coaches and training staffs for each of the teams for the CJHL Prospects Game will be announced in the coming days.

The Team East Head Coach is Martin Dagenais. Now in his eighth year coaching in the Central Canada Hockey League, the 35-year-old Dagenais has his Ottawa Jr. Senators side sitting in first place in the CCHL’s Yzerman Division with a 25-10-1-1 record. He was also named CCHL general manager of the year in 2014-15 as well as to the CCHL Second All-Star Team. Dagenais served as an assistant coach with Team Canada East at the recently completed World Junior A Challenge and was a head coach at the Central Canada Cup Challenge in 2015.

The Team West head Coach is Rick Sawn. He is the reigning Alberta Junior Hockey League coach of the year for his efforts with the Bonnyville Pontiacs. He has been both head coach and GM of Bonnyville for the past four campaigns. This season his club sits just two points out of first place in the AJHL’s Viterra North Division with a 25-9-4 record. He was also on the staff of Team Canada West at the WJAC. Previously Swan was a guest coach evaluator ahead of the 2015 WJAC and was involved with the Hockey Alberta Program of Excellence for several years, including a stint an assistant coach with Alberta’s under-16 team back in 2011.

The Team East Guest Coach is Chad Kilger. He spent the 1992-93 campaign with the Cornwall Colts averaging over a point-per-game with 66 in 55 games played, including 30 goals. Eventually he would go on to be selected in the first round, fourth overall, in the 1995 NHL Draft by the Anaheim Ducks. Kilger would go on to play 714 NHL games with seven different clubs, including the Montreal Canadiens, Toronto Maple Leafs and Edmonton Oilers.

The Team West Guest Coach is Jesse Winchester. A three-year member of the Colts from 2001 to 2004, Winchester was captain of Cornwall in his final season where he amassed 82 points on 23 goals and 53 assists. Following a successful four-year NCAA career at Colgate University, where he also served as captain in his senior year, Winchester went on to play five full seasons in the NHL, which included four with the Ottawa Senators.

The CJHL Prospects Game is one of the premier Junior A hockey events in the country and provides tremendous exposure for CJHL players to play in front of scouts from all over the hockey world – including the NHL, NCAA, Major Junior and Canadian universities and colleges.

The President’s Cup is awarded to the winning team in the CJHL Prospects Game.

Since its inception, Team West has won six times while Team East has come away victorious on five occasions.