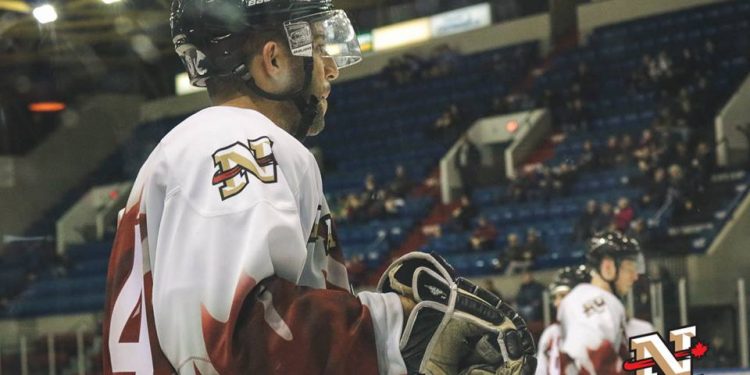 Cornwall Ontario – The Cornwall Nationals dug themselves into an early hole on Saturday night and couldn’t recover, dropping a 4-3 contest at the hands of the Berlin River Drivers in front of 457 fans at the Civic Complex.

Berlin jumped out to a 4-0 lead 25 minutes into the contest and barely held on despite a valiant effort by the home team in the second half of the game.

Kristaps Nimanis opened the scoring for Berlin at 11:36 of the opening frame. Then, with 2:42 to play in the first, Pavel Kubena’s shot trickled past Paul Bourbeau Jr., who made his first start in goal for the Nationals. Moments later, Matt Fuller’s blast gave Berlin a 3-0 lead with 1:48 to play.

Christ Martin pounced on a rebound at 4:56 of the second to chase Bourbeau Jr. from the Cornwall crease in favour of Nicolas Delongchamps.

The Cornwall Nationals came out hitting in the second period and got on the board when Darick Ste Marie banged a rebound past Cory Simons at the 10-minute mark. Exactly two minutes later, Ste Marie found a wide open Anthony Mezzagno, who beat Simons for a shorthanded marker.

JC Houde’s perfectly placed wrist shot beat Simons high glove side with 5:07 to play in the third to round out the scoring.

Cornwall’s Joe Cannan dropped the mitts with Berlin’s Nick Wright in a heavyweight tilt five minutes into the contest. The two would later renew acquaintances in the second period.

The Cornwall Nationals hit the road next weekend for a pair of away games. Cornwall visits St. Clair Shores on Friday, Jan. 13 and Berlin on Saturday, Jan. 14. The Nationals are back on home ice Saturday, Jan. 21 when the Watertown Wolves visit the Civic Complex.