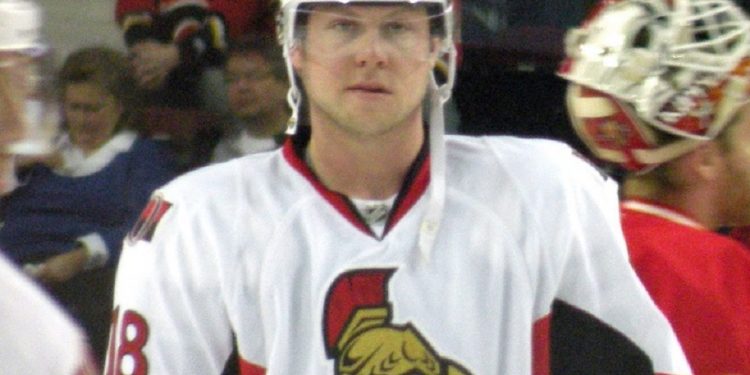 Cornwall Ontario – Jesse Winchester will feel at home when he is behind the bench as an honorary coach for the CJHL Prospects Game which takes place Wednesday, January 25th at the Cornwall Civic Complex.

Jesse Winchester and Chad Kilger, both CJHL Cornwall Colts alumni and NHL alumni, will be serving as honorary coaches of Team West and Team East respectively.

NHL, NCAA, and CIS scouts will be in attendance for the contest which will feature 40 of the top NHL Draft eligible players from across the entire 10-league CJHL.

Jesse Winchester is the perfect role model for these prospects. He spent six years in the NHL playing for the Ottawa Senators and Florida Panthers.

In 2014 he signed a two year contract with the Colorado Avalanche but was unable to play due to injury. He has a career total of 20 goals, 50 assists and 70 points in 285 NHL games.

His road to the NHL began in Cornwall Ontario playing Jr. A.

Born in nearby Long Sault, Jesse Winchester played with the Cornwall Colts from 2001 to 2004. In his final season with the Colts he had 23 goals, 59 assist, and 82 points in 54 games. The Cornwall Colts are celebrating their 25th anniversary this season, and he has fond memories playing with them at the old Si Miller Arena on Water Street.

“I think the team has performed really well this year considering they missed the playoffs last year, and that is great to see. I keep tabs on many of the kids on the roster and I am happy to see them doing so well. Some of my fondest memories of my Colts days are of the crowds that used to pack the Si Miller arena every Thursday night, and how fun it was to play junior in a sold out barn,” reminisced Winchester.

After the Colts he played NCAA DI Hockey at Colgate for four seasons. In his final three seasons of NCAA Jesse Winchester averaged about a point a game.

This is the 10th anniversary of the CJHL Prospects game. Although Jesse Winchester never played in a tournament like this one, he understands the pressures of playing in front of NHL scouts. That is exactly what he had to do while playing for Colgate University.

“Unfortunately I never had the chance to play in a similar tournament. To my knowledge they did not have a prospects game like this when I played for the Cornwall Colts, and if they did, clearly I wasn’t ready to be considered! It wasn’t until I was in college that NHL teams really took an interest in my abilities, and even then as I “knew” I was going to have an opportunity to play professionally, mentally I tried my best to keep the attention from becoming a distraction, and just enjoyed playing and helping my team win,” reflected Winchester.

It’s just about every young hockey players dream to play in the NHL, and while playing with Colgate University, Winchester was offered an NHL contract. He turned it down to improve his game and to complete his degree. It was a tough decision at the time, but it was the right one for Winchester.

“At that point in time it was the toughest decision I had ever been faced with. I opted to stay at Colgate because it was the right one for me. I had never been around the pro game, or pro players for that matter, and I needed time to prepare physically and mentally to make the jump. Also, I felt like I could still improve at the college level, and that was my reason for staying. Looking back I am glad I finished because it allowed me to also get my degree which was important to me too,” reflected Winchester.

For those prospects who dream of one day playing for the NHL, Winchester has some sound advice. They must respect the game and commit themselves to improving and getting better every day.

“The only real advice that I can offer them is to make sure they realize how fortunate they are to be able to play the game at a high level. Most kids coming from this level are still years away from playing in the NHL so the road to get there is a tough one. It’s doable, for sure, but they must learn to really respect the game and commit themselves to getting better every day if they want to someday earn the opportunity to play in the best league in the world,” stated Winchester.

Winchester, who had unresolved concussion symptoms, and unable to participate in the Colorado Avalanche training camp, is now retired from professional hockey. He is healthy now, and focusing on the next chapter of his life.

“The symptoms were unresolved. It was an emotionally draining process because the recovery took so long and I had tried so many different treatments, and because I knew what it meant for my career, but I am healthy now and I am happily retired from the game. I was so fortunate to have lived my dream, and I am now taking the time to enjoy my family while I focus on my next career”, said Winchester.

Jesse Winchester did see some hockey action last month at an NHL alumni game. He played a charity game  and scored a goal in front of the Cornwall crowd.

“I really enjoyed hanging out with guys who played long before I did. We laughed a lot and it was great to see that they are all such amazing ambassadors of the game. Playing in Cornwall is always special and we were all blown away by the size of the crowd that came out to watch us,” said Winchester.

Will Jesse Winchester return to the game and become a coach? It’s certainly a possibility at some point.

“I have considered it, I would love it, and I won’t ever stray too far from the game, but I am also taking some time to pursue some of my other interests to see if there’s a possible career fit elsewhere for me,” Winchester disclosed.

Winchester will get a taste of coaching at the CJHL Prospects Game that takes place on Wednesday, January 25th at the Cornwall Civic Complex. The game starts at 7:30pm.

Tickets for the CJHL Prospects Game are now on sale at the Cornwall Civic Complex box office from 8:30am to 4:30pm – Monday to Friday. Call 613-938-9400 or by e-mail contact David Murphy here – dmurphy@bensonorg.com.