Interview with the Planet Smashers live in Ottawa on February 10th 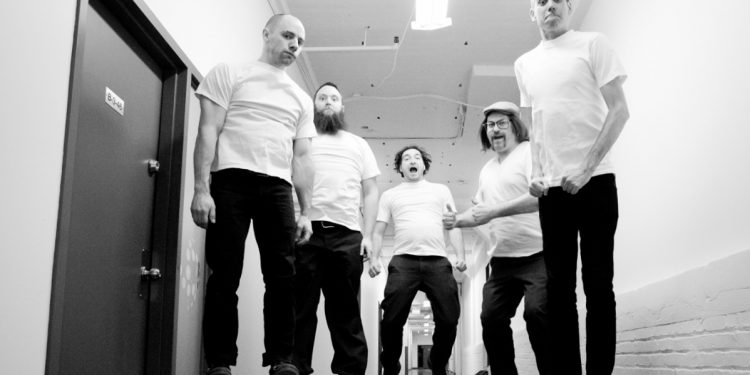 Ottawa Ontario – In the 1990s third wave ska trended across North America. Bands like Reel Big Fish, the Mighty Mighty Bosstones, Less Than Jake, Sublime, and No Doubt made the genre of ska music popular again. Soon numerous bands were adding horn sections, even Bill Clinton was playing the saxophone, and it was simply awesome.

Ska music aso thrived in Canada during the 1990s and one band from Montreal Quebec lead the way.

The Planet Smashers, who formed in 1994, are perhaps the most accomplished ska band in Canadian history. Twenty-three years later they are still bringing audiences to their feet to skank and dance in the pit.

“Pouzza marked my return to playing live after breaking my neck in January 2016, so that made it even more special for me personally (no pun on The Specials). It was one of the funnest shows we’ve ever done. Free, outdoor, beautiful weather, awesome crowd and really good drinks”, said Collyer.

On Friday February 10th, The Planet Smashers, The Cardboard Crowns, and others will play at House of TARG in Ottawa. The Planet Smashers have numerous other shows coming up too including April 21st with Bigwig, Big D and the Kids Table, and more at Club Soda in Montreal.

In addition to playing shows, the Planet Smashers will be back in the studio soon.

“Yes! We’ve just begun so it’s early on. The rough plan is to hit the studio in March for a last August or early September release. Dave’s already written a banger,” exclaimed Collyer.

The origins of the Planet Smashers began with Dave Cooper and Matt Collyer’s chance encounter at at Muffin Shop.

“I ran into Dave Cooper at a muffin shop call mmMuffins. He was holding one drum stick. I asked him, “hey dude, do you drum”, and he replied with a lie “yes”. The rest was our collective unavoidable destiny. But seriously, this was how we met”, said Collyer.

Dave Cooper ended up playing bass (not drums), and the Planet Smashers practiced at the McGill University music department.

“Everyone from the original line up ex-Dave Cooper went to McGill, so there was four of us. After the first album the other three guys decided to get real jobs with pensions, they were smart”, said Collyer. with a chuckle.

Collyer, who was an undergrad at McGill, can relate the characters on MTV’s Undergrads – a cartoon whose soundtrack included music from The Planet Smashers.

“Yes, I can relate to the Undergrads. I had a hell of time figuring things out in my youth, including music but not limited to it”, Collyer disclosed.

If Collyer could go back in time, he would have given himself the advice to learn how to play guitar earlier in life.

“I would’ve told myself to learn how to play guitar five years prior to deciding to start a band (or taken lessons). I could barely make a chord. The Smashers were terrible in 1994, it was like watching people hurt themselves but it wasn’t even funny”, stated Collyer.

Nonetheless, the Planet Smashers became a huge success with hits songs like “Life of the Party, “Unstoppable”, “Blind”, “Missionary’s Downfall”, and many others.

In 1994 Matt Collyer along with Jordan Swift of The Kingpins established Stomp Records. The record label has featured bands like the Planet Smashers, Bedouin Soundclash, Big D and the Kids Table, The Flatliners, and dozens of others.

“Somehow the hobby became a career. I’m still shell-shocked, I keep thinking that I need to grow up and get a real job. Anyway, I’m lucky to work with some super awesome people, the crew at Stomp is the best!”, divulged Collyer.

The Planet Smashers have collaborated with some amazing producers and amazing musicians over the years.

For example, the album “No Self Control” was produced by Steven Drake who worked with the Tragically Hip, Barenaked Ladies, and The Odds. This was the bands first international release and it was well received by college radio stations. Internationally it reached #14 in the Japanese retail sales charts. Videos for the songs “Blind” and “Wish I Were American” were successful and got air play. Working with Steven Drake was a unique experience for Collyer.

“It was really different in comparison with other producers. He invested himself more than anyone else, he was in there, every song, every chord, every note. At times we wanted to kill him, but hindsight is 20-20, he did a great job. None of our other records sounds like this one, and I can safely say he was the closest at getting the band’s live energy on tape”, said Collyer.

The album “Unstoppable” features guest appearances from Jay Malinowski of Bedouin Soundclash and Liam O’Neil of the Stills. Collyer said it was a great experience collaborating with other musicians.

“It was great! Jay was really cool to work with, it was just before their album went massive but I’ve been told that he stayed “cool to work with”. Liam is the bomb. He polished some turds and transformed them into gems (and not only on Unstoppable, he had a huge impact on Descent too). Right now I believe he’s the keyboardist for some band called Kings of Leon”, pointed out Collyer.

Over the decades the Planet Smashers have toured the world, played festivals, and played Warped Tour numerous times. They have toured with acts such as AFI, GOB, Satanic Surfers, Sick of it All, Death By Stereo, Mustard Plug, Samiam, The Aquabats, Rancid, Guttermouth, Catch 22, and countless others.

Who were your favourite bands to tour with and why?

“Tough question as all of these bands are cool to tour with! But if I have to choose it’d be a tie between Mustard Plug and Big D & the Kids Table. They’re just good people, easy to get along with, always looking to have a good time but not too much of a good time. We did a couple tours together back in 2005 with Catch 22, man oh man did I have a time”, reminisced Collyer.

What ska bands would be on Collyer’s playlist if he was going to hit the road?

“It’d be rather long, tons of first wave Studio One recordings like old Bob Marley, Jimmy Cliff, Toots and the Metals, Skatalites, Israelites; Two tone bands like the Specials, Selector, Bad Manners and Madness; Third wave ska like the Bosstones, Op Ivy, Big D, Mustard Plug, and even Less Than Jake; and some new stuff like the Interrupters, Beatdown, Joystick, K-Man + the 45s, Skints, and Los Kung Fu Monkeys. I’d probably sneak “Blind” and “My Obsession” on there by the Smashers cause they’re two of my favs”, disclosed Collyer.

Ska fans in Ottawa and Montreal, don’t have to wait for a major festival. They have the opportunity to see the Planet Smashers in a more intimate atmosphere soon.

The Planet Smashers play House of TARG in Ottawa on Friday, February 10th. Doors open at 9pm and tickets are $17 in advance and $20 at the door. Opening up the show are The Cardboard Crowns and The Sentries. Tickets are available online.

“TARG is going to be a fantastic show. It’s a nice small intimate venue and we have great local bands supporting us (Cardboard Crowns and The Sentries). The venue is one of the coolest in the country and they have great beers and perogies. Lots of dancing and good times too”, said Collyer.

The Planet Smashers are also playing with Bigwig, Big D and the Kids Table, Dig It Up, and the Cardboard Crowns at Club Soda in Montreal. Doors open at 7pm and tickets are $25 in advance and $28 at the door.

“I’m truly looking forward to Smashers with Bigwig and Big D and the Kids Table in Montreal April 21st. We did a Canadian national tour together back in 2004 and had a killer good time – this show is a bit of a reunion. It’ll be a banger, I suggest you get your tickets soon if you’re considering going!”, concluded Collyer.