Cash Me Inside – Chris Cloutier and Nationals piledrive River Drivers 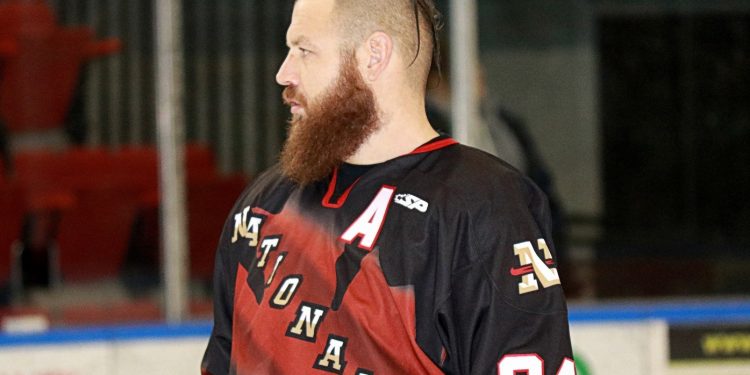 Cornwall Ontario – Patience paid off for the Nationals on Sunday afternoon, as Cornwall snapped a two-game losing streak with a 7-5 victory over the Berlin River Drivers in front of 424 dedicated fans.

The start of the game was delayed nearly four hours because of poor driving conditions. Eventually, the River Drivers, who were in Port Huron, MI, the night before, made it to the Civic Complex.

The Nationals took advantage with a quick start, jumping out to a 2-0 first-period lead on goals by Joel Trottier and Anthony Mezzagno before the game was five minutes old.

Newly signed forward Storm Adams of Akwesasne extended Cornwall’s lead to 4-1 at 3:14 of the middle frame before Mezzagno added his second of the contest, with a shorthanded effort at 6:22.

Berlin’s Dominik Synek returned the favour, with a shorthanded goal of his own, beating Francis Dupuis at 9:32 of the second.

Trottier added his second of the game with a powerplay marker at 10:33 of the second, before Stanislav Vlasov added a goal on the man advantage with 1:16 to play in the second.

Berlin’s Kristaps Nimanis added a powerplay goal at 10:30 of the third. Jiri Pestuka then took off on a semi-bbreakaway and beat Dupuis up high with a nifty backhand.

With 2:04 to play, Nimanis buried a cross-crease pass to bring the River Drivers to within two goals. Berlin fired 20 shots on net in the third period.

Cornwall travels to Berlin to take on the River Drivers on Friday, Feb. 17 (8 p.m.). The Nationals then wrap up the weekend with a home-and-home with the Watertown Wolves.