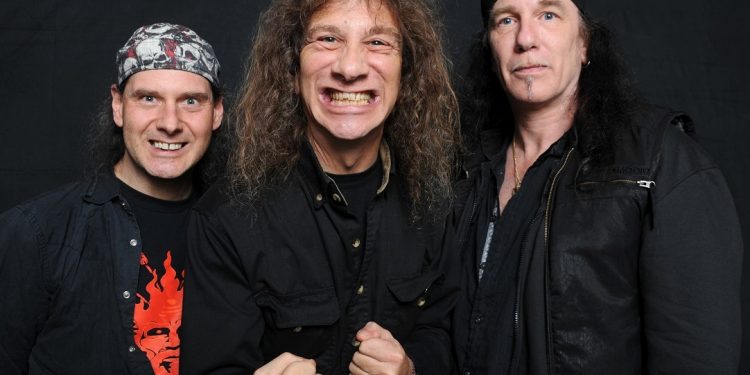 Ottawa Ontario – Legendary band Anvil are touring Eastern Ontario this spring as a part of their Canadian tour. They play Ottawa on May 5th at The Brass Monkey, and they play Cornwall on May 6th at La Maison Tavern.

About a year ago Anvil released their sixteenth studio album titled “Anvil is Anvil” which was recorded in Germany.

“It was among the best recording experiences we’ve had. In a certain way it was similar to our recording in the UK. The biggest difference was far less stress and a level of comfort and getting the recording done quickly and efficiently. The location of the studio was in a farming area with sugar beets. It was peaceful and kept our focus strong,” said drummer Robb Reiner.

Anvil went from obscurity to popularity after a film was made depicting their lives. The documentary “Anvil! The Story of Anvil” was a turning point for the band. After that the band began touring regularly again and rekindled the flame of success.

“As far as the mainstream goes we made the largest impact in our career (with that documentary). We are now touring regularly and making a living solely from the band and living our dream,” stated Reiner.

The band has since toured with the likes of Alice Cooper and even opened for AC/DC.

“I had a great moment when I introduced my 12 year old son to Angus Young. It was my son’s favorite band at the time,” Reiner reminisced.

In the documentary audiences learn how much Anvil influenced and inspired other musicians like Slash, Tom Araya, Lemmy, Scott Ian, and Lars Ulrich.

“As far as our influence is concerned, I had a conversation with Lemmy 39 years ago. I was telling him how influential and unique he was. He said there will come a time someone will say the same thing to you. It’s all about respecting who came before you,” Reiner added.

Anvil has become entrenched in popular culture. Their music has appeared in movies like Green Hornet and Final Destination, in television shows like The Simpsons, and in video games like Grand Theft Auto and Rockband. Members of Anvil have also appeared on television programs like Sons of Anarchy and the Tonight Show with Conan O’Brien. There is no doubt that Anvil has left their mark on the world.

“Anvil has become quite exposed (since the documentary). This was a phenomenon. I think many have tried and not received the same level of exposure. The human story is what resonated with the audience. Although many people after seeing the movie are not familiar with our music they embrace our story and the people we are. We have become world famous for the people we are,” Reiner stated.

Anvil is working on a new album, and Reiner describes the writing process for the band.

“It’s been a never ending process. It’s one really long album! As soon as I’m finished I begin the process over again. Songs are written at our rehearsal space over the times we aren’t out playing. In most cases the songs are comprised of the riffs and parts I come up with at home. We spend a short time arranging then rehearse it until it’s exactly what needs to be recorded,” said Reiner.

“Its timelessness, it’s the metal element, it never gets old,” stated Reiner.

Anvil is looking forward to returning to Ottawa to play at the Brass Monkey again. The band has a lot of memories of playing the Capital over the past 35 years.

“Ottawa has always been a great place to play. We have many fond memories of the early 80’s. We look forward to yet another amazing time,” Reiner concluded.

Local support Lycanthro and Démence will kick off the concert on May 5th at the Brass Monkey in Ottawa. Doors open at 8pm and tickets are available online.

Anvil continues their Canadian tour the next night. On May 6th they are playing at La Maison Tavern in Cornwall Ontario.