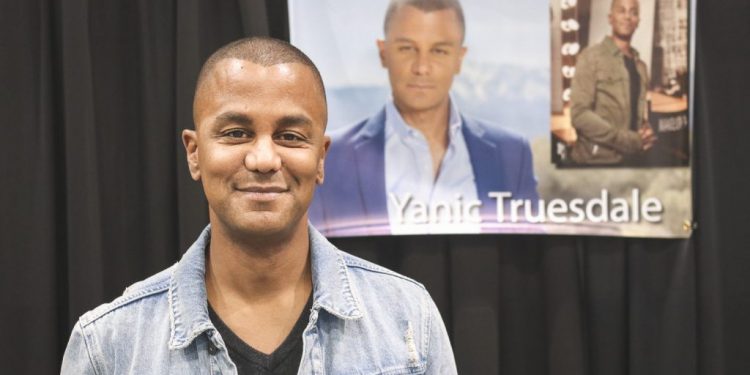 The two time Gemini Award nominated actor is best known for his role as the sarcastic and high-brow French concierge ‘Michel Gerard’ on the series Gilmore Girls.

Audiences got to catch up with Yanic Truesdale’s character on Netflix when the series was rebooted last November with four new episodes in “Gilmore Girls: A Year in the Life”.

The French Canadian actor shares one main thing in common with the character of Michel – his sarcasm.

“I share with Michel mostly his sarcasm. My sense of humour is very much sarcastic. I would say that is the common trait. I’m also not a Celine Dion fan so I don’t share that with Michel, and I am French Canadian which is a little bit different than being French from Paris,” said Truesdale.

The Netflix reboot of Gilmore Girls felt like a high school reunion for Yanic Truesdale. Seeing actress Alexis Bledel was a reminder of just how much time has passed.

“It was great. It was very much like a high school reunion. We were all so young when we met originally. Especially Alexis, she was 16 years old. Now she is an adult and mother and has a child. I think everyone felt very privileged to have a chance to go back to the show. It was great to have an opportunity to give back to the fans,” Truesdale reflected.

The original sets for the Gilmore Girls were destroyed, but with a little bit of movie magic the set design crew recreated the Inn and also brought Stars Hallow back to life.

“What was special for me on set was to walk back to the Inn. Those sets were destroyed when the show was over. It was like a deja vu experience to walk back to a set that you remember, and see it all put back together the same way it was. It was pretty magical on the first day, after coming back so many years later. After a few takes, I turned around to the director and said wow it feels like we never stopped. It all came back very quickly,” Truesdale stated.

Since the show originally premiered in 2000, American society has changed a lot: From smart phones, to Uber, to Kardashian’s, and Vine. One of the biggest changes in the United States happened in 2015 when same sex marriage was legalized.

The character of Michel’s sexual orientation was ambiguous during the original series. It was reveled in the Netflix reboot that his character was gay and married now.

“Society has changed a lot since we first did the show. The first time around Sookie’s character was suppose to be a lesbian, but the network wasn’t feeling comfortable with it, as opposed to now when it is obviously a non-issue. So I think it is great to see the progression of society and television. I was really excited to have more of Michel’s personal life explored. The fact that he is married and they are planning on having children. Seeing him deal with real personal stuff was very gratifying for me as an actor. So I’m really happy about that,” Truesdale disclosed.

There are no immediate plans in place for more new episodes of the Gilmore Girls.

How about a Gilmore Girls spin-off? Could a show about Michel’s character work the same way as the Break Bad spin-off about Saul Goodman?

“I don’t know, I never thought of that. I guess any spin-off depends on the character. I have no clue. You’d have to ask the fans if they think a spin-off with Michel would be something that they’d watch,” replied Truesdale with a laugh.

Yanic Truesdale maintains a busy schedule with acting. He will be appearing soon on ABC’s program The Catch.

“I’m not allowed to talk about the character himself yet, but it’s a reoccurring character on the show, and I’m excited about that. He is so different than Michel, and that is great for me to play. I’m doing that, and I also have a show that is in development that is shooting in Canada, and I’m looking forward to that as well,” stated Truesdale.

Yanic Truesdale, who will be visiting Cornwall for the first time, shares something in common with Cornwall raised actor Ryan Gosling. Both were featured in the same Variety Magazine article about top actors to watch.

“At the time I was very new to L.A. I had been in L.A. for not even a year. This was my first gig and my first show. When that came out in Variety I was not fully aware of what it meant. You have to keep in mind that Ryan Gosling and Jennifer Gardner, and Simon Baker, it was all the first thing that kind of put them all on the map. That’s why we were all on that list. We all had a breakout performance in something meaningful. I didn’t know all those actors at the time, they were all new actors like me. Now when I look back, and like wow I was on this list with all these great actors that became movie stars. I think I can appreciate it more now what it meant to be included on that list as opposed to when it first came out,” said Truesdale.

Yanic, did you know that Ryan Gosling grew up in Cornwall?

“I knew Ryan Gosling was Canadian, but I didn’t know exactly where he grew up,” replied Truesdale.

This will be Yanic Truesdale’s first convention. He is looking forward to meeting the fans.

“I have no idea what to expect. I have never done a convention before. CAPE will be my first. I hope people will come out and say hi. That’s why I’m going, to meet them,” Truesdale concluded.