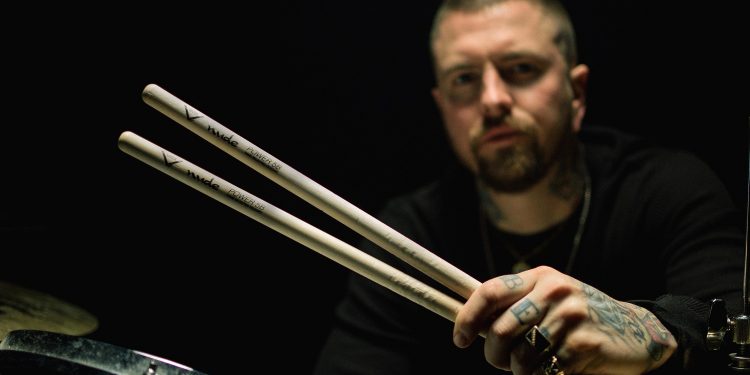 Cornwall Ontario – At just 32 years old, Ryan Leger has made a living and a name for himself beating the skins as a drummer playing for some very prominent bands.

Ryan Leger, who’s resume includes Every Time I Die, Dead and Divine, The Salads, and Skye Sweetnam, is in a new band. He has joined forces with Norma Jean’s Cory Brandan and Dead and Divine’s Chris LeMasters to form Hundred Suns.

“I previously played with Chris LeMasters in Dead and Divine, and we’re going on close to ten years knowing each other. Dead and Divine split-up and called it a day, and he started working on his own project. Pretty early on he asked me if I’d be interested in doing it. I was definitely interested because when I left Dead and Divine I never got a chance to write or record with them. Chris and I became really close friends and we talked about what the next Dead and Divine record was going to sound like, but it never ended up happening. When I had an opportunity to sit down and write with him, I was excited to do it right away. He started by sending me demos. He programmed all the guitar and drums and sent it over to me to see what I thought about it. I would start sending him stuff back. He lives in Burlington and I’m in Cornwall, so we’re still four-five hours apart. A lot of it was done via electronics and recording programs and stuff like that from our own homes,” said Ryan Leger.

Chris LeMasters and Ryan Leger were soon in the search for a singer, and it didn’t take them long to decide Cory Brandan was the right choice for the band.

“We wrote a list of guys we were interested in possibly pursuing to sing for Hundred Suns, and Cory Brandan was one of them. He caught wind of it. We let him know what we were doing. Before we even had a chance to go through any of the other names that we had picked, he immediately sent over a demo with vocals on it. Upon hearing it, Chris and I didn’t bother pursuing any of the other names that we had thought about. It fit, it sounded good, and it was what we were looking for originally. We were going to try out 5-6 guys, but what he brought to the table was what we needed. We immediately went with him. Working with the two of them is unreal. I spent time touring with Chris in a band. I have toured with Norma Jean with Every Time I Die, so we’ve all known each other. Dead and Divine toured with Norma Jean in Europe. The three of us had never been in a room together, yet we had toured or played in bands together. All three of us kind of knew each other some how. Chris and Cory are unreal, get either of them in a studio and they are more efficient than anyone else I ever worked with, so that helps the process. They are extremely talented, both of them in what they do. Once we finally got into the studio, we got to know what each person was capable of and I think the three of us are all pretty impressed with each other, so it’s been a pretty smooth process,” stated Ryan Leger.

Hundred Suns, who debated being on a traditional record label, went another route instead. They began crowd funding on Indie Go-Go with the goal of raising $20,000. They surpassed that amount before the deadline.

“We had stuff written, and we were sitting on it for a while. We didn’t know whether to pursue labels. We hadn’t played a show or anything so it was kind of a weird position to be in as far as going after a record deal. Before finishing the album we decided that we were going to post five demos online and start sending it out to labels. We made a decision to post a teaser online on Instagram. It was only 15 seconds. We put a little clip of the song “Fractional” online and the media kind of picked it up and we released that snippet. By the next day, we received something like 30,000 views on Youtube. We had every media market in this genre of music pick it up and had some sort of link to it or some sort of write up on it. So immediately it got an overwhelming response. We were in the mindset, after touring and recording for years, that we either go big or go home. This is either going to work out and we’re going to continue it or we’ll release some stuff and a few people might be in to it and maybe we’ll just call it a day. By the next day, after the 30,000 views on Youtube, we had offers for festivals, and we had a couple of record labels hit us up by noon. It didn’t take long to get the response that we wanted. We did the whole dancing back and forth thing with labels for a while. We got offered a couple of contracts. After each of us has been doing this fifteen plus years, touring and writing, we just didn’t want to give up our musical integrity and put ourselves in debt,” Ryan Leger explained.

Crowd funding was the best option for Hundred Suns. It just made sense for a band who has done everything DIY.

“What a lot of people don’t realize is that with a record deal you’re just basically getting a loan, and some bands struggle for years to pay back. What we were offered by a couple of labels we decided to continue doing it on our own. We recorded all our own stuff, we wrote all our own stuff, we designed our own merchandise. The whole vision of the videos and anything we put out on social media, it’s all been controlled by us… Anyways, we decided to go the crowd funding route. We’ve done everything ourselves so far, so why not continue to do that. We choose to do that. I was a little leery at first because I didn’t completely comprehend the process of crowd funding… but I realized you are just basically pre-ordering a product that you choose to buy anyways… I was excited once I understood what it really was.. We were a little nervous to go that route because we haven’t played a show yet. We only released a couple of samples of music. The response has been amazing. We hit our goal,” Ryan Leger added.

Hundred Suns are in the process of finishing their new album, and it should be complete with in a few months.

“So far we tracked drums in Toronto, guitar in Toronto, half of the vocals were done in Florida a couple weeks ago, and the remainder of the album should be done in the next month or two. It’s been kind of tricky doing it with everyone’s schedules. Corey is out in Arkansas, I’m in Cornwall, Chris is in Burlington, and we’re also weaving around Norma Jeans touring schedule as well. We kind of have it all figured out now. In the next month or two it should be complete,” said Ryan Leger.

Ryan Leger has come a long way since drumming for local bands like Third South and Misunderstood? in Cornwall Ontario. He still has fond memories of the local music community and growing up here.

“I think the music scene as a whole back than was very exciting. Whether I was with Third South, or Misunderstood?, or filling in for somebody else… It was kinda our lifestyle when we were growing up. It was a big community, and whether it was my band, or you performing, or a punk band from out of town coming through, there was always a couple hundred heads at the shows or a couple shows a week. Maybe it’s the whole community. Without that I don’t think I’d be doing what I’m doing today. That whole era of playing shows at Murphy’s Inn – that’s a pretty big memory. High school, that whole era, the community is a pretty big memory,” said Ryan Leger.

“It was a slow and steady progression. I wanted more. When I finished high school it was either go off to school like most of my friends were doing or it was take a chance and peruse this musical endeavor. A lot of my peers that I was playing with, I sat down with them, and asked are we going to continue doing this or not. I guess I was kinda own my own at the end of the day with this journey I choose to do. I moved to Kingston Ontario. I met Nick from I Hate Sally who was a phenomenal drummer. I met Phil Elliot who played music with Obsidian. I stopped relying on natural talent, and really started working hard to develop myself as a musician and as a drummer by seeing guys way ahead of my time and way above my talent. I just played with as many musicians as I could,” Ryan Leger reminisced.

When Ryan Leger moved to Toronto he continued to network, play shows, and learn. Soon more and more doors opened for the talented drummer.

“I moved to Toronto and it was kind of the same thing. I was out at the bars every night checking out whether it was jazz music or blues music or at the local rock shows. I got to know as many people as I could. I was at one point playing in a metalcore band. I would be playing shows with them and then the next night I’d be going on tour with Skye Sweetnam playing venues with Kalan Porter who was a Canadian Idol winner, then I’d come home and I’d go and do a tour with Dead and Divine going to the States for a couple of months. I basically never said no to anyone to begin with. Anyone who needed a drummer, I went out and played with them. Whether it was an ad in a newspaper for some 40 year old bass player who needed a drummer to jam with, whether it was an indie band where their drummer broke his leg or something. I remember when I got my first drum stick endorsement. I had three bands under my name under the Vater drumstick catalogue – Skye Sweetnam, Dead and Divine, and The Salads. I was playing with so many people. It didn’t matter how much it paid, it didn’t matter how busy the schedule was I just play with anybody who needed a drummer. To the point where when auditions came up, my name started getting mentioned for being out every night at the music clubs and playing with everyone to working at a music shop – my name was in everyone’s mouth in a sense. Anytime an audition came up I would go and try out. That’s how I got The Salads. Skye Sweetnam was an audition but they knew me from the Salads. It just kind of all connected. I fully immersed myself in as much drumming instruction and as much drum playing as I possibly could,” said Ryan Leger.

Now Ryan Leger has entered a new chapter of his musical career with Hundred Suns. Ryan Leger has accomplished a lot in just 32 years, but with his determination and talent, it’s a safe bet that his best work is still ahead of him.