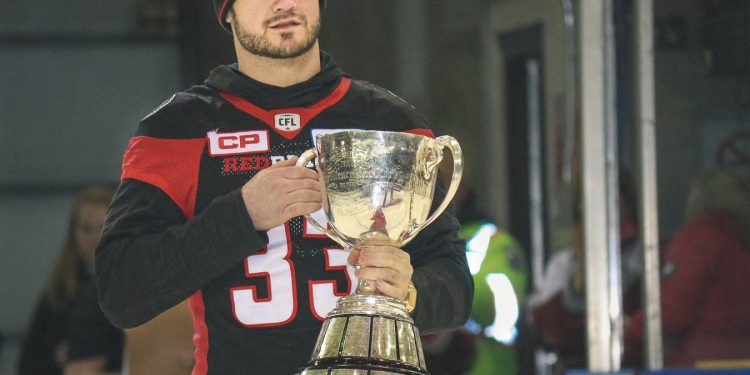 Cornwall Ontario – Sunday, November 27th, 2016 was a glorious day for Dan West and the Ottawa Redblacks. On that day they fought for that extra mile on the gridiron and took home Canada’s greatest football prize. The Ottawa Redblacks defeated the Calgary Stampeders 39 to 33 in overtime to win the Grey Cup.

“I just remember the game. It was unreal. It was back and forth. We were up early and the Stamps came charging back. Honestly, the game could have went either way towards the end, but we ended up on top. When that final ball hit the turf in overtime and we won – it was the greatest feeling ever. It is hard to describe. I was overjoyed, overcome with emotion. It was a blast, it was incredible, and the best feeling of my life,” said Dan West at the start of the second period of a thrilling Cornwall Nationals hockey game that went to overtime.

Dan West, who is a 30 year old defensive back from Cornwall, brought the Grey Cup home. This included a visit to a Cornwall Nationals Hockey game and a special pre-game ceremony which included Canadian Mounties, and a CFL Hall of Fame Football Legend. Four time Grey Cup Champion Maurice “Moe the Toe” Racine, who played with the Ottawa Rough Riders, also participated in the festivities.

1,573 people were in attendance on Saturday night at the Cornwall Civic Complex.

During the intermission fans had the opportunity to take pictures with Dan West and the Grey Cup.

“Coming to Cornwall with the Grey Cup. It was just amazing to see all the people and all the smiles. Everyone was just so grateful and thankful. Honestly I was grateful too, that everyone just accepted me with open arms. It was awesome,” stated Dan West.

Growing up Dan West had a lot of support from his mother when he was pursuing athletics.

“I did have a lot of support. I had my mom, she was a single mom with five kids, and she was like a super mom. She got me to practice. If it wasn’t her, she got me rides there. She always had my back. I had two brothers that also played. I had my sisters, and everyone was pretty athletic. We pushed each other, and I just made it I guess”,” disclosed Dan West.

Football fans will have a chance to see Dan West in action again next season.

“Yes, I’m going to be back with Ottawa next year. I resigned with Ottawa this year for another season,” stated Dan West.

Titans spoil the party with an OT win

There was also a pretty awesome hockey game that took place Saturday night. However the Titans spoil the party with an OT win.

They edged the Nationals 5-4 in overtime.

Danbury’s Taylor Love scored at 1:03 of 3-on-3 overtime to send fans home disappointed.

Matt Coleman opened the scoring for the Titans when his shot trickled past Francis Dupuis at 8:57 of the first.

Veteran forward Lou Dickenson leveled the score for Cornwall with 1:17 to play in the opening period when his pass, intended for Brent Clarke, banked off a Titans defenceman and past a helpless Nick Niedert.

Danbury regained the lead at 1:26 of the second, when Dalton Jay scored shorthanded marker. Moments later, at 3:31, Darick Ste Marie pounced on a rebound and buried his shot for a powerplay goal.

MJ Graham then found a wide open Clarke, who one-timed a shot past Niedert at 9:58 of the middle frame. But, Danbury’s Matt Graham batted a loose puck past Dupuis with 3:16 to play in the second to send the teams to the dressing rooms all square after 40 minutes of play.

Local defenceman Jason Lepine gave the Nationals a 4-3 lead with an absolute blast at 7:39 of the third. With Cornwall on the powerplay, Dickenson found a wide-open Lepine for the one-timer from the point.

But, Jay walked in and beat Dupuis with 3:30 to play to send the game to overtime.

The Nationals have a busy stretch next weekend with three games in three days. On Friday, Feb. 10, Cornwall visits the Watertown Wolves (7:30 p.m.) and on Saturday, Feb. 11, the Nationals travel to Danbury to face the Titans (7:15 p.m.).

Cornwall is back on home ice Sunday, Feb. 12 when the rival Berlin River Drivers visit the Civic Complex. The puck drops at 2 p.m.