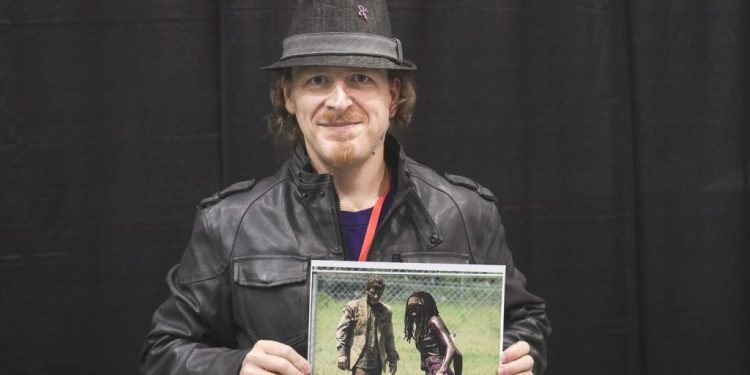 Cornwall Ontario – Three cast members of Walking Dead, including zombie actor Don Teems, are coming to the Cornwall & Area Pop Event on April 22nd and 23rd at the Benson Centre.

Don Teems is an actor and DJ from Atlanta Georgia, who has worked on numerous projects, and he is a regular member of the undead on AMC’s The Walking Dead. He has portrayed numerous walkers on Seasons 2, 3 and 4 of the popular show.

He describes his experience working as a zombie on the Walking Dead as amazing.

“It was an amazing experience. There was lots of great times and relationships created from being on that set,” said Teems.

However, it was time consuming work. Make-up and prosthetics alone would take about two hours.

“Make-up for full prosthetics and contacts usually takes around 2 hours but it is fun watching the whole process so time goes by quick,” said Don Teems.

The twelve hour shifts working on set were challenging, but it also helped Teems get into his character.

“Working 12 hr days in the Georgia heat can get pretty grueling at times, but it does help you get into character,” Teems stated.

Don Teems watches the Walking Dead regularly and he also reads the comics, so the Season 6 cliffhanger was not a huge surprize for him.

“I do watch it regularly and I read the comics so I knew what was coming for the most part. I just give props and respect to the cast and crew for doing amazing work,” said Don Teems.

Don Teems has also worked on The CW’s The Vampire Diaries and other various TV and movie projects including The Originals, The Following, Resurrection, Identity Thief, Flight, The Hunger Games: Catching Fire, Halt and Catch Fire, Anchorman 2: The Legend Continues and Dumb And Dumber To.

In Hunger Games: Catching Fire Don Teems was a background character, he portrayed a worker in District 3.

Is this dystopian film more relevant now, after a bizarre US election? Would Donald Trump be a good fit to lead the Capitol?

“Haha. I think everyone loves a good ‘what if’ movie. As far as Trump that would be interesting to see,” said Teems with a chuckle.

He was also an an extra in Anchorman. What was funniest part of that movie? Who is your favourite actor in that film: Will Ferrell, Steve Carell, Paul Rudd, David Koechner, or someone else?

“We filmed so much that made the cutting room floor for that movie that was so funny I could not even give you one my favorite part because there are so many. My favorite actor is also hard because they were all pretty cool to work with,” Teems explained.

Don Teems also played an extra in the movie Identity Thief. His favourite memories of that experience were the jokes off camera – and also working with Justin Bateman for a third time.

“All of the off camera jokes and shenanigans, it was a fun set. It was also my third time working with Justin Bateman. He’s super cool,” Teems recalled.

Don Teems was also an extra in the movie Flight with Denzel Washington, and he got to speak briefly with the iconic actor.

“I am such a fan of Denzel. I got to speak to him briefly and he is every bit as cool in person as you would think. He is definitely a hard working actor and he is very good at his craft. He makes it look effortless,” Teems disclosed.

Don Teems has been acting for some time now. His career as a background character started with attending auditions whenever he heard about casting calls.

“I have been acting for quite some time now. I heard of casting in the Atlanta area and just went out to casting calls and auditions when something came up I was interested in,” said Teems.

The biggest challenge of being a background actor? It’s a long work day, although the work itself is very rewarding.

“The challenges are the extra long days. Some of that will be spent doing a lot of waiting so sometimes they are a bit boring,” Teems added.

Don Teems has also attended his share of conventions.

“I have attended many conventions over the years and it’s always a great experience so to be on the other side of the table now is a bit surreal but I love meeting fans and having the conversations the arrise from things I have worked on. What is it like to meet the fans? It’s just awesome. A great group especially the Walking Dead fans. What is my most interesting experience at a convention? Ah, there are so many. Hanging out with other actors I grew up with is always fun,” said Teems.

He is looking forward to his visit to Cornwall.

“I can not wait to meet each and everyone of you. See you soon,” Teems concluded.