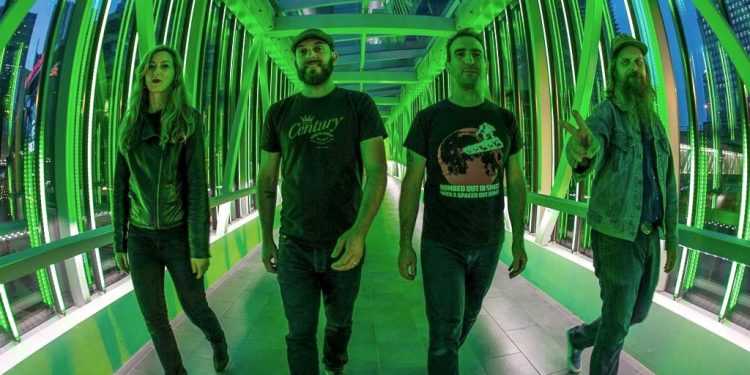 Ottawa Ontario – This is no April Fool’s joke, the eminent Ian Blurton will be in Ottawa on April 1st. Toronto garage rock band Public Animal have a gig at the famed punk rock watering hole the Dominion Tavern located in the heart of the Byward Market.

The concert is a part of CBC’s JunoFest, a two day event that features over 100 bands.

Renowned Ottawa musicians the Steve Adamyk Band will be opening the concert with their entertaining brand of garage punk and rock, as well as Ornaments and Onionface.

Public Animal consists of Ian Blurton (vocals and guitar), Caitlin Dacey (vocals and keyboards), Eric Larock (bass), and Ryan Gassi (drums). Each band member has a diverse background, but together they unite to make a distinguished and brilliant sound.

“The band came together like elements colliding, 4 people from very different backgrounds with very different influences who together make up a singular voice,” said vocalist and guitarist Ian Blurton.

Public Animal have recently released a music video for the song “20th Century Strategies” which has been uploaded to Youtube. The video, which shows live footage of the band is creatively edited, and it immediately gives the viewer a sense of their showmanship and raw authenticity.

“The new video is a live video of the song 20th Century Strategies. There is no narrative, it is us just doing what we do best, play a rock and roll show. All the images came from our Fall Palace Arms tour dates. Our drummer Ryan Gassi edited together like the pro that he is,” explained vocalist and guitarist Ian Blurton.

The song is off the album ‘Palace Arms’ which was recorded at the Tragically Hip’s Bathouse Studios outside Kingston in October. It was recorded over four days under the helm of esteemed engineer Nyles Spencer.

“It was amazing, locked away in a house full of incredible gear for 4 days with nothing to do but create. Staff engineer Nyles Spencer did an incredible job – and we had nothing but good times,” stated Ian Blurton.

The process of songwriting is an intimate experience for Public Animal, and it’s in their jam space that the magic which is their music is created and born.

“We’ve had lots of great experiences so far (and so much love) but because songwriting is so important to this band I’m going to say that just going down to the jam space and creating something new is amazing,” said Ian Blurton.

Before Public Animal, Ian Burton was in the bands C’mon (ex-Nashville Pussy), Change of Heart, Blurtonia, A Neon Rome, Bionic, and he was also a former drummer of the iconic Toronto rock band Cowboy Junkies.

In 2009 Ian Blurton had also released a solo album, and he collaborated with musicians like Danko Jones drummer Damon Richardson and Broken Social Scene’s Kevin Drew on the project.

Ian Burton is also a music producer. He has worked with bands like The Lowest of the Low, Tricky Woo, The Weakerthans, and many others. These experiences as a producer, working with incredible bands, has helped him with his own music.

“Working with bands gives you insight to how they work, good and bad, so I always try and take those experiences and apply them to whatever I’m doing and try not to make some of the same mistakes I’ve seen bands make. That said I’ve also been involved with incredible bands and it’s had not to be inspired by true greatness and hope some of that rubs off on you,” Ian Blurton disclosed.

In the immediate future Public Animal will continue touring and promoting their new album.

“We have a bunch of shows coming up and are always working on new songs so that’s our immediate future. I think the next record is probably a ways off as we just released Palace Arms in October,” Ian Blurton concluded.

The concert is $12 or you can buy the Junofest bracelet for $30 and gain admission to this and all the other shows. Doors are at 9pm, and the event is 19+. The Dominion Tavern is located at 33 York Street in downtown Ottawa.

Interview with The Real McKenzies who celebrate 25 years