Interview with The Real McKenzies who celebrate 25 years 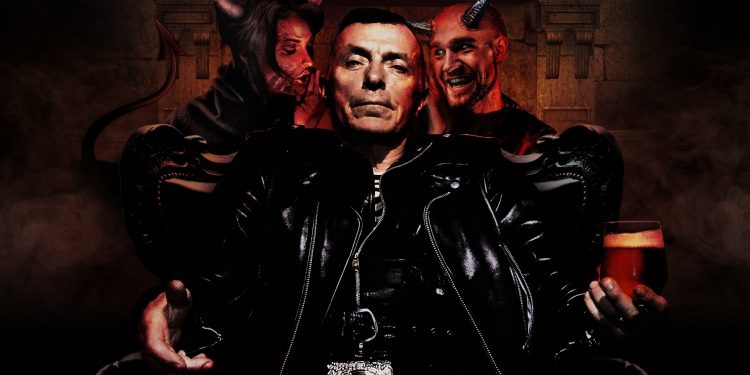 Arnprior Ontario – Celtic punk band The Real McKenzies are celebrating their 25th anniversary with a tour and a new album co-released on Stomp and Fat Wreck Chords (Fat Mike of Nofx’s record label).

“I’m awfully happy that we have survived a quarter century,” said vocalist and sole original member Paul McKenzie with a smile.

How did the Vancouver, British Columbia punk band start-up in 1992?

“The band started with a haggis, a shot of Drambuie, a shot of scotch and an innovative concept,” added Paul McKenzie with a chuckle.

“The album title came up during a conversation between our bassist Troy and our EU agent Muttis over many pints at the legendary Wild At Heart in Berlin. Two Devils are the powers that be in anyone’s life conspiring, making decisions or orchestrating our fates. Sometimes good, sometimes bad,” Paul McKenzie recollected.

The band has released a music video for their new song “Due West” which has been uploaded to Youtube and already viewed over 30,000 times.

“Stan Rogers is Canadian icon. We are proud as Canadians to cover not one, but two of his songs and we’re looking forward to gusselinng a bott’lah booze wi’ ‘im someday,” Paul McKenzie stated.

Should “Northwest Passage” by Stan Rogers replace “Oh Canada” as the National Anthem?

“No, but The Real McKenzies ‘Maple Trees Remember’ should,” said Paul McKenzie with a smirk.

Over twenty-five years The Real McKenzies have toured West to East across Canada numerous times. What have they learned about Canada through their travels and experiences?

“That Gladstone is right in the middle. We love Canada and her people. It’s too bad the politics suck. It’s too bad we stand in the shadow of America,” Paul McKenzie reflected.

“We have shared the stage with far too many excellent bands to answer that question. Any band with the wherewithal and conviction to put up with a band like the Real McKenzies deserves to share the stage with us,” Paul McKenzie mused.

The Real McKenzie’s are playing St. John Pub in Arnprior Ontario (near Ottawa) on May 20th, and the next night on May 21st they are playing Pouzza Fest in Montreal. The festival features over 150 bands including Lagwagon, Pup, The Flatliners, The Real McKenzies and many more.

“On behalf of myself and The Real McKenzies our hearts and minds are swung wide open. We invite one and all to an absolutely fantastic positive energetic rock and roll show. And don’t forget to bring your mums and dads. We will be waiting for you at the bar. Hurry please, because we’re running out of cash,” Paul McKenzie concluded.

The Real McKenzies are also playing Punk Rock Bowling and Music Festival on Sunday May 28th opening for Bad Religion, Choking Victim, and The Bouncing Souls. Iggy Pop, Me First and the Gimme Gimmes, and Pennywise are also playing the festival but on different dates.