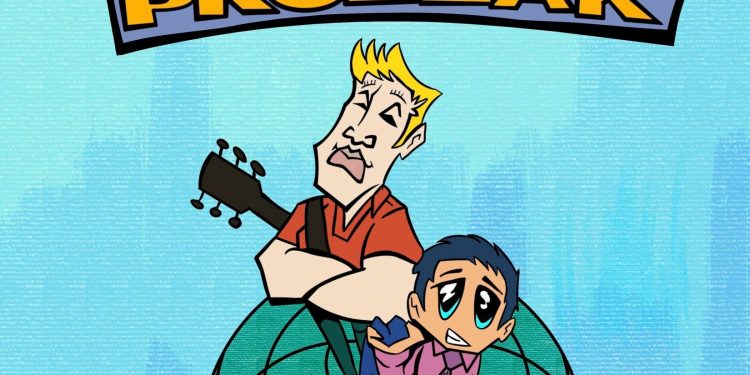 Ottawa Ontario – In 1999 Prozzak tore up the charts of Much Music with their smash hit songs “Strange Disease” and “Sucks To Be You” – both songs hit #1 on the Music Music Charts.

The duo of Jay Levine (Simon) and James Bryan McCollum (Milo) are reuniting on a nostalgic tour and releasing a brand new album – both titled “Forever 1999”.

The fondest memories Jay Levine has of the year 1999 are opening up for Destiny’s Child featuring Beyoncé at Canada’s Wonderland and the growing success of their music videos on television.

“My fondest memory of 1999? Good question. That was really the year that it blew up and took off. It was such an exciting time for both James and I. Prozzak was such an expression of what I wanted to say and express as an artist. Something I really couldn’t do in my other band at the time. It was like James and I were having a rebellion in what we were doing. It was just so cool. One of the memories I always have is Prozzak just on the screen opening for Destiny’s Child at Kingswood (Music Theatre) at Canada’s Wonderland. We were in the audience watching our cartoons on stage and the whole crowd was singing, and it was a giant crowd. They didn’t know we were a part of the crowd and it was super cool. It was one of the best memories, that and then just sitting on the couch at home and watching the thing rise up on the Much Music charts – which mattered at the time. Having three number one’s on Much Music, and my friends and I watching it, saying this is crazy. We’re not even doing anything, it’s just working on it’s own,” Jay Levine reminisced.

Prozzak decided to re-unite after a successful reunion show at Toronto’s Atomic Lollipop. This inspired Jay Levine and James McCollum to write new songs, and go back on tour.

“It’s pretty clear why it happened. There was an article in Vice Magazine that features crazy bands from the late 90s, and we were the main feature in it. I thought, wow this is so cool, but I didn’t think much more about it. Right after that happened we got an offer to play a festival in Toronto called Atomic Lollipop. Which is like a cosplay based event that takes over the Science Centre in Toronto. James called me and told me about it, and I was like really? I don’t know. No one is going to show up. I was really skeptical. He really had to pull teeth to get me to do it. Also, after 15 years of not performing, you can’t just jump on stage and do it. You have to remember all the lyrics again and practice. Prozzak has a ton of lyrics going by super fast. It’s not a simple thing to just do a show out of no where. I was kind of reluctant. I flew off to Toronto, we did it, and it was unbelievable. 4000 people showed up. Everyone was singing the lyrics back. I was shocked. Then after that we realized from the fan response, people really cared about it. It really affected a lot of people when they were 14, 15, and now those people are 30, 35, whatever. Apparently we had an impact. So we’re pursuing it. James and I love writing together, and here we are,” Jay Levine reflected.

Last month Prozzak released a new song on YouTube titled “Love Me Tinder“. Eighteen years later Simon and Milo still haven’t found true love. It turns out in the age of social media, finding a meaningful relationship might be harder. Especially when an app makes it easy to just swipe pass people and dismiss them.

“I think it’s an illusion of choice. A new relationship, or a better relationship, or a fantasy relationship that could be magical and perfect is around the corner, or your next swipe. Therefore people don’t give the reality of real relationships a chance because of that constant fantasy that there is something easy and better right there. But there really isn’t something easy and better right there. It’s not real. There is no connection, there is no reason to date someone just because of their photo. It’s an extremely surface thing and people think, oh it looks like that person has a good life, therefore it must be better than the thing I am in. Everything is better than the thing you’re in because the thing you’re in is real, and the thing you’re imagining is fantasy. So that’s the biggest tragedy of that technology,” Jay Levine stated.

Jay Levine puts his real emotions and feelings into the character of Simon and he writes from the heart.

“It’s all super real with Simon. I think there is a lot of stuff. The cynicism of getting close to someone, and meeting someone else, messing it up, and all that stuff. Then being on the road with the Philosopher Kings at the time and feeling super lonely, thinking I was going to blow another relationship. There is a whole bunch of psychology in all the Prozac lyrics that were completely true. I always say it’s way easier to be hyper honest behind the character with a somewhat sarcastic presentation than to put that stuff out there as just me for real. At least that is my notion of being able to do it. There are people doing it, putting their face on stuff, and it’s amazing. I found for me, it was really freeing being able to sing through Simon other than Jay,” Jay Levine disclosed.

Several music videos are in the works including one for the song “Love Me Tinder”.

“Yes, we are releasing videos. We have a couple of videos coming. “Love Me Tinder” coming out very soon, and “Love Fools Anonymous”, and definitely making another video after that, we’re not sure which one it’s going to be. We’re also talking about developing a Prozzak TV show as well,” said Jay Levine.

In regards to the animation Jay explains why Simon doesn’t have a neck.

“That’s so funny. It’s really super simple. When we designed the concept I literally told the animator or illustrator make him have sad sympathetic eyes that are half eager and half defeated and make him have no neck because he needs to be constantly lost in the music and his head was always suppose to be bouncing to the beat of the music without a neck. Which turns out is a lot harder to animate than I thought. We didn’t actually get to do that as much as I wanted. The concept was originally to have Simon’s head floating on his shoulders and always moving back and forth to the beat,” said Jay Levine.

The music is like medicine for Jay Levine, and it does make him happy like Prozac, the drug the band is named after.

“I have to give credit to that, to our manager of the Philosopher Kings, at the time noticed as soon as I started with Prozzak I got super happy, and I was really miserable in the Philosopher Kings. He was like, it’s really like Prozac. I was like, yeah it is, and we were like let’s call it Prozzak. It was really that simple. The Simon and Milo characters came before the name Prozzak,” said Jay Levine.

During their upcoming tour Prozzak will have giant bobble heads sort of like the ones at their famous Juno Awards performance, except these heads will be inflatable.

“Those heads were actually wood, huge scaffolding heads, but no we never found those heads after. We don’t know where they are, but we do have a replacement option for the tour. These new ones blow up, they are not so hard to transport. But those original ones from that tour we did in 2000, it’s a mystery,” Jay Levine stated.

Jay Levine is looking forward to playing Ottawa, and it would be his dream to have Justin Trudeau join them on stage in the Nation’s capital to sing the song “Be As”.

“I want to start a petition to have Justin Trudeau sing a cameo on our re-make of our song “Be As”, so everyone should write their perspective political people. “Be As” is a great message of inclusion, LGBT rights, and anything you want to be, it’s about freedom and we love Justin Trudeau. We heard he can sing a little bit, and we’d love him to do a cameo. He can do everything else, I don’t see why he can’t sing. That’s what I want to say to our fans, and we’ll see you at the show”, Jay Levine concluded.

The Algonquin Students’ Association presents Prozzak and K.I.D on Thursday, March 30, 2017 at the Algonquin Commons Theatre in Ottawa Ontario. Doors are at 7:30pm and the show starts at 8:00pm. Tickets range from $23.50 to $32.50 and the event is all ages. Tickets can be purchased online.