Interview with The Devil Wears Prada playing Ottawa on May 4th 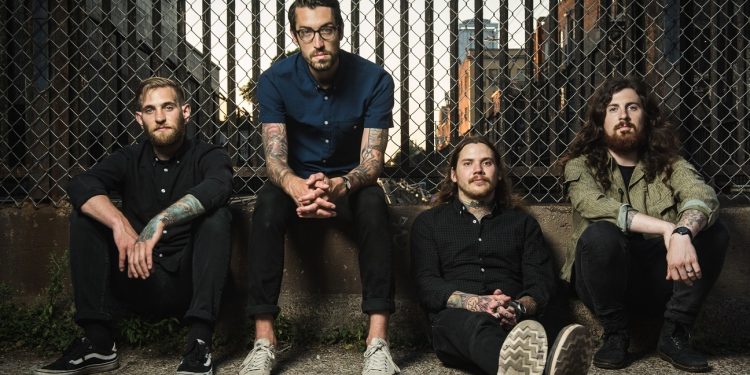 Ottawa Ontario – US hardcore metal band The Devil Wears Prada will be visiting Canada soon. They will be playing May 4th at Mavericks in Ottawa. The Chicago and San Diego based band, who formed in 2006, consists of Jeremy DePoyster (vocals and guitar), Mike Hranica (vocals and lyricist), Andy Trick (bass), and Kyle Sipress (guitar). Giuseppe Capolupo, drummer of Demise of Eros, recorded on the bands more resent release.

“Transit Blues”, The Devil Wears Prada’s latest album, came out this past October on Rise Records. It’s an appropriate title for the album, since there is a recurring motif about the sadness evoked from various travels and experiences in songs like “Worldwide” and “Detroit Tapes”. The road also appears as a visual symbol in the music video “To The Key of Evergreen“, an incredible song off the new record. It’s already been viewed over half a million times in the past four months on the bands Youtube channel.

“I personally really like that video. The director, Maria Juranic, we’ve worked together with numerous times before, and she has really strong vision. Sometimes it’s something her and Mike will kind of co-ordinate together…. I know a lot of the production details that go into music videos seem boring, but when you’re on the creative side of it, there is a lot more going on with it. I think he has tried to get more accessible to the themes he is trying to get across without needing an excess of flowery language, but still sounding mature, and being able to be understood more simply,” said guitarist and vocalist Jeremy Depoyster.

“Transit Blues” also has a song titled “Lock & Load” that touches upon gun violence – an ongoing and contentious political issue in the United States. Mike Hranica penned the powerful lyrics: “It’s hard to name a tragedy when it keeps repeating… Why can’t a child walk down the street?”. Is this song making a political statement?

“I think for a lot of the younger generation especially, it’s weird to even categorize it as a political statement. I think as a band, we’re unbelievably against gun violence, and the rapid accessibility of guns in this country. I don’t think anyone can look at the data and say there is not a connection here. When you look at countries that don’t have as readily accessible guns as you do here, there is just a correlation that is backed by data, so it’s not an opinion. I think we all feel that way. Several members of the band own guns, several of us would never own guns. We do things very democratically, and wouldn’t want to speak for any other person, but I think that we all come from the mentality that it is ridiculous… I think we all approach it from that mentality – it doesn’t make you against the Constitution of the United States to demand that you try to stop some of the violence. Especially here in Chicago, you can literally hear gun shots at times… I think it was just a reaction to a lot of those feelings and just being here in Chicago and seeing it first hand,” Jeremy Depoyster explained.

“Transit Blues” is The Devil Wears Prada’s sixth consecutive full length album to hit the Billboard Top 200. Their most successful albums on the Billboard Top 200 were “Dead Throne” which hit #10 in 2011, and “With Roots Above And Branches Below” which charted for 13 weeks straight in 2009 – a break out year for the band. The Devil Wears Prada appeared on the cover of Alternative Press and were voted 2009’s Band of the Year by its readers. The band also had songs appear on video games such as Guitar Hero and Rock Band in 2009. Guitarist Jeremy Depoyster has played The Devil Wears Prada songs on the video game consoles, but with little success.

“Yes I have, and I really sucked at it, haha. It really doesn’t translate. Maybe I’m not that good at the guitar controller but the five button thing, I don’t know. It’s super weird,” stated Jeremy Depoyster with a smile.

The guitarist and vocalist of The Devil Wears Prada also describes the bands success as weird to think about. According to Jeremy Depoyster it was quite unexpected.

“Honestly, it’s weird to get older and reflect back on some of these things, because no, we never expected any kind of success, ever. So every time something successful happens it was shocking and surprising and everything… There is no plan of how it’s going to work and even if there is, usually the art suffers because of it. I think with what we did and what those groups in those eras did, I think we just made music because we liked it and we group up with this hardcore climate around us. We never compared ourselves to bands like Killswitch Engage or Slayer or anything like that because that was a different world – that was real bands and we were a tiny group of kids. So it was a huge shock, and to this day it’s still shocking to me that people still want to come out to see us,” said Jeremy Depoyster humbly.

2017 is going to be a huge year for The Devil Wears Prada. They have an upcoming tour with Anthrax and Killswitch. Jeremy Depoyster is excited for the tour. He has been a fan of Killswitch Engage before he was ever in a band, and he recollects owning a signed poster of them that hung in his room as a teenager.

“I am unbelievable excited for that tour… I ended up getting a signed Killswitch poster… I have one of those signed in my room. I was a huge fan of the band long before we ever had a band let alone start touring. We went on a tour with Killswitch and Adam (Dutkiewicz who was a producer) was into the band and asked if he could work with us on an album and ended up doing two records together. Massively successful records, more than what we could have ever imagined. The guy is a genius, and literally not metaphorically. He’s like the coolest of the cool because he is so intellectual and such a musical genius but he’s also such a crazy drunken wild man that there’s all these different sides to him. This guy is making a mockery of metal itself but he’s really good at metal. It’s really funny. I’m excited to play with Anthrax too – they literally created the genres we’ve been able to make a living playing. It’s just insane to be around guys like that. Anthrax’s songs and albums are super influential,” Jeremy Depoyster reflected.

“It’s pretty insane, they just started coming in one after the other,” Jeremy Depoyster exclaimed.

The Devil Wears Prada is also working on a new material. The addition Kyle Sipress on guitar has added a new dynamic to the band, and the energy of the bands live show is now translating back into the new albums and recordings.

“I’m not going to say any specifics but we started trading demos back and forth again. There could be some new stuff sooner than we thought. We have a guitar player Kyle who has been playing with the band for a couple of years now. He is such a genius when it comes to guitar playing and music in general. He has a very different way of approaching things than me. The records that we’ve done together I feel like have been some of our best stuff. It honestly feels rejuvenated and like we were just getting started again. We’ve always been a band that relies very heavily on our live show. We just like to bring a lot of energy to passion and leave it all on the stage. I think some of that energy is translating back into the albums. Which is giving them this kind of excitement,” Jeremy Depoyster explained.

The Devil Wears Prada is looking forward to returning to Canada, and this time not in the dead of winter. They will be bringing their brand of heavy, dark, noisy and insanely talented music to the Nation’s capital this spring.

“We love Canada, we’ve been playing there since we were young kids. It’s literally right across the boarder being in Ohio and what not. We toured with Silverstein numerous times over there. I know those guys are much beloved. They are just great people, they are just great guys. They have given us a more intimate look at Canadian cities instead of just showing up to the venue and walking around. Those guys being from there and having toured there their whole lives showed us some of the really cool spots. It will be nice to go up not in the dead of winter as well. Here in Chicago we know the pain. I have some very cold memories of Ottawa,” Jeremy Depoyster concluded with a shiver.

Chord Productions and The Diamond Mine Agency present The Devil Wears Prada, Horcrux, Southpaw, and WKFLD on Thursday, May 4th at Mavericks (221 Rideau Street) in downtown Ottawa. It’s all ages, and doors open at 7pm. Advance tickets are $25 at Vertigo Records, Compact Music Inc., The Odds & Sods Shoppe and available online.