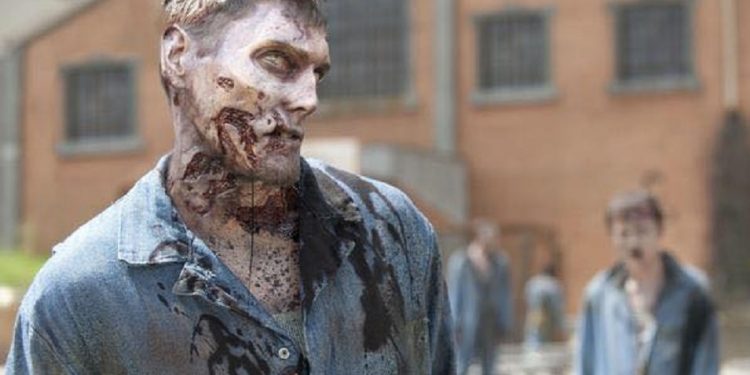 Michael Koske’s acting credits include frequent appearances as a Walker on AMC’s The Walking Dead. His zombie likenesses has appeared on t-shirts, figures, other official merchandise, and he’s graced the pages of Entertainment Weekly, The Walking Dead Official Magazine, the cover of The Ultimate Guide to Zombies, Rolling Stone Magazine, and most recently, the cover of TV Guide.

“I’m still surprised and excited every time my face shows up on Walking Dead merchandise. It’s pretty surreal seeing myself on so much stuff! There have actually been times that I’ve been out in public with my friends and family, and people have recognized me. The show’s fan base is so strong, and the fans really like getting to know anyone involved in the show, so quite a few people actually know who we are. It also helps that Entertainment Weekly had pictures of some of us in, and out of, makeup,” said Michael Koske.

Michael Koske appeared in Entertainment Weekly once again, this time alongside Michael Rooker. Koske is going to be one of the Ravagers in the upcoming Marvel Studios movie Guardians of the Galaxy Vol. 2.

Each movie and television set offers a unique experience, for example the makeup in Walking Dead and in The Originals is radically different. The roles Michael Koske plays are also quite diverse, for example, while he was a zombie on the Walking Dead, he played a solider in the zombie movie The Crazies.

“The Walking Dead has extensive makeup, the Originals had minor makeup, and in The Crazies I was actually a soldier, and not a zombie. A bit out of character for me, huh?,” Michael Koske stated with a grin.

Comicbook and pop culture enthusiast attend various conventions, and some even cosplay and dress up as their favourite super hero or character. Michael Koske understands first hand their love for pop culture. In his youth his favourite superhero character was Spider-Man.

“My favorite superhero growing up, and still to this day, is Spider-Man. I always wanted to be him. I went through a few years of a Superman phase, but I still like good ol’ Spidey,” Michael Koske disclosed.

In 2016 Michael Koske got to live a childhood dream by being in a movie with Spider-Man. He played a background character in the blockbuster hit Captain America: Civil War, which featured the character of Spider-Man played by Tom Holland. Michael Koske, however was in a scene with Robert Downey Jr. who played Tony Stark and Iron Man.

“Most of my screen time in Civil War is actually laying on the cutting room floor, but in the scene with Tony Stark giving his speech at MIT, I was originally an alumni member, but when I got there they decided I looked too young to be one, so they made me a grad student. The cool part was that when I walked in wearing a nice fitted suit, Robert Downey Jr. actually stopped and came over to say I looked sharp,” Michael Koske reminisced.

In 2013 Michael Koske was in some of the District 12 scenes in the dystopian film Hunger Games: Catching Fire. Would Donald Trump and Hillary Clinton be a good fit to lead the Capitol?

“Haha! That’s certainly something to wonder about! They would definitely fit right in the Hunger Games movies, wouldn’t they? I guess since this will be in Canada, I can say that I don’t think either of them should be in charge of leading anything, much less an entire country. If I go missing all of a sudden, you guys know why,” said Michael Koske with a chuckle.

Michael Koske also had a role in the The Divergent Series: Allegiant. Will he be in the upcoming film?

“I was one of the Dauntless Rebels in the movie, and to be honest, my favorite part was being there with so many of my acting friends. I’ve totally lost track of the series, is there another one coming? If so, and they film in Atlanta, I sure hope so,” said Michael Koske.

The Divergent Series: Ascendant is set to be released as a television movie on June 9th, 2017.

The actor also had a role on the television show The Following featuring Kevin Bacon and even played an extra for him.

“This is true, on the pilot I was one of the stand ins for him. I did get to meet him, and he was super nice. The coolest part about being his stand in, is now I can always win the game “Six Degrees of Kevin Bacon”, because technically, I was him. Haha!,” Michael Koske proclaimed.

“Aside from just actually being in such a great movie, I was fortunate enough to chat with him (Kevin Costner) for a little bit in between takes,” said Michael Koske.

How did Michael Koske get into acting in movies and television? It all started with a chance meeting at a GameStop.

“I really just fell into it by being in the right place at the right time. I was in GameStop store talking with a friend who was the store manager, when the prop guy for the The Crazies came in. We were talking and joking around with him for quite a while, and then he invited us to come be part of the movie. Before that, I used to act in high school. I was always the goofy guy that would do just about anything for a laugh and a good improv scene,” Michael Koske recalled.

Michael Koske has been a guest at many conventions before. He enjoys meeting fans and talking with them.

“I’ve been guests at so many cons before, and meeting the fans, and telling fun stories, and listening to their thoughts on the shows and movies, is always my favorite part. It’s because of the fans that I’m lucky enough to keep getting to do this, so I think it’s just right to give thanks, and spend time talking with the fans whenever I get a chance,” Michael Koske replied.

“I can’t wait to meet you guys, and have lots of poutine! I’m kin of hooked on that stuff,” Michael Koske concluded.