Interview with CKY in concert on June 5th in Ottawa 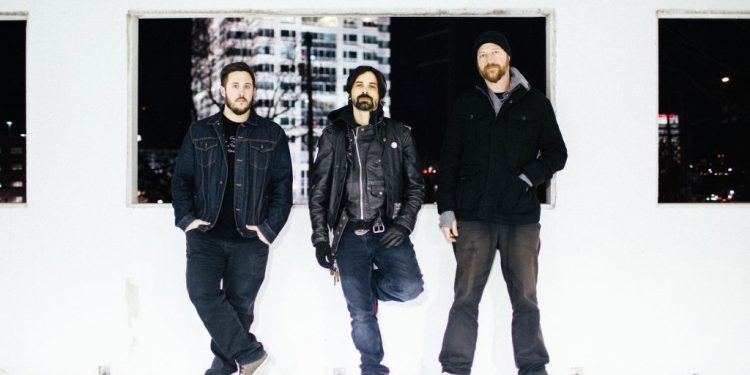 Ottawa Ontario – CKY, who are releasing a much anticipated new album and who will be touring extensively this spring and summer, are headlining a concert at Babylon Nightclub in Ottawa on June 5th.

Chad I Ginsburg and Jess Margera, who are both original members of CKY, met 20 years ago in Philadelphia. They skateboarded together prior to becoming band mates.

“I have been playing with Jess for 20 years. In the beginning Jess and I started skateboarding together. I met Jess skateboarding in Philadelphia where we were street skating back in the day. At that point I didn’t know I’d be playing music with him, but eventually he walked into a studio I was working at (as an audio engineer), and I knew he was a good dude, and here we are today,” Ginsburg explained.

CKY became the soundtrack of a series of skateboard videos produced by Jess’s brother and professional skateboarder Bam Margera (and also by Brandon DiCamillo). These videos, which were the precursor to the Jackass television series, featured CKY songs like “96 Quite Bitter Beings”.

“Jess and I both grew up skateboarding. We weren’t professional skateboarders, but Jess’s brother Bam Margera is a professional skateboarder. Through that connection we ended up sound tracking Jess’s brothers skateboard films which were released on VHS back in the day. Those skateboard films were titled CKY as well as our group name. We combined our music with his skateboarding and pranks and we all took part in these videos called the CKY videos – which were pre-Jackass videos. We are the band that sound tracked those movies and eventually ended up sound tracking more skateboarding related skate culture things. Those were our people and still are. It was a fun start,” Ginsburg reminisced.

The band CKY had their music featured on the television program Jackass. When the MTV series skyrocketed in popularity in the early 2000’s, the band benefited from the exposure and reached a wider audience.

Over the last 20 years what is the most Jackass-ish thing the band has ever done?

“With the band itself, our drummer Jess has taken part in several of the Jackass stunts, he’s been in those movies and the TV show. What’s something Jackass-ish that we’ve done? I couldn’t even tell you. We are more music based and playing rock shows. The band itself, we aren’t stuntmen, we leave that to the professionals,” Ginsburg stated.

CKY are frequently a headline band, however they have opened for some truly amazing bands over the years including Metallica, Deftones, and Guns N’ Roses. Chad Ginsburg describes it as a humbling experience to share a bill with such top notch talent.

“Opening up for such amazing bands such as Deftones, Guns N Roses, Metallica, of course we have so much respect for them, and we couldn’t help but be humbled and flattered. It’s just a joy to play with such amazing acts, they are all top achievements for us. We are a headlining band most of the time. We have brought a bunch of people out on their first tour and they have gone on to do well. Opportunities to play a show with bands like Guns N Roses and Metallica don’t come around too often. We were very lucky to take that and be able to play for their audiences. It’s just an honour that they allowed us to rock for their crowd,” Ginsburg reflected.

The very first time CKY was suppose to open for Guns N Roses in 2002, it didn’t turn out quite how they expected. The very first date of the North American Chinese Democracy Tour ended in a riot (and a vandalized tour bus for CKY) when Axl Rose couldn’t make it to the Vancouver show.

“We were not warned at that show that Axl was not showing up for the Vancouver show in 2002 for the Chinese Democracy tour. That was the first show on that (North American) tour. I’m not sure why Axl was not able to show up, but we played the show. Then we heard a lot of mayhem and a lot of wild stuff happening in that venue. Then we were alerted that our bus was being attacked. I assume they thought our tour bus was Guns N Roses tour bus. So people were throwing bottles, chairs, and whatever they could fine on the streets at our tour bus. We had to have a security blockade to get us out of there. Later in that tour, another riot happened in our home town of Philadelphia, which is another show we played that Axl had not played. By the end of the tour, they alerted us to get out of there before our bus was destroyed,” said Ginsburg with a chuckle.

2017 is going to be a busy year for CKY. In addition to touring and headlining shows all over the UK and Canada, CKY will also be playing Warped Tour. Are CKY a major influence for some of these new up and coming bands?

“We’re doing the US Warped Tour this year, which is filled with young and upcoming bands. I’m hoping we hear some good things, but truthfully I’ve only heard a handful of bands mention us as an influence, which hurts a little bit, haha, but I wonder if we’ll start hearing a lot more of that. I’m not in touch with all the upcoming new bands, and there are so many. I know I get a lot of letters from musicians, we have a large musician following. So I can only imagine if some of these musicians go somewhere soon we’ll hear more,” Ginsburg disclosed.

The first time CKY played Warped Tour was 18 years ago. They were not officially a part of the tour, but found a creative way to get on the Volcom stage day after day. Early bird got the worm at the 1999 Warped Tour and CKY were that early bird.

“During the 1999 Warped Tour CKY was lucky enough to be working with Volcom Entertainment at the time. They were a skate and surf company run by really great people. They had their own stage on the Warped Tour. Their artists were performing. We eventually put our first album out on Volcom Entertainment. We were never officially added to the lineup of that Warped Tour, however we did pretty much the entire tour. The way we did it was very different from most bands. We use to drive my Chevy Astro van across the country, and we would show up at the Warped Tour locations before they built the staging in the morning. We would show up at 6am or 7am and park our van inside the lot. They would build the entire festival around us. We were kind of locked in. We didn’t have any passes. We had friends on the stage, and we snuck on every day. We were doing so well that they just let it happen. It was a very punk rock tour back then, and in a punk rock manner we snuck on every day. We eventually got thrown off the tour because we had one backstage pass to split between all of us and one of our guys used it to get somebody else in which got us busted and had us thrown off that tour. We did that same method at the 2000 Warped Tour, which we also got thrown off of, but 17 years later we were formally asked by the great Kevin Lyman to come and join the tour again,” said Ginsburg.

“This time we are on the main “Journey Left Foot Stage”. We love the Warped Tour, we love being out in the summer, and being outside every day and meeting all the rock fans, it’s a lot of fun. I’m really looking forward to play with a bunch of new music and playing for a bunch of people who have never even seen the band. Some of them might not have been born since the last time we played the Warped Tour,” Ginsburg added.

In addition to major touring, CKY is also releasing a new album.  Chad I Ginsburg’s favourite CKY album is their new one coming out this summer. CKY, who signed to Entertainment One Music, will be releasing their fifth studio in a few months. It is also their first new release since 2009. The album was recorded last summer at Rancho De La Luna studio – a legendary studio that has recorded such bands such as Foo Fighters, Queens of the Stone Age, and Iggy Pop. Like previous albums, Chad I Ginsburg produced and mixed the music on “The Phoenix”. One major change on this new album is that Chad I Ginsburg will now be the lead vocalist.

“Our new album is by far our crowning achievement. It picks up where, “Infiltrate Destroy Rebuild”, our second album left off. Before our new album my favourite was “Infiltrate Destroy Rebuild”. I think that was a perfect album, and I think this new album is also a perfect album and way more on the track of everything we’ve been trying to do musically. I think we hit every nail on the head with this new album. Like all of our records, they are all produced and mixed by me. So they are very much CKY albums. No one else in the industry has there hands in it. All these albums are written, produced, and mixed by us. Out of all of them, our new album “The Phoenix” is our crowning achievement,” Ginsburg reiterated.

Like a phoenix, CKY has resurrected from the ashes and is burning with new life, and fans in Canada will be able to see it first hand. Chad I Ginsburg is looking forward to returning to Canada and playing Ottawa once again.

“When we decided to start touring again, the first tour I wanted to do was Canada. Other tours happened before that, but the one that we booked first officially was Canada, because I love Canada so much, partly because the girls are so damn pretty, and the people are so nice too. I love Canada so much, so that is the first place I wanted to go if we had the opportunity to tour. I’m really excited to get there again, especially now that we are able to go coast to coast. We’re coming back to Ottawa for our first time since 2010 I think. I’m really thrilled to come back to Canada, and I can’t wait,” Ginsburg concluded.

Chord Productions and The Diamond Mine Agency presents CKY, Old James, Eagleson, and the Aphelion at Babylon (317 Bank Street) on Monday, June 5th. Doors are at 7pm and the concert is 19+. Advance tickets are $20 and on sale at Vertigo Records, The ODDs & SODs Shoppe, Compact Music Inc., and via www.chordproductions.com. Photo of CKY was taken by Louie Kovatch.

Transcontinental Inc. launches process for the sale of its local and regional newspapers in Quebec and Ontario