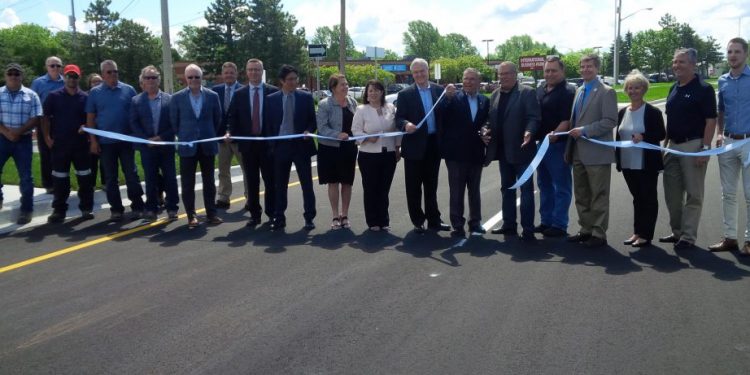 The work involved the replacement of underground services and the reconstruction of Brookdale Avenue from Water Street and the international bridge crossing to the traffic circle at Seventh Street. It was one phase of a larger, multi-year project to demolish the former high-level bridge crossing at Cornwall and replace it with a new low-level crossing to Cornwall Island.

“The Federal Bridge Corporation is pleased to mark the opening of Brookdale Avenue, an important milestone as we near completion of the $74.8-million North Channel Bridge project,” said Natalie Kinloch, Chief Financial and Operating Officer at Federal Bridge Corporation. “The FBCL engineering team led these works, in close collaboration with the City of Cornwall and Louis W. Bray Construction Ltd., to rehabilitate this main artery following the demolition of the high-level bridge.”

One of Cornwall’s main arteries, Brookdale Avenue, also serves as a key gateway to the City for visitors via the crossing to Akwesasne and the United States at the south end and the Highway 401 entrance to the north.
“The City of Cornwall took advantage of this work by making significant investments in the underground infrastructure on Brookdale Avenue,” said Mayor Leslie O’Shaughnessy. “We are very appreciative of the public’s patience and cooperation while this multi-year rehabilitation project was completed.”

The revamped artery includes a sidewalk on the east side and a recreational path on the west side, making it more accessible for not only motorists but cyclists and pedestrians as well.

“This project has been a key part of the City’s Asset Management Plan with major storm sewer, sanitary sewer and watermain replacement being completed,” said John St. Marseille, General Manager, Infrastructure & Municipal Works. “We continue to take steps towards making Cornwall more accessible for all forms of transportation. This project is yet another example of that.”

Brookdale Avenue will be further enhanced with the planting of new trees and additional landscape features in the coming weeks.