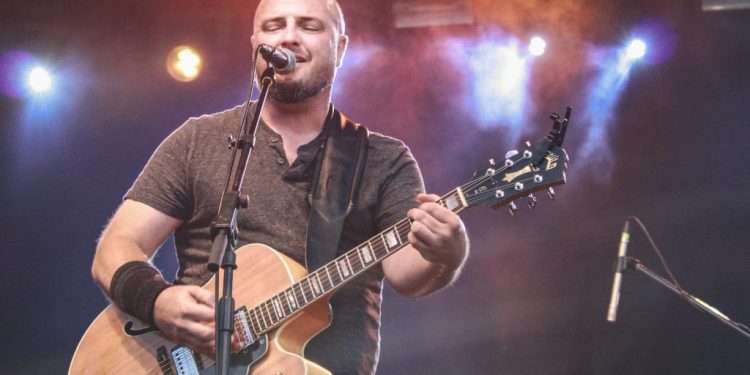 Cornwall Ontario – Legendary Cornwall / Ottawa rock band The Barstool Prophets are playing back to back shows on June 9th and June 10th at La Maison Tavern in the east-end of Cornwall.

Opening the show for the Barstool Prophets are Sevengate featuring Liam Greer and Ben Greer. The show is going to be a family affair, and father Graham Greer couldn’t be happier.

“I think it’s terrific (they started a band)! The best part for me was that it was a complete surprise! Our drummer, Bob Tamas, arranged the whole thing on the sly. I was thrilled when I found out! It’s been an absolute pleasure watching Liam (20) and Ben (14) pick up instruments and learn how to use them. They’ve had no formal lessons whatsoever, although I’d have to say that Ben has benefited from the occasional tip or practical correction from my three closest drummer friends, Bob Tamas, Steph McAlear and Todd Huckabone.

“The boys have always been musical. I noticed Ben keeping great time when he was about 7 years old, and it wasn’t long after that we had him on a junior drum kit in his bedroom. About three years ago I bought him a proper Yamaha kit and he’s been making huge strides ever since a 16 year old Liam convinced his 16 and 17 year old buddies to let his then 12 year old brother sit in on a jam session here at the house. The support and attention of these older kids really spurred him on to improve. It’s been a thrill for me to witness over the past 2-1/2 years I tell you. And sometimes they let me sit in and play… which is even cooler,” Graham Greer added.

Turn the clock back, and it was 28 years ago that Graham Greer was in high school and he met Glenn Forrester, Bobby Tamas, and later Al Morier to form the Barstool Prophets. In high school though, they were known as the Wallflowers.

“Glenn’s father, Rick Forrester, was my high school principal at Char-Lan DHS in 1988. Rick heard me playing guitar in the hallway one day and suggested that I had to meet his son because he played bass and was looking to start a band. Within a few weeks, I found myself over at the Forrester place on Joyce St. in town meeting drummer Bobby Tamas and another guitarist named Phil Inouye. We started playing Tom Petty, Rolling Stones, Kinks, Doors…and found that we had a lot of fun having a lot in common. We played high school dances, local fairs and local bars throughout SD&G as The Wallflowers and started including workings of my original songs in the shows. In 1990, Phil trundled off to McGill to become a doctor, and the three of us found ourselves together in Ottawa. A friend of ours at Ottawa U had a sister who was dating a guitarist, so he arranged for us to meet him. That fellow turned out to be Al Morier, and the rest is a longer story,” Graham Greer stated.

The band renamed themselves the Barstool Prophets, and in 1993, released their first independent album, Deflowered. The following year, after playing frequently in Toronto, and being featured on a CBC television show, the band was signed to Mercury Records.

“We had three record companies courting us when we were making a name for ourselves playing incessantly in Toronto in 1994 …and Mercury had the nicest logo,” said Graham with a wink.

“The music industry is a completely different animal now than it was 20 years ago. We did pretty well as an indie band. We earned money by garnering some national radio play and selling enough CDs with limited distribution to record stores like HMV and via live shows to warrant the attention of record companies,” Graham Greer explained.

For younger bands like Sevengate, the reality of being in the music industry is completely different today than it was twenty-some years ago.

“Today, young bands have the world at their fingertips – platform upon platform of potential fans – but very limited means of making a living at it, especially when those fans now expect their music for free or for a pittance at the very least. The standards by which we measured our successes then barely even exist now. It’s going to be a great challenge for up-and-comers to find viable ways to make their art pay for itself. I don’t envy them,” Graham Greer admitted.

Signed to Mercury Records, the Barstool Prophets released Crank in 1995 and Last of the Big Game Hunters in 1997. Their third album was produced by the talented Joe Hardy, best known for producing Tom Cochrane’s Mad Mad World, in Memphis Tennessee.

“We discussed doing some Anniversary-themed shows this year, but getting the four of us in a room together has proven more and more difficult lately. After the Shenkman anniversary show, we were offered some great festival slots in 2016, but had to turn them down because either Glenn or I were indisposed. This year, more offers came again (the 90’s are big now apparently! Hehe) but Al has a month-long family trip to France than he’s been planning for awhile in July, and Glenn and I are once again away for most of the summer. We booked the ones that fit our limited calendar and that sounded like fun – Barrymore’s last month in Ottawa, two nights at La Maison this coming weekend, the massive Burlington Sound of Music festival on June 17th and then Cornwall’s Musicfest (on August 19th). We have dusted off a few deeper tracks off of Last of the Big Game Hunters this time around so there should be something for everyone at these next 4 shows.

“In 1993, CBC booked us to be a part of a music show taping in Ottawa called Music Works. There were four artists featured: BP, Junkhouse, Lynn Myles and a fourth band whose name I can’t recall. The host of the show was Ottawa’s pop princess at the time, Alanis. We hung out with her all day doing the taping, much if it in front of a live studio audience, and she and I talked at length about her new band she was rehearsing and recording with and how she was toughening up her sound. Those recordings of course became ‘Jagged Little Pill’. And yes, I did teach her how to use a harmonica that day!,” Graham Greer exclaimed.

The Barstool Prophets appeared on television again in 1995. This time for their music video “Mankind Man”. However the song proved to be too much for Much Music.

“In 1995 when it was released, It was cited for ‘violent undertones’ on a Much Music special called ‘Too Much For Much’ because the video featured a dystopian view if the future that was a mix of Lord if the Flies and Mad Max. Considering some of the stuff that would follow not too long after (Marilyn Manson videos come to mind) we were pretty tame by comparison,” Graham Greer explained.

It is believed that the song was inspiration for wrestler Mick Foley’s darkest alter ego Mankind.

“I’ve been told that the song was Foley’s inspiration and that he used it to enter the ring early in his career; until the WWF signed exclusive deals with a single publishing company – not ours – to use their songs for the wrestlers for a period of time.

The Barstool Prophets song “Paranoia”, which also appeared as a music video on Much Music, was also featured on the soundtrack of the 1995 Hollywood blockbuster film “Never Talk to Strangers”. Graham Greer’s name appears in the credits of the film and on the IMDb website as the writer of the song.

“It’s a pretty sub-par film, but it was very popular”.

Graham Greer never watched the film with friends, but he did show the scene where the song “Paranoia” was used to both his sons.

“I’ve forwarded to the scene we’re in and shown my sons when they were younger and they thought it was pretty cool though. Plus, my name is in the scroll at the end of the film, you can’t beat that,” said Graham Greer with a smirk.

“My favourite story is about opening for the incredible blind Canadian guitarist, Jeff Healey, for the first time in 1995 in Calgary. We had a great set and then Jeff blew the doors off the place. We were doing a string of dates with him, so after the show, as we were loading out around 2am in the morning, I went over to him to introduce myself.

His road manager had escorted him out of the club and was just helping him up the steps into his customized Winnebago that he was travelling in. He said “Jeff’s just going around to the drivers side. Meet him over there.”

I walked around to the driver’s window where Jeff was now sitting and we chatted for a while about the gig and the ten or so shows we’d be joining him for throughout the west. His road manager came up behind him in the cab, put a hand on Jeff’s shoulder and said “Alright Jeff. We’re all set to go to the hotel.”

“Well Graham, it’s been a pleasure” Jeff said, “I’ll see you tomorrow night man!” as he turned the key in the ignition, threw the shifter into drive and drove away into the Calgary night, over curbs and barely missing parked cars.

The next night in Edmonton, his crew had a blown up picture of me standing in the Calgary parking lot, dumbfounded, my jaw on my chest, taken from the back window of the Winnebago as Jeff drove the machine back to the hotel; his road manager yelling direction of when and where to turn! Apparently it was a joke they played regularly on unsuspecting openers,” Graham Greer reminisced.

[youtube https://www.youtube.com/watch?v=dl5nf7r9zYE&w=560&h=315]
In 2019, the Barstool Prophets will reach their 30th anniversary milestone, but there is nothing special planned. There are talk about new recordings, but nothing concrete yet.

“There’s been some talk, and some jamming of ideas, and some recording…but, again, it’s hard to pin us all down together.

What can fans expect at the Barstool Prophets upcoming back to back shows at La Maison Tavern?

“Well, first of all, La Maison has undergone quite an amazing transformation under its new ownership – including a fantastic new sound system – so I think it’s really going to be a terrific place to play IN. Between Sevengate and ourselves, I think we’ll be able to do the new joint justice,” Graham Greer concluded with an alliteration.

Both shows, on June 9th and June 10th, start at 9pm. The event is 19+ and tickets are $25 each. Tickets are available online. Tickets are also available in person at La Maison Tavern, at Melody Music, and at the Lottery Kiosk in the Cornwall Square.

Kids honoured at the Cogeco Youth Achievement Awards, powered by the Optimist Club