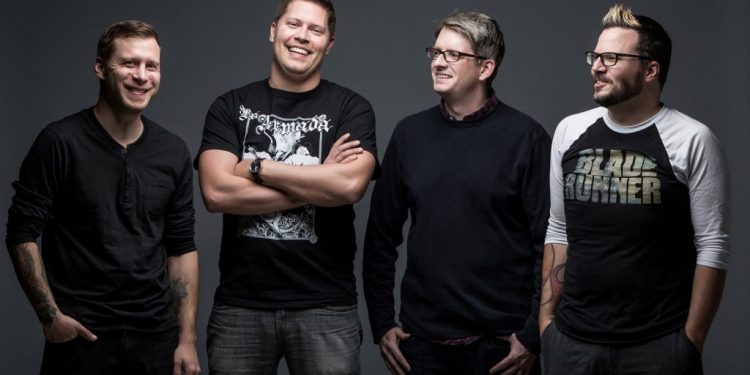 Ottawa Ontario – Calgary punk band Belvedere, along with 88 Fingers Louie, are playing October 6th at The Brass Monkey in Ottawa.

“I probably first heard 88 Fingers Louie during the first few Fat Wreck Chords comps when I was 19 years old, listening to bands like Strung Out, Good Riddance, Mad Caddies, and 88 Fingers Louie was a part of it. They haven’t been super active in the last twenty years, but it’s good to see that they are playing again, and putting out some really good music. I’m a fan, and excited to play some shows. Dan, from the band, we sort of known each other for a very long time. I’ve seen him at a few shows, and played their hometown of Chicago. He’s someone who came out, checked it out, and we kept in touch. We’ve seen each other at a few festivals here in the last few years. It’ll be great to get together and hang out for more than just a couple of hours,” Steve Rawles stated.

Both Belvedere and 88 Fingers Louie are signed to Bird Attack Records. The record label, run by Garrett Wadford, has been making a huge splash in the punk rock world – especially since the signing of Guttermouth a few years ago.

“Garrett Wadford is the one who runs Bird Attack. We knew each other because he ran this online radio station called Bird Attack Radio. I think I first met him five years ago when Belvedere reunited in 2012. He was up to see our show in Toronto at the Opera House. We always kind of kept in touch. The guy just loves to interview bands, he’s super genuine about what he’s doing. That sort of translated into doing a distribution company, and then they ended up putting out records. He put a lot of albums out in the past, and it just seemed like he wanted to really expand things. We were not necessarily looking for a big label, we were looking for somebody that really had passion and wanted to push the band, and which he did. That’s how we came about being on the label. That was around the same he was putting out the Guttermouth album, and setting up distribution, so I knew he was really going for it. Shortly afterwords, he started talking to Such Gold and now 88 Fingers Louie and Authority Zero. Between them, and Mute, Adrenalized, and all these bands he had been putting out, it just seemed like a really good family of bands and we wanted to be a part of that,” Steve Rawles reminisced.

Belvedere’s latest album is titled “Revenge of the Fifth”, and yes that is a reference to Star Wars.

“100% it’s a reference to Star Wars. No cryptic message there. That was a Star Wars theme right there. It kind of developed over time. Scott had sent me this rift for the song, on May 5th last year. He titled the rift “Revenge of the Fifth” because of the May the 4th (May the Force) reference, and the name never left. It sort of developed into the title of the album. That’s a reference and allusion to the Star Wars movie,” Steve Rawles disclosed.

Two music videos were produced for the new album, “Hairline” and “Achilles”. Both videos were shot in Belvedere’s studio, and both are very straight forward and to the point.

“That’s our studio in the music videos. We did two songs “Hairline” and “Achilles”. We wanted some sort of visual of the band and where we are now, and something supporting the record. We thought the $25 we spent buying GoPro’s was justified. It got some pretty good views on Youtube. It really is mostly about the music. It is fun to sometimes do those types of videos. We did have a lot of videos in the past that cost a lot more, with film, actors, and locations, and you start to kind of scratch your head and go, who really cares? People just want to hear the band. So it made sense for us to do something like that, and we’ll probably do something like that again,” Steve Rawles admitted.

In 2018, Belvedere’s first album ‘Because No One Stopped Us’ is turning 20 years old. Are there plans for a special re-release, such as colour vinyl; or bonus unreleased songs, or demos, or live recordings from that time?

“We don’t, but thank you for bringing that up! Maybe that is something we can do. I don’t know if that album is strong enough to hold on it’s own music wise, we were pretty young when we did that, but you’re right, that is the 20th anniversary of that album. TBA. You never know. With Bird Attack Records involved, you never know, anythings possible,” Steve Rawles responded.

Years before Belvedere released their first album, Steve Rawles was a boy growing up in Alberta, learning to play his first guitar.

“I had this Series A red guitar. It was terrible. I think I thought it was good for the time. It’s one of those things where you go to, not even a good music store, and get served a package deal – a little practice amp and guitar for $300. It wasn’t even as good as a Series A. I think it was called a Renegade. I still have it in my basement. It’s missing a few strings, and I’m not even sure if it works if you plugged it in. I had that for my first couple years, when I was 12 or 13 and first started playing guitar. My next guitar I got was this black Epiphone guitar that I toured around the world with for close to 20 years,” said Steve Rawles.

In his formative years Steve Rawles went to see punk shows like Snfu, Nofx and Face to Face. This opened his eyes to just how popular punk music was.

“In the early to mid 90s when I started going to shows in high school, there were a lot of local and regional bands that you would see. You might only get 300 people at the biggest shows. Bands like Snfu were probably the biggest bands to tour around there at that time. I do remember seeing Nofx and Face to Face in 1994, that was at Mac Hall upstairs in Calgary. At that point I had never been to a show where a thousand people were in attendance. I didn’t know a thousand people liked punk at that time. That was pretty influential. You could see these big massive bands, that you thought were your bands, and you were like wow there is actually a thousand people in this room to see this band. That show really had an impact,” Steve Rawles replied.

About twenty years later, it’s come full circle for Steve Rawles. Musicians and fans express what an inspiration Belvedere was on their musical careers or their lives.

“We do hear it, and it’s pretty special, it’s not something we take for granted. When you see people come up to you, and roll up their sleeve and show you a Belvedere tattoo. Or you hear that your band helped get them into music and start a band, or get through a bad situation, it’s something I feel very fortunate enough to have been a part of that,” Steve Rawles observed.

Belvedere are just off the heels of playing their second Rockfest in Montebello Quebec, sharing a bill with Queens of the Stone Age, Wu Tang Clan, Offspring, Rammstein, Iggy Pop, Alexisonfire, and others.

“This is our second Rockfest. We did Rockfest in 2013, and it was awesome. It was a festival I heard about for a long time. That’s one of the first shows we had with our drummer Casey. We did a Japan tour, and than did that a couple weeks later. It was awesome and slamming when we played. It was great to play Rockfest again this year. People can diverge from the main stage to the side stages to see bands like ourselves. It’s pretty rare to be on a bill with bands like Queens of the Stone Age and Wu Tang Clan, its pretty crazy. We were in a good spot with Pup and Frenzal Rhomb playing around us. Those were the two bands we were most excited to see,” Steve Rawles added.

Belvedere are looking forward to their return to Ottawa on October 6th for a show presented by Spectrasonic and punkottawa.com.

“We’ve been doing shows with Shawn Scallen for at least 15 years. We started touring there around 1999. I remember Nick Leadlay who was in Daggermouth, he put on our first couple of shows there at a place called Molly’s. This other guy Nick Cristofaro, he did a show for us with the Mad Caddies at Oliver’s Pub. Other than that, I think Shawn Scallen has been doing most of our shows. It’s funny how that stuff locks in your memory. Sometimes I can’t remember my name or what I did last week, but sometimes I remember the long term stuff. We’re pumped to be coming back, it’s been about five years since we were last in Ottawa,” Steve Rawles concluded.

Spectrasonic and www.punkottawa.com present The Bird Attack Records Tour with Belvedere, 88 Fingers Louie, Such Gold, and Sled on Friday, October 6th, at the Brass Monkey (250A Greenbank Rd). Doors are at 7pm, and tickets are $25 in advance. Tickets are also available at Vertigo Records, both Compact Music Inc. locations and online. For more information about the show visit the Facebook event page.