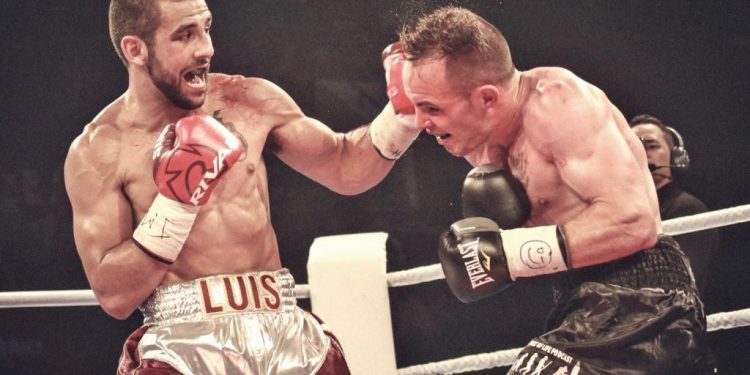 Cornwall Ontario – Meteorologists are predicting that lightning will strike twice when Tony Luis returns to the Cornwall Civic Complex this Saturday, June 17th.

“This fight is very important. The NABA is the North America Boxing Association, and they are affiliated with the WBA, the World Boxing Association, which is one of the major World title belts in the game. So the NABA gets you an automatic top 10 within the World in my weight class, which is great. I’ve been there before, and a lot of press and media still consider me a Top 10 fighter. But a part of the politics of this game is that you have to win belts like this to get back into the mix again. Winning this belt will make me a serious player in the division again. Without giving too much way, we had a very intriguing offer that came up while we were in the middle of the camp for this fight because of the belt I’m fighting for. So again, there will be opportunities awaiting me once I win this fight and take this belt home on Saturday,” Tony Luis declared.

This fight comes at the heels of Tony Luis’s last boxing match. On April 15th Tony Luis, from Cornwall, Ontario, defeated Noe Nunez (ranked 377 in the word) by RTD in the sixth round. While Cam O’Connell, from Red Deer, Alberta, defeated Oscar Barajas (ranked 409 in the world) with a 4th round knockout in March. Cam O’Connell has fought almost exclusively in the province of Alberta, while Tony Luis has fought out of country and out of continent.

“Cam is a different style than my last opponent, he’s a different fighter who’s going to be in front of me this weekend. He’s very hungry and motivated. He kind of has this ignorant fearless state, because he’s still undefeated. He has it in his head he can’t lose. Again, I’ve been to places he hasn’t been, bottom line. As far as my hometown crowd, it pumped me up and it riveted me. I’ve experienced both sides of it in this game,” Tony Luis explained.

Tony Luis has first hand experience fighting for a championship title in someone else’s backyard. That’s exactly what he had to do fighting against Derry Mathews for the WBA World Lightweight in Liverpool, UK.

“I’ve been to arenas where the whole crowd was booing. I went to England where 5000 Brits in the arena booing me. They were all cheering for me by the time the fight was over, but I came out to 5000 people booing me, hurling insults to me all the way to the ring. If I could deal with that, I don’t think I would have any problems with people cheering for me,” Tony Luis stated with a chuckle.

Tony Luis is use to the spotlight, fighting on American television, including ESPN2’s Friday Night Fights. He defeated Karl Dargan, who like Cam Cam O’Connell was undefeated. Tony Luis has also participated in a WWE house event several years ago.

Now Tony Luis is returning home for the second time in as many months. Having home advantage is great, but he is not going to reply on that this Saturday.

“It’s always good to have home court advantage. I also think it’s long over due, in that sense, for me to have some A-side, because I put myself in the underdog role for so many years now, I’m going into other fighters backyards, or the house promoter show, where I’m fighting in a match with their judges and their referee. I’m always the one that has to come in against the odds all the time. I came through anyway. I established myself. I got some good wins on American TV. I established myself as a world class contender. I earned the right to have the advantage of fighting at home. At the same time, it’s not something I depend on, I’m not going in there relying on the judges to do me any favours. I didn’t last time. So I don’t think I’ve given the fans any reason to think that I’m relying on the judges. That’s just not my style. I’ve always been a high pressure action fighter anyway. I’m going in there, and I’ll be doing the judging because it’s in my hands,” said Tony Luis.

With his last fight being in April, Tony Luis is in peak fighting shape, and this has allowed him to elevate his training even further.

“After the last fight I took a couple weeks off to let my body rest a little bit and recover. We had an extra long camp for that fight. I was originally suppose to fight in California in February. Then I got sick. When I got sick, and had to pull out of that fight, I had been in the gym for about 5 or 6 weeks. I loss a couple of weeks when I got sick, but when I got back in the gym again, I had another 7 to 8 weeks to get ready for April, so I had an extra long camp. So for this fight, I took a couple of weeks off to let my body rest, but we still had about 6 or 7 weeks to get ready again, but we were able to do it gradually, and not have to cram so much, and not put things into over drive so soon, because I was already ahead of the curve when I got back into camp again. It was good, and the quick turn around wasn’t too hard on my body because I didn’t take a lot of punishment my last fight. It wasn’t like I was too sore or had to over come injury. It’s been great. So for so good, injury free, god willing. I’m happy I got to stay active,” Tony Luis disclosed.

In 2016, it felt as though Tony Luis’s boxing career had taken a fall, but like Antaeus, the experience only made him stronger. In December, the Cornwall boxer signed a promotional contract with Liveco Boxing, and now his career is back on track. Tony Luis is ready to reach a new pinnacle.

“Last year I had a slow year, I only fought twice last year. I had months and months between fights. I was having issues with my former promoter, trying to get out of the contract. Last year was a very tough year for me emotionally. It put a lot of stress on me. There were a lot of days last year I was discouraged and my head wasn’t in the game, and I didn’t want to be in the gym because I had no idea what was coming up or when I was going to fight again. My career really stalled in 2016. I’m more than grateful my promoter granted me this opportunity and I am able to make up for lost time,” Tony Luis reflected.

Tony Luis balances training with work and family. Tony Luis works as a substance abuse counselor at a boys’ home here in Cornwall Ontario. A full time job doesn’t keep Tony Luis away from a grueling training regiment. He works out 5 or 6 days a week, and working out twice a day on 3 or 4 of those days.

“It’s very intense. It’s the hardest sport in the world bar-none. It’s one of the most physically demanding regiments you can put yourself through in the sporting world. I’m basically training 5 or 6 times a week, sometimes twice a day. I also have a full time job and family at home, so a lot of times I had to master time management and have my training work around my life. I always make sure I’m training twice a day 3 or 4 times out of those 5 or 6 days. That consists of my strength and conditioning in the morning; which I train at Quest with Tom Irvine. It’s a variety of sports specific weight training and other functional strength training with resources and equipment he has besides weights, and a lot of cardiovascular stuff and biometric training. I also have my running program that I follow as well, which is a mixture of long distance running, sprints, intervals, and my boxing training. I get in at least 5 boxing sessions a week. When I’m at boxing, I’m getting a lot of cardiovascular and strength training while I’m there too, while I’m still working on my boxing skills. Sparring, mitt work, heavy bag work, any kind of body weight calisthenics exercise. Any exercise you can think of, we’re doing it, a full body work out. When I’m at boxing, I usually there 2 to 3 hours a night,” Tony Luis explained.

In addition to a full time job, Tony Luis is also married and a father. Tony Luis will have his son Miguel at ring side once again this Saturday. Being a father has given the Cornwall born fighter a new focus and a new purpose in the ring.

“It put a lot of things in to perspective for me when my son was born. He made me a better man. He made me grow up. At the same time he brings out the kid in me too. When we are at home, spending time together, and bonding. He puts everything into perspective for me, and now I realize with boxing, it’s not just about me. I’m not just doing it for me anymore. I’m fighting for a higher purpose. He’ll be there again (at ring side). He’s my number one fan,” said Tony Luis.

There was some trash talk to be heard on a recent podcast that Cam O’Connell appeared on. According to Tony Luis, all the talking he’s going to do will be with his mitts in the rink.

“I do it in my own way. I do it without having to stoop to their level. Trash talk is what it is, trash is trash. If that’s the class they choose to put themselves in, that’s on them. For me, I’m a gentleman outside the ring, I just prefer to do things my own way. I got my style, but in the ring, I’ll be doing all the talking. They’ll hear from me in the ring on June 17th. Cam can say whatever he wants to say to pump himself up, but June 17th he has to come and see me,” Tony Luis responded.

Boxing fans are going to get their money’s worth on June 17th. There are a great lineup of matches including the main event, and the opportunity for fans to see Tony Luis win a championship right here at home.

“The fans can expect another great show. I bring it every time. I hope we get another great turnout again, or even better. I was very grateful for the feedback and support from my fans the last fight. Fans can expect lots of speed, lots of action, very explosive. They’re going to get their money’s worth,” Tony Luis concluded.

Tickets for this incredible night of boxing are on sale at the Cornwall Civic Complex box-office, online at www.admission.com or by phone at (613) 938-9400.

Interview with Bif Naked live in Ottawa on June 24th