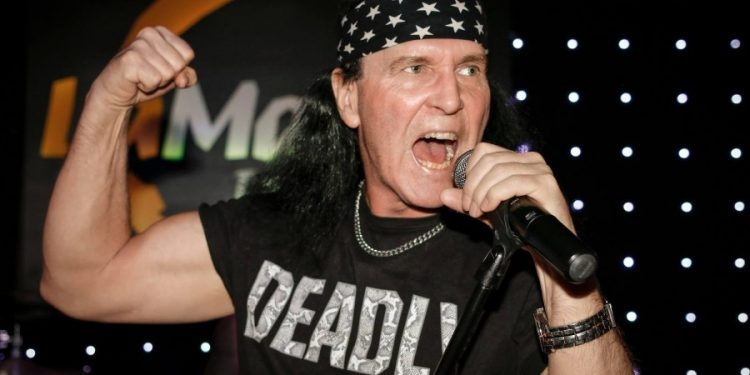 Sydney, Australia – Before Bon Scott there was Dave Evans. He was the original lead singer of world renowned rock band AC/DC from 1973 to 1974. Dave Evans, the King of All Badasses, is back!

“A few years ago Barbed Wire contacted me regarding touring in Norway and Sweden. I checked their music out on Youtube and the band really rocked in the Aussie hard rock tradition as they were big fans of AC/DC, Rose Tattoo etc… including my own music. I accepted and have toured several times with them now over the years,” Dave Evans responded.

Dave Evans was happy to be back in the studio to record the EP ” Wild”, and a music video for the song “Queen of the Night”.

“It’s always great to be back in the studio. Barbed Wire asked me if I would like to record with them on a joint project and as they had become good friends and because I enjoyed their own recorded music. I accepted and during my last tour with them in late 2016, we went into the studio and put down a four track EP. The hard copy on Real Vision Records also includes a 5th bonus track, House Of The Rising Sun, which is a live recording of myself and Barbed Wire,” Dave Evans explained.

Another song off the new EP is titled “Sunset Strip”. It was during Dave Evans time in AC/DC that he originally wrote and played that previously unrecorded song with AC/DC. “Sunset Strip” is a must hear song for AC/DC fans interested in the bands early history. The song was also a perfect fit for the album new “Wild” with Barbed Wire.

“When we were discussing the new EP to be recorded I mentioned that I would like to do a good old fashioned 12 bar rock n roll track which we all agreed on and then I remembered the original track I had written and performed with AC/DC all those years ago – Sunset Strip. This was very popular with the fans and the hard core AC/DC fans were quite aware of it worldwide. I decided to rework the arrangement and kept most of the original lyrics and record the new version of the song for posterity. The fans who have heard it love it and I will be performing it on my upcoming tours starting in August,” Dave Evans stated.

The album “Wild” has been getting radio airplay in the United Kingdom, the United States, and Australia. The song “Go Wild” hit number one for several weeks on one of the music charts from Down Under.

“Yes, it’s great to see airplay with the new EP “Wild” in the UK, USA and Australia with the track “Go Wild” from the new release already charting for several weeks on one Australian Music Top 10 chart,” Dave Evans added.

How did Dave Evans become the first lead singer of AC/DC?

“I answered an ad in the Sydney Morning Herald newspaper for a heavy rock singer and Malcolm was on the other end of the phone line when I called. My band at the time, Velvet Underground (not to be confused with Lou Reed’s band) had just split up. Malcolm had been in the band earlier before I had joined them so we both knew of each other. He asked me to come for a jam with Larry and Colin as they were forming a band. I met up with them and jammed and we then shook hands and said we had a band! We did not have a name yet though. Angus auditioned a week later as his band Kentuckee had also split up and then he was accepted as the fifth member of the yet unnamed band. We decided on AC/DC a few weeks later,” Dave Evans recalled.

What was it like working with Malcom Young and Angus Young in 1973?

“We rehearsed often and we were all totally dedicated to being a smash hit from the very beginning. It was all positive vibes and a total belief in ourselves. The whole band rocked hard with extreme enthusiasm,” Dave Evans remarked.

In 1974, Dave Evans and AC/DC played a concert opening for Lou Reed. What do you remember of that night?

“Yes, that was great for us, as Lou Reed was noticeably not physically well at that time… and we just blew him off the stage with no problems. Lou was rather lack lustre and lethargic on stage while we made such a huge impression with the crowd and the journalists who attended,” Dave Evans disclosed.

In 2010, Dave Evans and Thunderstruck recorded a tribute album to Bon Scott, and the 20th anniversary of his passing. How well did you know Bon Scott?

“Bon used to hang out with us when we were touring in Adelaide, South Australia promoting our new hit single, “Can I Sit Next To You, Girl?” He was always cracking jokes and was happy to help us one night when we were running late for a show and the whole band and Bon pitched in and helped the roadies unload the gear onto the stage. Nice of him to lend a hand,” Dave Evans reminisced.

AC/DC recorded their very first album with Dave Evans, a 7″ record that is quite rare. AC/DC “Rockin In the Parlour/Can I Sit Next To You, Girl” 7″ Vinyl record sells for over $1000 on Ebay.

Their very first single hit the charts. The song “Can I Sit Next To You, Girl” ranked at #50 on Australia’s Official Music Charts (ARIA).

Do you think there should be a re-issue of that album to make it more accessible to the fans that want to hear the early history of AC/DC?

“For sure. This was the first release that kicked off the band and was a national hit for us and put the band on its way to the top,” said Dave Evans.

Their was also a music video shot of “Can I Sit Next To You, Girl” with Dave Evans as singer of AC/DC. In the video Angus Young has already adopted his school-uniform stage outfit.

Soon after AC/DC and Dave Evans parted ways. After AC/DC, Dave Evans joined the band Rabbit and they signed to CBS records. The album “Too Much Rock And Roll” had a considerable amount of commercial success. Dave Evans musical resume also includes being a part of The Badasses, The Hot Cockerels, Thunder Down Under, and the Apprentice.

Dave Evans collaborated with former Alice Cooper guitarist John Nitzinger to produce the album Revenge in 2013, and in 2014 Evans released an EP length album that was nominated for two UK Music Industry Awards.

What was it like to collaborate with former Alice Cooper guitarist John Nitzinger?

“Johnny is a true legend and it was such a privilege to record an album of his songs. The album, Revenge, has had the highest praise from around the world,” Dave Evans responded.

Dave Evans is now keeping busy touring and promoting the new album with Barbed Wire. Are there any plans to return to Canada in 2018?

“I am talking to a promoter at the moment about a return to Canada for next year. Let’s see what he can do,” Dave Evans concluded.