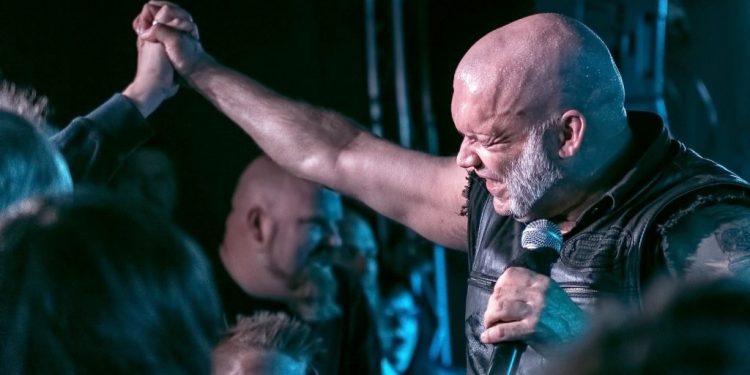 “Endure and Survive”, the title of Blaze Bayley’s ninth solo album, was released in March of 2017. It’s the second in the “Infinite Entanglement” trilogy which tells a creative sci-fi narrative.

“The album “Endure and Survive” is a follow-up, part two of a trilogy, based on a science fiction story I’m writing called “Infinite Entanglement”. Part I is “Infinite Entanglement”, part two is “Endure and Survive”, and we recorded it at Robannas Studios in Birmingham England. I produced the album myself with Chris Appleton, who is the guitarist, and I think it’s turned out really well. The fans I heard back from are saying it’s the best thing I’ve ever done. I’m really pleased about that, but it’s also a little bit scary. We are writing part three at the end of the Canada and USA tour and we’ll be going into the studio and starting part three. It’s gone very well, I’m pleased with it”, said Blaze Bayley.

This is the first time Blaze Bayley will be joined by his regular touring and recording band, featuring members of Absolva, in Canada.

“It’s a band I’ve played with in Europe, they’ve done four tours for me, and they have performed on both of these albums: “Infinite Entanglement” and “Endure and Survive”. They are a band in their own right called Absolva. The bass player from Iced Earth, Luke Appleton, when he’s not on tour with his other band, he’s on tour with Absolva. This is the first time I’m able to take them further a field. What fans are going to get is the same top notch European band that I rehearsed and recorded with at every show on this (upcoming) Canadian tour. I’m very excited about it,” said Blaze Bayley.

“I’ve worked with a lot of different musicians around the world. Last time I was in Canada I worked with some local musicians who were absolutely fantastic. They learned the set list really well. It was a great pleasure to work with those guys, but it’s nice to go with the guys I record with and tour with most of the time. Having that kind of telepathy we have, and a mass repertoire. We can change the set any night that we feel we want to try a couple of different songs, because we all know it.” Blaze Bayley added.

A music video for the song “Escape Velocity”, directed by Richard Pembridge, and written by Blaze Bayley, Chris Appleton, Michelle Sciarrotta – was recorded using Bruce Dickinson’s flight simulator. Of course, Bruce Dickinson was the singer of Iron Maiden before and after Blaze Bayley.

Blaze Bayley was the lead singer of Iron Maiden from 1994 to 1999, replacing Bruce Dickinson, and later being replaced by Bruce Dickinson. Blaze Bayley recorded two albums with Iron Maiden: “The X Factor” and “Virtual XI”. Hit songs during this time period included: “Man on the Edge”, “Lord of the Flies”, “Sign of the Cross, “The Edge of Darkness”, “Futureal”, and “The Clansman”.

Hundreds auditions occurred to find the new lead singer of Iron Maiden in 1994, and Bruce Bayley was selected. According to Bruce Bayley himself, he wasn’t the best person for the job.

“I don’t think I was the best person at all. I think a lot of people there were better singers than me. It’s a complete mystery to me why they choose me. My voice is so different to Bruce Dickinson. I did love the band, I was a huge fan of the band before the audition. I knew all the songs, and I also knew all of the drum parts as well, and I could air guitar every single rift of every song, so I think perhaps that helped a little bit. For me, the most important thing about being in Iron Maiden was the music. It’s just fantastic. I loved singing that music, and learning the writing process, and working with Steve Harris, who was like a mentor to me. I really feel like I found my true voice in Iron Maiden, and I carried on with the lessons I learned about song writing and singing since then. That’s what I put into my own solo recordings,” Blaze Bayley reflected.

What was Blaze Bayley’s favourite album or song with Iron Maiden? It’s too hard for Blaze Bayley to pick one album or one song, but he really does enjoy performing the song “Virus” that appeared on “Best of the Beast”.

“It’s too difficult to choose. There are so many great songs on both albums. You’ve got “Sign of the Cross”, “The Clansman”, “Lord of the Flies”, and “Virus” on Best of the Beast album which is one of my favourites. I do my own version of “Virus” in my live set, and it sounds absolutely lovely. Iron Maiden never played “Virus” live. Both albums are dear to my heart, and I learned so much on the tours that we did together. It was an absolutely fantastic time,” Blaze Bayley replied.

Blaze Bayley also sang with iconic metal band Disturbed at UK’s premier music festival Download in 2016 in front of 85,000 fans. He was invited to sing vocals on a cover of “Baba O’Riley” by The Who.

“That was it. It was a total surprise. Nobody in the crowd knew about it, none of my friends knew about it. We kept it a complete secret. In the middle of the Disturbed set when they had the guest singers, there I was, and people couldn’t believe it. 85,000 people I was singing in front of. It was absolutely fantastic, but really really scary because those guys do not have monitors on stage, and I’m use to having big monitors on stage. These big wedges you can stand on and what ever. I really felt like I was going to fall off the end of the stage. The stage was so high, and it was such a huge festival. They must be use to it by now obviously. That was mad. When I first got on I was looking for the edge of the stage, and there was no monitor, it just looked like it disappeared. The song we sang, it was the “Baba O’Riley”. It was a lot of fun because I’m a fan of The Who,” Blaze Bayley added.

Fans of Blaze Bayley, and fans of his previous work in Iron Maiden and Wolfsbane, can enjoy a more intimate concert at the Brass Monkey on August 17th. They can even get autographs and photos with Blaze Bayley after the show at a special meet and greet for no extra charge.

“There will be a free meet and greet after every show unless I’m ill or have to catch a plane. Special thank you to all the fans there. I’m very excited to meet people. If they want to bring their Iron Maiden stuff, and their Wolfsbane stuff, as well as my solo stuff to get signed, and have photos, that’s absolutely fine with me. I’ll be hanging around after each show to make sure I have time to sign autographs, and have photos with the fans. It’s completely free, it’s just a thank you from me. I’m really excited about coming to Ottawa, Ontario. I’m looking forward to it. I absolutely can’t wait to see you,” Blaze Bayley concluded.

The concert in Ottawa starts at 7pm, the event is 19+, and admission is $20. Tickets are on sale online at Ticket Zone, or in person at the Brass Monkey or Long & McQuade in Ottawa South. For more information visit the event page on Facebook. Photo of Blaze Bayley taken by Terje Johansen.