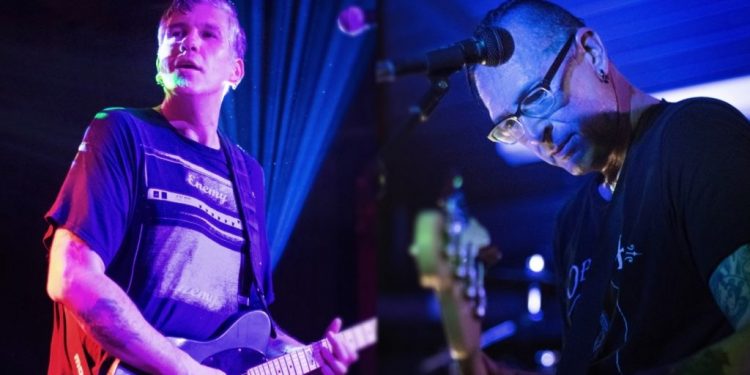 Over a 29 year career, Voodoo Glow Skulls have 9 full length albums, and have sold over a million records. However, it’s been five years since the bands last full length album. “Break the Spell” was released in 2012.

The band is working on a follow-up album on Stomp Records, but there is no official release date or album title yet.

“We have been working on new music off and on for the last couple years in my home studio in Riverside, California. New ideas true to the original sound and style of the band. It will eventually be released on Stomp Records and there is no title yet,” said Eddie Casillas of the Voodoo Glow Skulls.

Frank Casillas who was vocalist, and Eddie and Jorge’s brother, is no longer in the band.

“People don’t really know or realize that Frank moved away from our hometown, Riverside, California to rural Arizona over 15 years ago. We got used to him not being around or present at most rehearsals and writing sessions. When he decided to “retire”, I can’t say that I was surprised and actually a little bit relieved. We spent many years on the road with the three brothers and mostly had great times but being around each other that long takes a toll. There will always be room for Frank in this band if he or we decide it is the right time or thing to do,” Eddie Casillas explained.

There is a rumour that Efrem Schulz of Death by Stereo is the new singer of Voodoo Glow Skulls. Don’t believe everything you read on Wikipedia!

“We heard that same rumour and it was brought to our attention that it started with a false Wikipedia post. We know Efrem and his bands a little, but there has been no talk of him trying out. He actually has prior commitments with Death by Stereo as far as I know. Wishful thinking on some fans part I guess,” Eddie Casillas stated.

Voodoo Glow Skulls are known to blend humour and politics in their lyrics to make social commentary. Has President Trump’s politics influenced any of your new song lyrics?

“I definitely pay attention to politics and have always been influenced by the injustices of the powers that be, but Trump has made me decide to leave most social media platforms and ignore much of the current news. It’s disappointing more than ever before. That being said, there has been some minor influence on a couple of the new tracks,” Eddie Casillas declared.

Voodoo Glow Skulls gained a lot of exposure when they were on Epitaph Records and appeared on four of the Punk O Rama compilation CDs along with bands like Nofx, Bad Religion, and Pennywise.

Do feel nostalgia for the Punk O Rama albums? Is there still a place for punk compilations in an ever growing digital world?

“I’m pretty sure comps still exist, maybe not the same as the “Epitaph era” but that was the 90s obviously and tastes and styles change and come and go. There is probably always room for a good comp somewhere,” Eddie Casillas answered.

Voodoo Glow Skulls have appeared in Hollywood movie soundtracks such as Bio-Dome with Pauly Shore, and Mr. & Mrs. Smith with Brad Pitt and and Angelina Jolie. Which is the better movie, and which made better use of your music?

On August 26th, Voodoo Glow Skulls are playing a festival with Rancid and Dropkick Murphy’s in California.

After all these years playing is there still a feeling of excitement when you play a show or festival with bands like Rancid and Dropkick Murphys?

What is your favourite Voodoo Glow Skulls song to play live in concert and why?

Are the Voodoo Glow Skulls planning anything for their 30th anniversary next year?

“Every tour could be the last and we never know what’s gonna happen. If the next shows/tours get good to us then perhaps we will decide to continue and book shows. For now we have no plans passed November 20th,” Eddie Casillas admitted.

The upcoming Ottawa show is a must-see, as it could be their final tour.

“Voodoo Glow Skulls have always enjoyed and been excited about playing Canada the few times we have been but we still haven’t been enough times as we should have. This is the most rehearsed this band would have been in the last 15-16 years, if it is our last tour, please come hang out and help us go out in style,” Eddie Casillas concluded.

K-Man and the 45’s are also playing September 14th at Mavericks in Ottawa. Doors are at 7pm, the show is 19+, and tickets are $18. Purchase tickets online. For more information visit the event’s Facebook page.