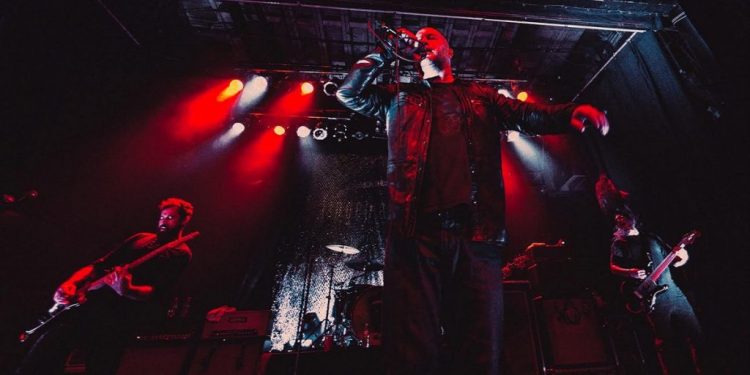 Timmins Ontario – Finger Eleven and Big Wreck will be co-headlining day two of the Rock on the River Festival in Timmins on Saturday, July 29th, 2017. Adam Gontier, the former lead singer and rhythm guitarist of Three Days Grace, will also be playing on the Saturday.

“We were just in the studio for ten days with producer Arnold Lanni who did our first two records. Being that it was the 20th anniversary of our first single ever (as Finger Eleven), it sort of made sense to revisit. We went in and did one song with him, and so far it’s turned out amazing. There will be new music released at the beginning of next year,” guitarist Rick Jackett stated.

That is exciting news for Finger Eleven fans. The band is best known for their smash hit song “Paralyzer” that ranked #3 in Canada and #6 in the United States back in 2007. The music for that song came together quickly during a jam session.

“The music for that song came really fast. We were doing a jam, we were ready to leave, but we promised our buddy that he could come and take photos of the band for his University photography class. We weren’t going to just pose, we were going to jam. We just sort of came up with the music for “Paralyzer”. We were like this is pretty fun, it’s different for us. It’s funky, and there’s just something cool about it. We gave it to Scott, our lyricist and singer. He wanted to write it from the perspective of guys like us at dance clubs who feel awkward. We’re there because someone asked us to come. We’re not there on our own volition, we don’t enjoy the dance club scene. The song was so successful we ironically started living out the character in the song many times. Because we’d be in a city and invited to a VIP party at a dance club. They’d put the song on, and we’d be living out the lyrics of the song, sitting in the corner just staring at people and not belonging there. It’s pretty funny,” Rick Jackett explained.

The following year, “Them vs. You vs. Me” was awarded Rock Album of the Year the Juno’s.

“That night was awesome. Because of the success of “Paralyzer”, there was a high for the band going into the night. I think we felt we had a good chance. At that point in our lives we had been nominated for 11 or 12 Juno’s and we had never won one, and we never won one since. That’s the only Juno we ever won. It was just one of those moments in time where like wow this is really happening. It still means something to me. I have the award on my mantle. I’m proud of it. It was a great year for the band. Those things are more like mementos than something you use for credibility. As a personal souvenir it’s a really cool thing to have,” Rick Jackett divulged.

Finger Eleven has had exposure on television shows like Gossip Girl, Scrubs, Smallville, Roswell, Third Watch, and in movie soundtracks like Scream 3. However the bands biggest exposure came from WWE wrestling. The song “Slow Chemical” was used as the entrance music for former WWE Champion and wrestler Kane.

“My favourite was definitely the wrestling. We were fortunate enough to record the main entrance music for the wrestler Kane. He’s been around for a long time, and he had this resurgence. He took his mask off, and he became the World Champion, and for that run of 4-5 years, our song was the song. It was really cool. It exposed the band to a global fan base. We made an incredible amount of fans off just that one song, because when he came out to the song it was fun and powerful. When we wrote the rift, we were thinking of our equivalent of the Dark Vader march for this big monster coming down to the ring and creating a monstery kind of rift. That was the idea of it, and then to see it come to fruition, and to see it weekly from a high profile character – it was a cool experience. There was actually a hashtag from fans who wanted the old Kane theme song back,” Rick Jackett added.

For the 20th anniversary of the album “Tip”, Finger Eleven have some shows focusing on that entire record. However, for the outdoor festivals it’s going to be a mix bag of songs and hits from their entire catalog.

“For the outdoor festival shows, it’s a mix bag. There are songs from Tip on the set list, but songs from other albums too. We want to bring the whole catalog with us. However we have been putting on “Tip” specific shows, just playing the songs on that album from top to bottom. That hasn’t left Southern Ontario yet, but there is a plan, talks about taking it across the country,” Rick Jackett disclosed.

Guitarist Rick Jackett still plays his very first guitar he got one Christmas.

“My very first guitar was a guitar my parents bought me for Christmas. They bought be a black Squier Strat, and they bought me the book “Are You Experienced” and the CD “Are You Experienced” and that was my Christmas morning. Since then, that guitar I frankensteind it. It’s still my main guitar. I switched the neck out with my second guitar. I had two Strats and I liked the neck of one and the body of the other. I’ve gutted it many times and switched the pickups many times. My very first guitar is my main guitar, but I have many other guitars that I’ve collected on the way, but my Squier Strat is probably what I play 90% of the music on, and it’s still my favourite guitar to play,” Rick Jackett reminisced.

“Somewhere in the early 2000s, we had a show, and when going upstage I smashed my face with my guitar and cut myself. I couldn’t feel my teeth. I went to my guitar tech and asked are my teeth still in my mouth I asked? Because I couldn’t feel my face – like someone had punched me in the face. I had smashed my teeth into my guitar, and there is an actual dental imprint in the body of my guitar from my front teeth… so it’s 100% my guitar. It’s a very personal guitar to me,” Rick Jackett reflected.

Scott Anderson, Sean Anderson, James Black, and Rick Jackett are all original members – dating back to 1990 and the formation of the Rainbow Butt Monkeys (the name of the band before Finger Eleven).

“This is the first and only band we’ve ever been in. This is our high school band. We were all friends before the band. Scott and Sean are brothers, and James and Scott met in middle school, so the bands actually been around since we were young kids. Scott brings his outlook on life and his lyrics and his voice. James is my musical partner in crime, it’s a yin yang thing. We’re just two sides of a coin, and we just get these songs. Sean brings stability and his bass. Sean is one of those rare cases where bass was his first choice. He loves playing bass, and he creates rhythm that James and I can’t provide,” Rick Jackett acknowledged.

“Musically it all comes together and makes the sound. We dabble in different genres and play different styles, no matter where we go with it, it all ends up sounding like Finger Eleven. We all bring a quality to the band that we’re not even aware of – we all bring something to this process. As people we are all a part of the foundation, and carry a part of the load to make sure the band is always working. We have a lot of respect for our band and making sure it does well,” Rick Jackett noted.

Members of Finger Eleven are excited to be sharing the stage with Big Wreck once again.

“I always love playing with Big Wreck. I’ve known Ian for a long time, and we played together with him with different forms of our respective bands. When we were the Rainbow Butt Monkeys we played with them. When he was Thornley he played shows with us in the US. It’s always awesome. He’s an incredible guitar player and a great guy. It’s always fun to play a rock show with another real rock band,” said Rick Jackett.

It’s going to be an exciting night of Canadian rock, and it’s all happening in Timmins Ontario on Saturday, July 29th – the second night of Rock on the River.

It’s going to be a great night! For more information on Rock on the River, including where to buy tickets and the complete line-up of bands, visit the festival’s official website.