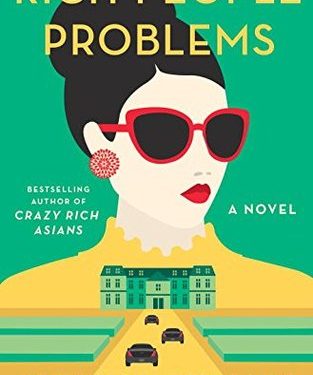 What problems could the incalculably wealthy Asian tastemakers and power players possibly have? More than you might think. For example, “Your regular table at the fabulous restaurant on the exclusive island where you own a beach house is unavailable.” Or, “Your airplane is forced to land before you can finish drinking your Dom Pérignon.”

Rich People Problems is the third novel in a series by Kevin Kwan that examines the lifestyles of Asia’s ultra-wealthy. While the previous two novels in the series, Crazy Rich Asians (now being developed into a major motion picture) and China Rich Girlfriend, focused on young bachelor and heir Nick Young and his attempts to introduce his middle-class non-VIP girlfriend into his extremely wealthy and snobby family, Rich People Problems turns the focus towards Nick’s grandmother, Su Yi. The matriarch and owner of Tyersall Park – the largest privately owned piece of land in all of Singapore – is on her deathbed, and the extended family convenes to wrestle what piece of inheritance they can in a mind-boggling array of family politics, traditions, drama, and vying for precedence.

Kwan’s latest novel reiterates his adept handling of both the central plot-propelling characters with their personal storylines and depicting the larger world of the ultra-wealthy through which these characters move. Rich People Problems provides an entertaining, and at times troubling, look at the family dynamics involved when the mantle of “head of the family” must necessarily be passed on, while giving middle-class and Western readers a glimpse of the gilded excess and consumption that would leave even Fitzgerald’s Jay Gatsby agog and dazed.

A lively and entertaining read, perfect for summer lounging by the beach (a private beach, of course).

Rich People Problems (released May 23, 2017) is available at The Cornwall Public Library, Coles in the Cornwall Square, and online at Chapters and Amazon.

The Book Nook: Review of Spaceman of Bohemia by Jaroslav Kalfař