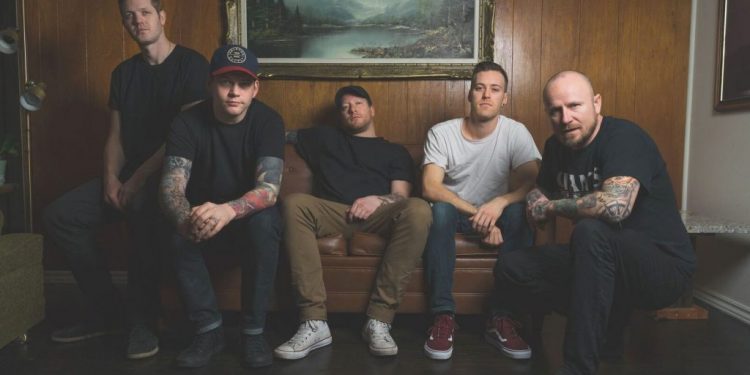 Ottawa Ontario – Comeback Kid are coming back to Ottawa on September 17th with a concert at The Brass Monkey. They will also be bringing with them a new album titled “Outsider” that will be released earlier in the month.

Lead vocalist and guitarist Andrew Neufeld explains how they are able to capture the essence of the band in the studio.

“Really, we just brought the ideas to the table in rehearsals and worked on the songs until they felt right. A lot of being in the studio was just documenting the songs until the final stages where we were able to put a little more personality and flare and were able to showcase some specific features more. We tried to be a little more obvious in the songwriting and themes this time around,” Andrew Neufeld explained.

The cover art on “Outsider” depicts a man in solitude, who is walking, and he has black smoke coming out of his head.

“The album artwork was an image done by Mike Parisella. He goes under the moniker @slimesunday. I suggested a few of his works to the band and a version of the current cover photos was one that connected with the rest of the band. We already had the album title and it was a direction we could agree on – which sometimes is a hard task when it comes to artwork. Between our guitarist Stu and the art department at Nuclear Blast we were able to put the packaging together,” Andrew Neufeld responded.

“Outsider” is being released on New Damage and Nuclear Blast Records on September 8th.

“We have some friends at New Damage / Dine Alone and have known them for years. Actually, Jeanna who handles us from the label used to work with Comeback Kid when we were on Victory Records as she previously ran publicity for them in Australia. We met with them and it seemed to make sense for the band. We are on New Damage in Canada, and Nuclear Blast Records in the rest of the world. So new beginnings and a fresh start all around,” Andrew Neufeld replied.

Comeback Kid collaborated with Chris Cresswell of The Flatliners on the punk/hardcore duet “Consumed with Vision” – one of many stand out songs on the new album.

“It was super fun. We had the parts all worked out in Vancouver when we recorded. I knew that I wanted to have him on the song because he is hitting a range that I felt would suit his voice better than mine, and I could harmonize with it well. So its a bit of a punk hardcore duet so to say. I flew back home to Toronto after recording out west and I invited Chris down to the studio. We tried a few things out that were already worked out. He had some ideas that we tried and we ended up using it all. I got him to do this kind of howl thing that I know he’s been doing with his voice and I think it turned out sick. We had a couple beers, he had me on his new podcast afterwards, and we called it a day,” Andrew Neufeld reminisced.

On the upcoming tour Comeback Kid are hitting the road with Stray From the Path and Counterparts, bands that they have previously toured with.

“We have toured with both of them before. We know they guys in both the bands so we’re looking forward to it. I think both bands have new albums coming out as well so we all are on a fresh touring cycle. Should be some exciting shows,” Andrew Neufeld exclaimed.

According to Andrew Neufeld, the band is a good place right now, because they are motivated musicians who still have fun together.

“I think the band is in a good place right now. We have had a lot of members come and go. I’m just happy we have a band filled with motivated and real musicians. We have a lot of laughs on tour but we definitely all do our own thing a lot of the time. Just comes from spending so much time on the road together. Jeremy the other founding member recently had a baby so its taken his “band dad” persona to a whole new real level. We definitely have a lot of fun together and they are some encouraging guys in my life,” Andrew Neufeld stated.

Comeback Kid has had numerous lineup changed and evolved since the release of their first album in 2003.

“Through the lineup changes I’ve really grown up being in this band. The world around us has changed a lot since 2003. We welcome it. We get to play a variety of different types of shows from big festivals, to tiny clubs and everything in between. It’s still inspiring, in 2017, playing in a hardcore band and travelling the world,” Andrew Neufeld disclosed.

The name of the band, “Comeback Kid” was inspired by a newspaper headline when Mario Lemieux returned to the NHL after defeating cancer.

“Thats exactly it. Scott our original singer showed it to me ( I was playing guitar when the band first started ), and it was a lot better than most of the shitty band names I had. This was back in the year 2000 right when we started playing our first local Winnipeg shows,” Andrew Neufeld recalled.

Andrew Neufeld, who grew up in Winnipeg, got his first guitar at 12 years old. He knew since a young age that he wanted to be a professional musician – a dream he made come true.

“I was 12 years old my parents bought me a Japanese Fender Stratocaster. I also had a small Traynor combo amp. The first song I learned to play was “Basket Case” by Green Day – I believe right when it came out. My guitar teacher thought they sounded like the Spin Doctors. I’ve always wanted to play music since I started playing piano at an earlier age,” Andrew Neufeld recollected.

Comeback Kid look forward to their return to the Nation’s Capital this September.

“I’m glad to finally play Ottawa again! It’s been a couple years. I remember when it seemed like we played the Babylon ever other month but it’s been forever now. Can’t wait to get back. Our new record “Outsider” is out September 8th,” Andrew Neufeld concluded.

Spectrasonic presents Comeback Kid, Stray From The Path, Counterparts, Gideon, and Rats on Sunday, September 17th, 2017 at the Brass Monkey. Admission is 16+ or 19+ to drink. Doors are at 6pm and tickets are $25 in advance + service charges.

Tickets available at The Brass Monkey, Vertigo Records, both Compact Music Inc. locations and online. For more information on the concert visit the Facebook Event page.